A game developed by several members of Blizzard North (the studio behind Diablo), Path of Exile is a free-to-play take on that style of gameplay.  A good one, at that - the game effectively forges a cashless economy, with equipment-forging items and skills being tied to gems that are slotted into weapons and armor.  Potion bottles refill on their own as you defeat enemies, and the game even goes out of its way to do another oft-maligned RPG element better - the character upgrade system here greatly resembles Final Fantasy X's sphere grid, having you travel around a board to gain stats and abilities, though you're not tied to any paths or locked out for large portions of the game and free to forge your character however you wish.  There's a lot to like in Path of Exile; perhaps most of all is the fact that, as mentioned, this game is free to play.  It's not pay-to-win either, with monetization mostly being relegated to customization options for your character, which definitely earns it a lot of points in my book. 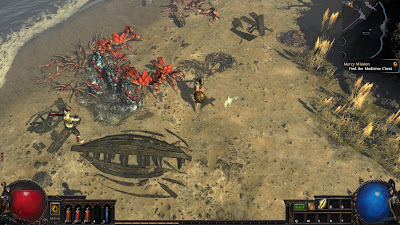