Monster Boy and the Cursed Kingdom

A spiritual sequel to the Monster World subseries of the Wonder Boy franchise, and who better to handle it than a talented team working in collaboration with the guy who developed the originals.  As you'd expect it plays very similarly to the old games, melding side-scrolling platforming, light RPG elements (mostly in the form of collecting money to upgrade your equipment), and mazelike dungeons and boss battles.  Monster Boy returns to the Metroidvania-like bent of Dragon's Trap - various items you collect have properties that allow you to break into new areas (like weighted boots that let you sink underwater), you get morphed into different monsters with differing abilities over the course of the adventure, and there's a full and sprawling map with quite a lot of secrets to uncover.  The visuals are colorful, well animated and generally charming, and the music matches the upbeat mood perfectly.  A fine followup to a cult classic series even without using the name proper. 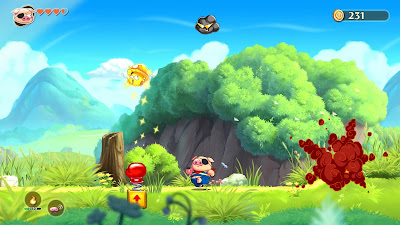