Collectible card games were all the rage in the early 2000s, and it seemed like every big Japanese company was trying to cash in (even Sega got in on it with Phantasy Star Online's third episode, CARD Revolution, which was... pretty strange).  Capcom took their own crack at it with the Battle Network franchise, and it proved to be quite a successful one, spawning six games, a number of spinoffs and even an offshoot series (Star Force) before being retired in 2009.  The core gameplay remains essentially the same, meshing real-time action with tactics.  Taking place on a 6x3 grid divided between your side and the enemy's, you get a random hand of five chips (serving as your weapons) and can pick ones that have a matching letter or type.  With them, you try to clear all enemies off the board as quickly as possible, earning more chips and/or money for doing so.  However, you also have to evade enemy attacks by moving around your grid, and use your chips well to ensure the enemies don't avoid your attacks and you waste your chips.  Some other things can crack panels (leaving a blank space on the field that can't be crossed over temporarily) or even turn panels from one color to the other, giving you or your foe more control over the field.  Pretty interesting stuff, but it ends up being a rather grindy experience; as per any collectible card game, you gradually refine and rework your deck throughout, working further toward a balance of chips that will serve you well in any scenario you face.  I can see why it became such a big series in the 200s, but like the collectible card game fad of the time, its relevance is mostly gone these days.  However, its gameplay style was reworked to great effect in One Step From Eden, blending roguelike elements and numerous different characters, game modes and mods into the mix, so in an odd way, its legacy lives on. 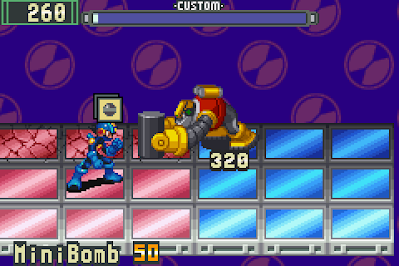