From the beginning, Lunar was a franchise that utilized the benefits of disc-based technology to provide an visual and audio experience on par with a good anime, and that element has become a key part of its identity; even the developers have said they couldn't imagine doing it any other way.  So to learn that there was a port of the first Lunar to the Game Boy Advance - a portable system with relatively minimal specs for streaming video and audio - was a little shocking, to say the least.  However, they did a good job considering the hardware they had to work with - they obviously couldn't do animated cutscenes, but they do utilize some stills from the CD versions to convey the story and dialog in those instances.  All of the player sprites and animations are redrawn and look quite good, and the core gameplay is essentially the same, with more story beats added throughout and a bit of longevity added with a few sidequests and some collectibles.  It may not have the big-budget presentation and epic feel of its console counterpart, but Lunar Legend is a serviceable down-port of a classic. 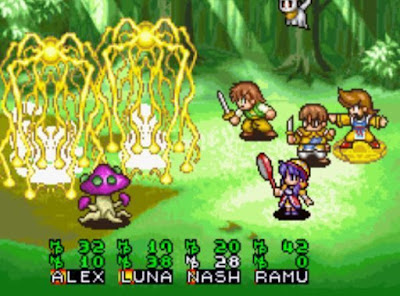