This one held some promise for fans of Game Arts and especially the cult classic Lunar series, especially at a time when the newly-released Nintendo DS was still looking for a good RPG to its name.  Japan Art Media had previously contributed to the Lunar remakes on the Playstation, as well as the surprisingly decent (if not amazing) GBA remake of the first game, so surely they'd have what it takes to make a worthwhile sequel to the series, right?  Well, sadly, that ended up not being the case.  This is in no small part due to the game trying to reinvent the wheel when it came to mechanics.  Running to avoid monsters lowers the party's HP, which rather defeats the purpose of doing so in the first place.  One can choose to earn items or experience from battles (though, for no adequately explained reason, you only get one or the other at a time - never both).  Equipment breaks with repeated use and money is rather scarce, so even keeping your party equipped is a major issue.  But perhaps most frustratingly, the movement-based strategic combat of Lunar is replaced with a simple turn-based system, and one cannot even target enemies of their own volition - they simply pick an attack and the game selects for them, which takes a huge strategic element out of combat and simply turns it into a long sequence of spamming attacks.  The party has also been downsized to three characters - half that of the two mainline entries - which is just a bit baffling.  Even the plot holds little of interest, with some downright dopey writing, tons of tedious backtracking, bland characters that don't have anything particularly memorable about them (especially compared to the first two Lunars), and a plot which is just a poor retelling of the first game's with no fresh twist put upon it.  Among RPG fans, Lunar: Dragon Song is synonymous with squandered potential, and given that its predecessors are regarded as genre classics, it's all the more disappointing for it. 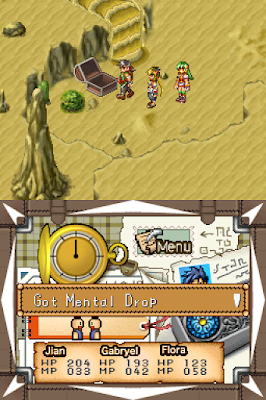