Capcom's second attempt at an original Zelda was Minish Cap, and it has a pretty creative concept - Link shrinks down to sneak into areas he couldn't before and encounters a miniature race called the Minish along his journey.   Like their first attempt, though, the execution leaves some things to be desired.  The game feels rather short and unsatisfying overall, with only six short dungeons and some rather tedious sidequests in the form of Kinstones and Figurines, both of which just feel like cheap filler rather than a well-implemented mechanic.  Most of the end-game bosses are annoying as well, requiring the player to strike numerous targets at the same time and punishing them with damage or prolonging the fight until they get it right.  Finally, Ezlo is easily the franchise's worst sidekick, constantly interrupting the game to blather unfunny dialog or explain extremely basic mechanics to you; if you thought Navi was annoying, you haven't seen anything yet.  I did ultimately finish the game, but I really have no desire to play it again.  If you want a good portable Zelda, stick to Link's Awakening. 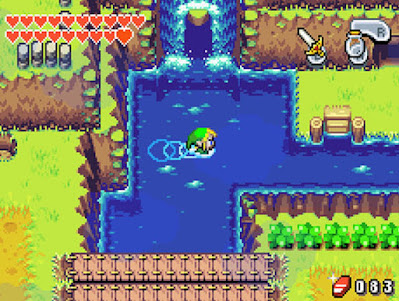