Released a year after Capcom's Game Boy Advance port of Link to the Past, which included a multiplayer minigame called "Four Swords", this was Nintendo's attempt to create a more full-fledged version of the concept.  Unfortunately, it ends up being much more of a hassle than it's worth. You can't use standard controllers in anything but single player mode; instead, each player is required to have a system link cable and a Game Boy Advance.  This does allow for the larger game to be interrupted when players enter caves and houses and such, but still; why not just have split screen as an option?  Even beyond that, though, the game is pretty shallow, split up into strictly linear stages and mostly just consisting of farming items or simplistic monster-slaying, or having to split up and stand on various buttons to open a door.  It's a great looking game, utilizing a more detailed version of Link to the Past's aesthetic, but it's a mediocre co-op experience and definitely one of the weakest Zeldas.  Unless you have a lot of money to burn or are just intent on owning every Zelda game regardless of its quality, skip this one and read the manga adaptation instead.  And if you want a good couch co-op experience for the Gamecube, play Phantasy Star Online Episodes 1 and 2 instead. 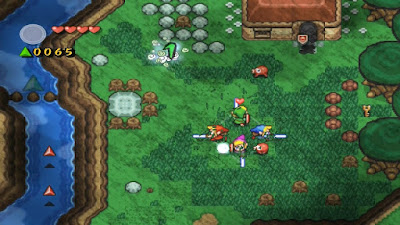