Originally released as an episodic mobile phone game and later expanded into a full 3D remake on the DS, Kingdom Hearts Re:Coded is yet another entry in the popular and long-running franchise, following the exploits of "Data Sora" as he tries to recover lost information in Jiminy Cricket's journal.  To that end, he revisits many worlds from the previous Kingdom Hearts games, defeating monsters and finding clues to repair data.  The leveling system in the game is relatively clever one, having the player install chips onto a CPU motherboard to expand Sora's abilities and stats, while the gameplay builds to a degree on what was done in Birth By Sleep, with the player gradually building momentum by quickly defeating enemies to grant Sora temporary powerups and ending with a finishing move, and utilizing abilities via a quick, preconfigured "Command Deck" rather than having to navigate menus.  It plays alright on the DS, but the sheer amount of retreaded ground and overall monotonous design made it one I got tired of quickly.  I opted to watch the plot digest on the HD compilations instead of playing through the entire game, and honestly, I don't think I missed too much. 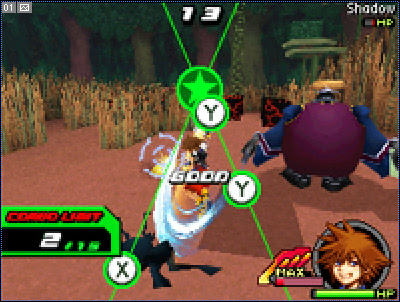