Essentially to the Kingdom Hearts series what Ground Zeroes was to Metal Gear, BBS:AFP is a glorified demo, showing off some of the technology for Kingdom Hearts III by telling a short prequel story.  Taking place just after Birth by Sleep and following Aqua as she ventures through the realm of darkness, the game showcases the smoother movement and combat system changes of Kingdom Hearts III (most prominently Situation Commands, which add a  much more dynamic feel and a thrilling momenum to battles).  The campaign itself is quite short, being completable in about two hours, but Square also attempts to give you quite a bit of content in the form of unlockable costume pieces and 51 optional objectives to complete.  As per series norms, more content is also unlocked once the campaign is completed, including a Boss Rush, so you're getting quite a bit of gameplay here.  Maybe not enough to justify shelling out two figures in itself, but the fact that it comes on the same disk as Kingdom Hearts 3D and a plot summary of Kingdom Hearts χ (chi) ensures you won't feel short-changed. 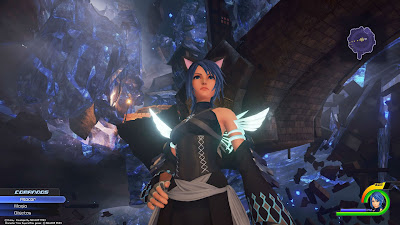