Arguably the strangest take on a fantasy RPG world ever put to code, Goat MMO Simulator has you playing as a goat and interacting with a high fantasy world.  But does this ridiculous concept actually work, or was this just an ill-conceived idea and a lackluster execution thereof?

I have to admit, the concept of this one alone intrigued me; I mean, what other MMORPG out there lets you play as one of nature's most majestic creatures or a microwave with legs?  Even more strangely, while there is a fee to purchase the game, there are absolutely no monthly subscription fees or pay-to-win lootboxes - a rarity for games in this era.  I'm unsure how they pay for the servers and maintenance thereof.

When I started the game, though, it definitely was not what I expected.  Put simply, this is one of the most unconventional MMORPGs I've ever played.  This is perhaps nowhere more evident than in the set of moves you're given.  Regardless of your class choice, your character has an elastic tongue that can attach to objects and pull them (or yourself) around, and via this, you can pick up virtually anything in the landscape (NPCs included) and put them in your backpack, then release them later - bizarre, but handy for turning in quests without having to backtrack and waste several minutes.  One also oddly has the ability to ragdoll on command, earning points if you land on your feet after a big fall.  Using these, as well as a generic headbutt attack and goat kick, you can seemingly manipulate, launch or destroy almost anything, and it's all done in a real-time physics engine - pretty impressive for a persistent-world MMO, I must say.  But on the other side of that coin, it seems you can barely walk ten feet without knocking something around or tripping over an object, which makes movement more annoying than it should be.    There are some class specific abilities, several of which seem to be useless  - the magician can throw out playing cards, but these seem to garner no reaction from NPCs or enemies alike, while the rouge (sic) can go invisible, but every character I met seemed to act as if I wasn't.  Knocking over anything that isn't nailed down and even attacking NPCs gives experience, effectively rewarding the player for going on destructive rampages.  Odd approach, but handy for gaining some extra experience when you're short of gaining another level.

The game clearly works on some levels, but not on many others.  Enemies also don't seem to be capable of harming you; in fact, there isn't even a health meter anywhere on the HUD.  Even environmental hazards like spike traps, lava and fire don't seem to be capable of killing you or causing any lasting harm - no matter what hazards I was hit by or fell into, my character bounced right back up with no visible damage done. Very bizarre choice for a game in a genre where such things are usually game-enders (or at least deal damage) when triggered.
The coding and collision detection for the game is also bizarrely incomplete.  Any time I attempted to swim, it wouldn't play the proper animation, instead just having my goat ragdoll while maneuvering around.  Too many times to count I got stuck in scenery, bounced off innocuous objects, was jiggled and ping-ponged around by buggy physics or even catapulted off the map entirely into oblivion.  Thankfully the developers are aware of this, and you always seem to jostle back into bounds or respawn when you fall out of the world with little trouble, so kudos for that.  But if all else fails, there is also a Respawn option in the pause menu that will put you back at the starting point.  So while the game may clearly be far from finished, you can at least never become inescapably trapped.

Goat MMO also features some of the jankiest physics I've ever seen in a professionally-released product; as mentioned, virtually everything in the game can be knocked around and so can you, but I saw quite a lot of jiggling physics objects, ragdolling and and model distortion in the time I played.  It also seems to be stunningly easy to get flung out of the game world entirely, with seemingly innocuous things like awnings and cannons able to launch you distances even Bugs Bunny could barely visualize.  However, this does actually work to your advantage at times, allowing you to traverse huge amounts of terrain in moments that would take several minutes to walk.
Goat MMO seems to have a strange case of Shrodinger's Netcode, too.  The game works, as evidenced by my ability to not get dropped from a session even when the action and physics bugs got really intense, but I don't think a single player interaction worked in the entire time I played.  The in-game chat works, though I was unable to get a response from other players when I typed.  I couldn't even interact with nearby players owing to horrendous lag; they would constantly jump around or get stuck "skipping" back and forth over the same terrain like an old record.  At times, I couldn't even hit them with attacks or make contact with them physically.  Some character names seemed to be displayed wrong as well - the king's name showed as "Natalie Jacobson" in my game, and I'm pretty sure that isn't correct.
On the other hand, the game is clearly aware of its shortcomings, often poking fun at its premise with ridiculous quests like retrieving apples for a character named "Steve Works" or retrieving a Demon Horn from a legion of hell-cows (a Diablo reference) armed with laser eyes (decidedly un-Diablo).  There are numerous easter eggs to discover too, including what I think is actually a reference to Xenoblade Chronicles - two enormous Mer-men are battling in the far distance off the coast at a certain point on the map.  Coffee Stain's philosophy of design seems to be that if you can't win with content, win your audience over with humor instead.

And that sums up Goat MMO Simulator as a whole too.  While clearly unfinished and not ready for prime time despite being put on several storefronts for actual money, it remains an oddly charming game.  Strangely fun in spite of its flaws, and often because of them, you're never wanting for things to interact with just to see what happens.  Goat MMO is an odd instance of a clearly broken game being more fun than most working ones. 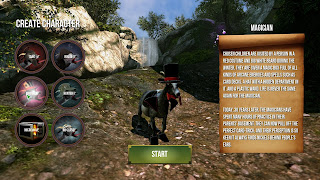 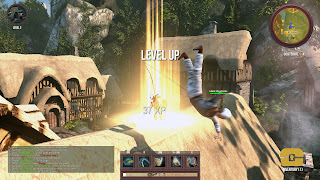