A spinoff of the prolific Yakuza franchise, Judgment marks a darker turn for a series already steeped in organized crime and all the brutality that entails.  Playing as disgraced attorney-turned-detective Takayuki Yagami, you find yourself in the midst of a complex plot involving several yakuza groups and a serial killer apparently targeting them.  Appropriately, Judgment puts more focus on this than simple combat, having you examine crime scenes, videos and photos for clues, question witnesses and tail discreetly tail suspects, as well as utilize disguises and lock-picking to access certain areas.  While not the best implementation of these ideas (they only ever come up in story segments and mostly just boil down to menial 'go here, click on this' task lists), it adds some new elements to the gameplay without intruding too heavily on the Yakuza format.  For that, you still get to venture around the city, battle thugs who frequently jump you, take part in various minigames and side stories, and complete a staggeringly huge number of optional goals to fill out achievement lists.  Basically, it's Yakuza with a dash of Phoenix Wright or LA Noire; if that sounds good to you, you'll probably enjoy Judgment. 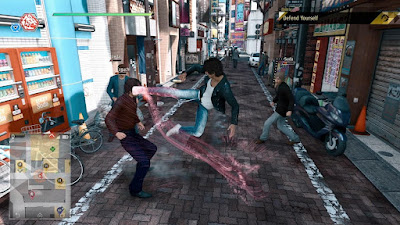