Hydlide is a legendarily bad game among western gamers, though its reputation is somewhat undeserved - the game was originally created for Japanese computers in 1984 but was ported over to the NES five years after the fact (and two years after Zelda), so of course it was very lackluster in comparison.  Its incredibly limited animations and music, bloopy sound effects, password based saves and much choppier movement were not exactly seen favorably, but its most derided element is its contact-based combat.  Simply put, the player runs straight into the enemy, trading a dozen blows or so per second, until either they or the enemy falls (though you can somewhat tilt this in your favor by attacking the enemy from the back or side).  Your reward for a victory is one tick on your experience bar and the opportunity to retreat onto grass and wait for your HP to refill to try again.  Then you add in cryptic puzzles, cheap deaths from innocuous things like touching the wrong tree or being eaten by a rock (yes, really) or entering a dark room without a light and dropping dead, and you have a very frustrating experience.  It may have been a well-received game in Japan in 1984 and an inspiration for the Ys franchise, but it's one that's best left as a historical footnote, because it's really not fun to play today. 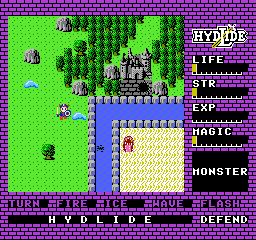