A science-fiction RPG developed by Konami Computer Entertainment Tokyo with the intent of besting Metal Gear Solid in terms of design (yes, really).  Every serious gamer knows about Metal Gear, of course, but the fact that nobody really talks about Hybrid Heaven these days shows that it didn't have nearly the same impact.  Not for a lack of trying, though, as Hybrid Heaven is surprisingly unique among action-RPG hybrids.  Outside of battle you jump platforms, crawl under low doors, hit switches and disable robotic drones and traps with your pistol, not unlike the Tomb Raider games.  Once you encounter a humanoid enemy, however, the game shifts into a combat mode that somewhat resembles a cross between a fighting game and Final Fantasy's Active Time Battle system.  You have a Power bar that fills over time (faster when standing still), and once it fills abut a quarter of the way, you can pick one of several moves from a menu to perform, doing more damage the more full it is.  There's a lot of them, too - jabs, hooks, kicks, throws, armbars, and so forth, and you can set up combos between fights to do more damage and potentially add a free extra hit or two if you find certain effective sequences.  Likewise, when the enemy attacks, you're given several choices - you can step back to try and avoid it entirely, block to reduce the damage it deals, or even go for a counterattack to turn the tables back on them.  Being grabbed behaves similarly, as you're given the option to try and shake out of it, take the fall intentionally to reduce damage or even turn the throw attempt back on them.  Strangely, the game utilizes both traditional levels as well as granular stat growth, but in addition to your core stats (HP, Offense, Defense, Speed, etc), your limbs all power up individually too, gaining more offensive or defensive power through battles the more you use them or they get abused by enemies.  It's not quite as fun as you'd think, though - while you do have to be at a specific range to land attacks (you can't punch someone from several paces away, obviously), countering, escaping throws or avoiding hits while downed just seem to come down to rolls of the dice, which feels like a missed opportunity - being able to recognize incoming attacks and counter them consistently could have made for a more fun and strategic experience.  There isn't much attempt made to balance out your wide repertoire of moves, either - in fact, you can generally stick to your basic jabs and kicks for the most part, and once head-targeting attacks become available, they're very abusable - they tend to knock down and stun enemies very often, leaving them vulnerable to followup hits.  Its campaign also isn't overly long, but enemies in new areas tend to take large leaps in power, requiring you to stop and grind in addition to spending a good amount of time learning how to counter all of their moves.  Its level design is rather drab too, with a lot of large empty rooms and narrow corridors; they definitely could have taken a cue from their "rival game" here, as every room in Metal Gear Solid felt distinct and had an equally unique purpose.  An interesting experiment whose components don't quite come together, Hybrid Heaven definitely isn't the most well-regarded or remembered RPG of the time period; you didn't really have a lot of other options on the Nintendo 64, though. 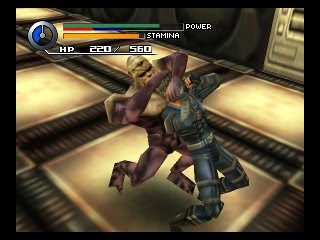