A historical RPG set in early 15th century Bohemia (today's Czech Republic), Kingdom Come strives to be a classless open-world RPG like Elder Scrolls, letting the player solve any obstacle they encounter in a number of ways and make their name in the world in any way they see fit.  At least on paper, that's what they say.  The whole time I played was a strictly railroaded experience, forcing me to go from one premeditated event to the next and fail every skill check I encountered because they all start at extremely low values and there is simply no way to raise them between then and there.  It also had the Mass Effect problem in that, while you're given said choices, few of them seem to actually make any difference in the long run; you might get a different dialog line or two from the majority, but that's really about it.  Then team that with clumsy, unintuitive stealth segments, horse riding that's more cumbersome than useful (I got hung up on scenery and killed too many times to count in an overlong, unskippable chase sequence) and combat that strives to be realistically based around blocking and parrying in heavy armor but mostly just comes off as extremely clunky and annoying, and you've got a game that quickly became a chore to play.  Kingdom Come: Deliverance is clearly very well-researched and has a lot of attention to detail in almost every element of its setting, but maybe its developers should have just written a book instead, because it's not very fun as a game. 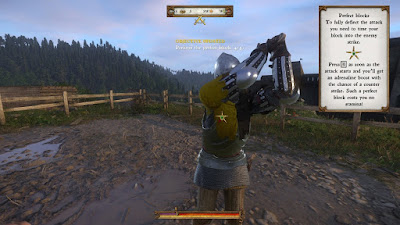