Drakengard was a game met with both praise and criticism upon its release in 2003, and upon playing it, I can certainly see why.  It's a generic hack-and-slash reminiscent of the Dynasty Warriors series, though it lacks the smooth design and strategic bent of those games - the controls are stiff and movement somewhat clunky, and gameplay mostly consists of monotonous enemy bashing with the same two-second music loop repeating constantly for the entire level (which can sometimes go on upwards of thirty minutes).  There is also the occasional Panzer Dragoon inspired aerial combat stage, where one can lock on to enemies and unleash a barrage of homing fireballs to take them down, but these also get very repetitious because there simply isn't a lot to them beyond point-and-fire.  Drakengard is one of many games that tried to carry itself solely on its writing, presentation and production design rather than putting any real focus on its gameplay, but it does at least do an admirable job there - the story is a rather complex one despite its simple premise, cutscenes are well-animated and the voiceover is surprisingly good for 2003, and the characters are all complex and morally ambiguous, fitting perfectly into the grim setting.  It may not be worth the inflated prices it commands ever since Yoko Taro's newfound popularity with NieR: Automata, but if you can find a copy, you're in for a good story wrapped in a rather tedious gameplay experience. 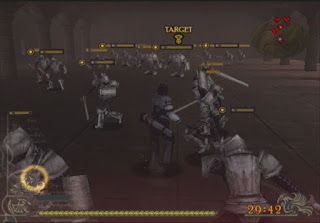