A direct sequel taking place eighteen years after the original Drakengard, it also took some criticisms of the original to heart.  The gameplay is much more refined this time around, with tighter controls and more variety, allowing you a larger skillset and even some Devil May Cry-esque launchers and air combos, allowing for some more visually distinct combos and gameplay variety (but with little difference in terms of overall damage) as well as being able to block and side-dodge to evade attacks.  Yoko Taro was not involved in the game's creation this time, though, and the experience is definitely weaker for it - characters are rather stock and the story, while still possessing some dark and grim themes, feels much more generic overall.  It also lacks the cinematic flair of the original, with most key events now simply being portrayed in-engine and with still character portraits doing the talking.  A step forward in some ways but a step back in others, Drakengard 2 is a passable hack-and-slash game, but definitely not as memorable as the original despite its improved gameplay. 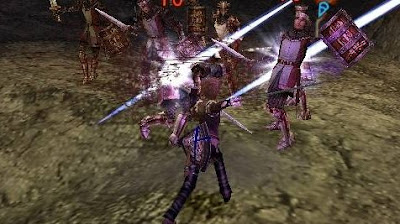