One of the more divisive Castlevania titles, Simon's Quest was the first in the series to take on an RPG format, adapting the action-platformer gameplay of its predecessor into a more open and non-linear experience where solving puzzles and purchasing items was just as important as vanquishing foes.  To this end, the game works in towns, purchasing upgrades to one's equipment, gaining levels for more power, and conversing with NPCs and finding hidden messages to learn hints and uncover useful items.  However, some troubles quickly began to show themselves, with a world that was confusing to navigate (with stairwells up and down leading to new areas on the overworld), unclear puzzles made more obscure by a clumsy translation, and some rather lackluster design at times.  The most prominent example of this being the few bosses in the game, which were laughably easy overall.  Using a clunky password system instead of a battery backup for the NES port probably didn't help its case either (though it is at least only 16 characters long).  Still, the franchise's impeccable standards for atmosphere, music and tight core gameplay remained in place, making this a flawed but enjoyable title.  Just bring a walkthrough along, because you're going to need it, especially if you want to get the best of three possible endings.

(Fans of ROM hacks may also want to check out "Castlevania II Redaction", which addresses several criticized elements of the game - notably speeding up the text and day/night transitions and rewriting much of the dialog to provide useful clues.) 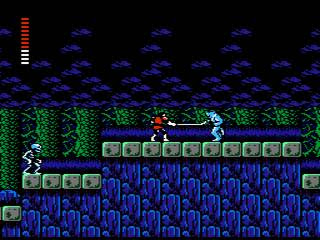