In the same vein as the original BS Zelda, Inishi no Sekiban (translated as "Ancient Stone Tablets") is a reworking of Link to the Past, this time with an added narrative (voiced in Japanese and in text at the bottom), reworked episodic gameplay, a time limit and a score table, challenging the player to complete two dungeons and collect as many rupees as possible before time expires and possibly (in the 90s when it aired) earn prizes.  Also somewhat unusual is the fact that the player doesn't control Link in the original release, instead utilizing their avatar from the Satellaview's BIOS menu in game and some of the text changing accordingly.  Other than that, this is much in the same vein as the original, with reworked dungeons, timed events that can grant the player bonuses like temporary invincibility or unlimited bombs for a short while, and a clever new twist on LTTP for those who know the original game like the back of their hands.  Like the first BS Zelda, it's only available nowadays through emulation, but it's a great piece of history that's well worth a look for any serious franchise fan. 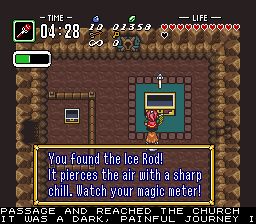