The third Castlevania game to get a Game Boy Advance release, and like most post-SotN releases, it follows in that game's mold, giving the player a vast castle to freely explore and new abilities to explore it as they defeat bigger and tougher bosses.  Aria of Sorrow's new twist is the Tactical Soul system - by defeating enemies you have a chance to absorb their abilities and use them for yourself.  These abilities can be offensive (throwing bones, daggers, fireballs etc), defensive (restoring health or deflecting projectiles), or give passive benefits like higher stats, spotting secrets or immunity to certain status effects.  These abilities can also be mixed and matched to suit your playstyle, which is quite a lot of fun to experiment with.  I can also say its easily the most entertaining game in the series after SotN, so if you can track down a copy, it's well worth a look. 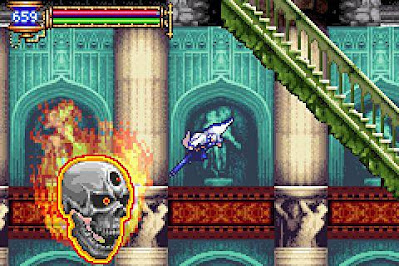