While I wouldn't class the original Borderlands as a masterpiece, it was a relatively fun game overall, with a lot of focus on over-the-top battles, a silly atmosphere and a bunch of characters and weapons to customize your play experience to your liking.  For better and worse, Borderlands 2 delivers more of everything - more playable characters, more randomized weapons and properties, vaster and more convoluted stages, more loot, character upgrades that stack over playthroughs, much tougher and cheaper enemies that seem to kill you constantly in the later stages, and *sigh* microtransactions.  Characters, missions, skins and more are now paid DLC, and the sheer amount of it is pretty groan worthy as it far exceeds the sticker price of the game. More groanworthy is the new focus on Family Guy caliber humor, with characters endlessly rambling out toilet jokes and "edgy" humor and seemingly never giving you a moment's rest from it, making it very grating in short order.  Some might say the first game was too quiet and had limited replay value in comparison, but if this is the alternative, I'm good.  Sometimes, less is more.  Much more. 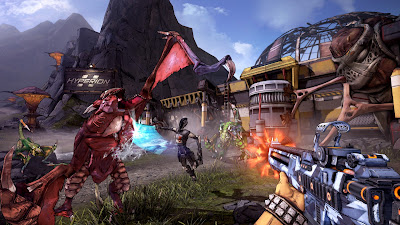