A game created by alumni of the short-lived studio Vigil Games (the name behind the first two Darksiders games), Battle Chasers: Nightwar certainly has a similarly energetic visual style, but its gameplay couldn't be more different.  A mostly linear RPG where one moves across a linear set of points on a map, battling enemies and occasionally exploring dungeons, both fixed and procedurally-generated, in search of randomly generated loot and to advance story beats.  Combat in the game is pretty standard turn-based fare, though with a few twists added - Overcharge is generated from normal attacks, which can add extra effects to other moves, and stackable status effects and buffs add a layer of strategy.  Dungeons also have adjustable difficulty levels, with harder settings having more dangerous enemies but also better loot to discover.  Crafting is a key component too, letting you create new equipment or potions to restore health, mana or buff stats, and there's a minigame or two along the way to prevent things from getting too monotonous.  It doesn't do a whole lot different from other turn-based RPGs, but its well-written narrative, stylish visuals and solid gameplay make it a game worth checking out.  $30 may be a bit steep for what you get, though, so you might want to wait for a sale. 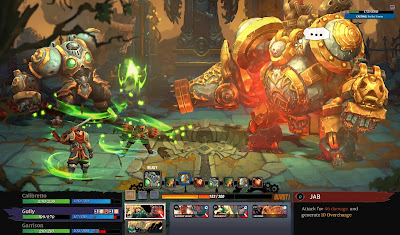