Barkley, Shut Up and Jam: Gaiden

There is a good reason I generally avoid playing, let alone reviewing, games made in readily-available game creation kits; by and large they tend to be boring, low-effort works with no concept of balance, design theory or even a hint of originality, swiping assets left and right and usually just aping other games' ideas with nary a fraction of their quality.  Barkley, Shut Up and Jam: Gaiden is at least a competently-made game beneath its recycled assets, feeling like a 16-bit RPG with some creative combat mini-games reminiscent of titles like Paper Mario, but it quickly slips into another all-too-common pitfall indie developers fall prey to: sheer arrogance.  What could have been a fun game is dragged down by being packed to the brim with inane purple prose, excruciatingly unfunny jokes that go on five minutes too long, and each save point the player encounters triggering lengthy, self-serving rants about western and Japanese RPGs - acceptable content for a blog, perhaps, but it has no business being anywhere near an actual video game.  Basically, it's Family Guy's definitions of 'wit' and 'comedy' put into a game engine - grating dialog, unlikable characters, self-righteous preaching and endless "hey, remember this" references masquerading as 'humor'.  The author certainly seems to think all of this is very clever and makes him look like the coolest guy in the world, but I personally just got sick of it and threw the whole thing in the Recycle Bin after the first couple of hours.  It says quite a lot when a game is free, yet you still feel cheated after playing it.  Not to mention the fact that the real Charles Barkley is very vocal about not wanting to be viewed as a role model, so he probably finds the people who build a literal religion around quoting some unfunny moron's fangame that bears no similarity to his actual life and post memes hailing him as some messianic figure a la Chuck Norris incredibly disrespectful. Way to show how much you care about a person you allegedly admire, morons! 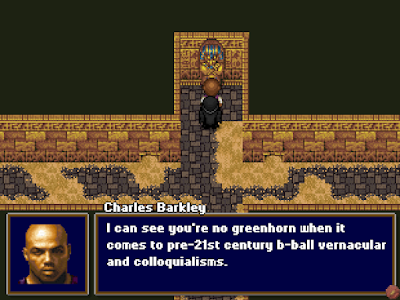