A spiritual successor to the original Bard's Tale trilogy released for various computer formats in the '80s, the gameplay is changed up to be a top-down hack-and-slash adventure game rather than a turn-based dungeon crawler.  Sadly, it's not a particularly great one; in fact, in terms of action it's mediocre at best, with very little to differentiate it from any other game of its like other than some clunky attack animations.  The true selling point here is the game's sense of humor, having a rather uncouth protagonist, a lot of genre-savvy jokes, ridiculous characters and moments (including a few Willy Wonka-esque song numbers), and most memorably of all, a narrator who outright despises and frequently mocks the protagonist (voiced by the late, great Tony Jay).  Even the developers were seemingly aware of the game's shortcomings, as on the recent releases for the Playstation 4 and Vita, using the built-in cheats does not disable any of the trophies one can earn, allowing one to skip most of the game's least interesting element.  So while not a particularly amazing experience, if you have ten dollars to spare, want to have a few laughs and earn an easy Platinum trophy, this is one you might consider. 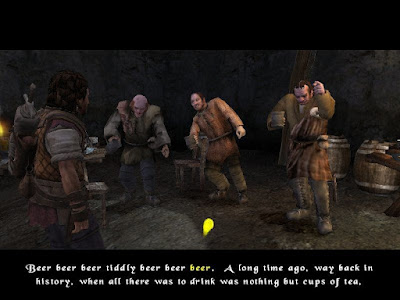