The second spinoff of the ever-popular Mega Man franchise was a very different turn, going from a 2D linear action game to a 3D open-world story driven experience set in a very different universe from the earlier games; seemingly an intended competitor to the highly successful Ocarina of Time on Nintendo 64.  But does Mega Man Legends prove to be a worthy adventure, or do the PS1's limitations simply bog it down? 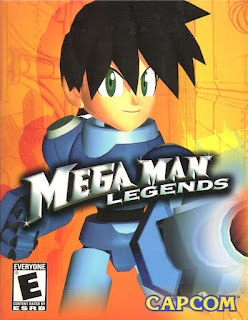 Mega Man began in the '80s and quickly became a fan favorite franchise, with five sequels on the NES alone and numerous spinoff series in subsequent years that took it in all sorts of different directions - from open-world action titles to choose-your-own-adventure games to card-collecting RPGs.  It's mostly fallen off in recent years save for the token compilation rereleases, but the dozens of games and spinoffs the franchise has spawned continue to have a strong fan following to this day for their formulaic, yet effective design and charming scenarios.

Mega Man Legends got attention for being the first series spinoff to debut on the Playstation, as well as the first Mega Man branded game to make the leap to 3D; not an easy thing for many fans to swallow after no less than seventeen previous games stuck to a 2D format.  It was another spinoff game too, seeming to take place in an entirely separate universe from Mega Man and Mega Man X, which led many to question why they didn't just make a new IP instead.

Upon starting up the game, you quickly learn that it doesn't follow the Mega Man format very closely at all; there's no Robot Masters to fight, special weapons are assembled from parts and upgraded with money (dropped by defeating enemies) rather than through boss battles, and in true RPG fashion, MegaMan starts off with rather rudimentary equipment that you gradually upgrade over the course of the game; said upgrades are built from parts (including your helmet), purchased or found as the adventure goes on.  Even your basic mega Buster is pretty weak at first, gradually being upgraded with parts that improve its specs - Attack, Energy, Range and Rapid - which fit into two slots (later upgraded to three).

Another thing you notice immediately is the very awkward control setup the game uses.  As it was built for the original Playstation before analog controls became standard, it uses a similar awkward "Tank Control" setup to the Resident Evil games - you turn left and right via the shoulder buttons, move forward and back with Up and Down on the D-Pad, and can sidestep via Left and Right.  Fortunately, this can be made slightly less awkward via the Options Menu, which allows you to sidestep via the shoulder buttons and rotate via the D-Pad, but it still feels a bit off, especially if (like me) you played Ocarina of Time on the Nintendo 64 beforehand.  Aiming is similarly awkward; like OOT you can lock on to your enemies, but bafflingly you cannot move while locked on at all, which leaves you very vulnerable to attack.  Fortunately your shots will automatically hone in on enemies that are centered on the screen even as you side-strafe, so there is little reason to use the lock-on save to occasionally hit an enemy above or below you.  Because of the digital controls, jumping is awkward too - you basically jump straight up or forward a fixed distance with no in-between.  Thankfully there isn't a lot of precise platforming in the game, but it is annoying when that comes up.

Where the game does shine, though, is in its presentation.  The game goes for an anime-esque presentation with colorful visuals, a striking style of design and characters that manage to be surprisingly distinct and expressive despite the low-poly aesthetic.  While there are no pre-rendered FMVs, there are quite a lot of cutscenes with full voiceover (which is surprisingly good for the time) and even some solid motion-captured animation for all the characters in them.  The Bonnes - recurring antagonists with an antihero bent - are easily the show-stealers, with some downright hilarious scenes and great acting every time they're onscreen - they even got their own spinoff game later with "The Misadventures of Tron Bonne", and Tron also appeared as a playable character in two of the Marvel VS Capcom games, so I'm definitely not the only one who thought so.  Even the music is quite nice - while nothing amazing, it's fitting, distinctive and catchy, though oddly most dungeons don't have it and simply utilize ambient noise instead. Basically, it feels like a good late '90s anime in video game form, so that keeps you playing through the gameplay frustrations.

There are quite a few of said frustrations throughout to be sure.  There are some pretty abrupt leaps in difficulty even early on - you go from a pretty easy starter dungeon straight into three consecutive missions topped off with boss battles, which is a pretty awkward way to start off any game, let alone one where you've had little chance to learn the mechanics and upgrade your character yet.  Normal enemies take similar leaps too - you go straight from weakling bots that die in only a few shots to gigantic monstrosities that take dozens of hits and will constantly knock you around, all requiring that you defeat them through long periods of circle-strafing or heavy subweapon fire.  Weapon upgrades can also be extremely expensive, requiring you to grind money for long periods of time to afford them.  There is also at least one instance where you can save in a place before another series of difficult boss battles, potentially making the game unwinnable if you don't have the parts on hand to defeat all three of them back-to-back.

Mega Man Legends is a relatively short game, clocking in at about eight to ten hours for a first playthrough - slightly more if you make a point of doing all the side content and minigames.  There is a fair amount of things to do not strictly related to the main quest - numerous characters will give out side missions and rewards once you complete them, and though there are not many dungeons in the game, each has quite a bit of hidden treasure to find, both in chests and hidden in various holes in the walls (which can be a bit hard to spot at first, as they don't look much different from the normal wall textures).  Minigames include a TV game show where you burst balloons, kick balls at targets or maneuver through obstacle courses with your rollerskates, and there are two difficulties to unlock after you finish the game; strangely, you're required to beat the game on Hard mode to unlock Easy mode.

All in all, Mega Man's leap to 3D isn't the smoothest, but far from the worst I've seen (and still leagues better than Mega Man X7 on the Playstation 2 - a game I've gone on record as saying is worse than the infamous DOS Mega Man games).  Its gameplay is rather awkward, clunky and weirdly balanced and the overall short length a bit offputting, but the strong presentation, captivating characters, interesting (and surprisingly detailed) setting and quite a lot of customizable weapons and pieces of gear save it from mediocrity.  It's one I would love to see get a remake with some extra content and quality of life improvements, but as Capcom only seems to care about Monster Hunter, Street Fighter and Resident Evil these days, it seems increasingly unlikely to happen with each passing day.  Still, if you can find a copy, Mega Man Legends is worth a look as a flawed, but charming and quirky new spin for a fan-favorite franchise. 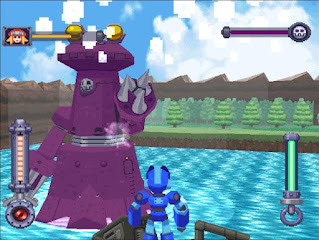 Developer: Capcom
Publisher: Capcom
Platform: Playstation 1, Nintendo 64, PC, Playstation Portable
Released: 1998, 2001, 2005, 2015
Recommended Version: The Nintendo 64 port (released as "Mega Man 64" per the platform's naming trend) offers surprisingly little improvement over the original PS1 version; while it does look a bit sharper owing to having antialiasing and less polygon clipping, it suffers from a worse draw distance, choppier framerate and significantly lower audio quality, though it does surprisingly retain all of the voiceover from the PS1 release.  The analog stick isn't utilized well either; you still move and turn "tank control" style with it, which is pretty awkward.  There is also a PC version which runs a bit smoother, though it has some problems of its own - it's a straight port of the PS1 game, even retaining the same (redundant) messages about needing memory cards to save.  It also lacks any of the lighting effects of the original and the music doesn't loop properly (it's just stored as low-quality .wav files on the disc).  Grab the PS1 version if you can; it's available both physically and as a digital download on the PS3/Vita store.  The PSP version is also worth a look (and bundled with 2 on the same UMD), though it's only available in Japanese.