Long-time gamers remember Camelot as a developer of RPGs for the Sega Genesis, but in later years they mostly branched out into making arcade-style sports games for Nintendo.  Advance Tour was an especially prominent case, utilizing some elements of their acclaimed Golden Sun games but having the core gameplay of a golf title.  But does this prove to be a solid combination of two genres, or does Advance Tour simply fall apart in execution? 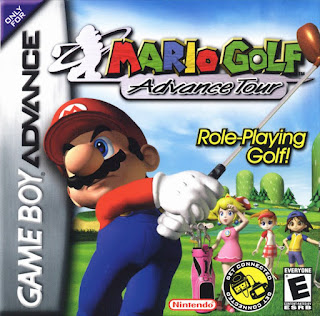 Camelot's journey as a game developer is a relatively odd one; starting out under the name "Sega CD4" and later changing to "Sonic! Software Planning", they were responsible for developing some of the platform's premier RPGs; notably Shining in the Darkness and Shining Force.  In the late '90s they began to work for Nintendo instead, changing their name to "Camelot Software Planning", becoming a second-party developer for Nintendo and mostly developing Mario-branded sports games since.  However, in between all that they also found the time to develop Golden Sun, a game which got a fair bit of attention for being one of the first Game Boy Advance RPGs, and have worked a handful of RPG elements into their sports games to boot, so their roots are still evident even today.

Mario Golf: Advance Tour is definitely a prominent example of this, as the game actually runs on the same engine as Golden Sun.  The same sound effects, HUD elements (including the animated icons for dialog choices) and overall visual style remain intact, and the game even makes prominent use of the GBA's sprite-scaling abilities to give it a nice 3D effect as you play.  The overall map design feels very RPG-esque too, with an overworld to traverse (taking you to the various courses and challenges) and even allowing you to search objects to discover items, which can boost one of your two characters' stats or even give them a free level immediately.

Of course, there is a more practical reason to explore the world map too.  You can practice courses either solo or with your AI-controlled partner to try and get your technique down, which earns you experience upon completing the run.  There are a number of optional goals to complete too, usually in the form of minigames centered on driving/putting practice where you must get 7 of 10 shots into a specified zone.  Completing some tasks also allows you to earn tickets, which can be traded in at the pro shop for custom clubs that will bolster one stat at the expense of another - handy thing to have if you're lacking in a particular area and can spare a point in another.

In terms of central mechanics, Advance Tour's have changed very little from those established in the earliest Mario Golf game  (NES Open Tournament Golf), which is certainly no bad thing - it's always been a simple but effective way to play virtual golf.  Basically, each swing entails three button presses at minimum - one to start the power gauge, another to determine one's power, and a third press to hit the ball precisely once it reaches the base of the gauge; being off slightly will cause your ball to slice or hook and not fly as far.  The last step is definitely the trickiest, but one can also press A during the second step to make it an automatic process; however, this does create a fair bit of random variance in your swing, so it's definitely worth practicing your timing to get more consistent results (all but necessary for the later tournaments, as well as many challenges).

In addition to this, you're given several other options to further refine your shots.  The L and R buttons will allow you to see exactly where your ball will land when hit with a precise amount of power, even placing a marker on the gauge so you know exactly where to press to get your desired distance.  Holding B will enter "impact marker" mode, letting you pick the exact spot you hit the ball, which can be useful for getting around trees and other obstacles.  Tapping B once before a shot will give you a "power shot" with further range; however, you only get so many of these per round (though you can earn more through the slot machine minigame). Finally, the buttons you press during a manual swing will allow you to add topspin or backspin to the ball, letting it roll further or stop faster respectively.  Tapping A twice gives topspin, B twice gives backspin, AB is "super topspin" and BA is super backspin.

The primary focus of the game's story mode is powering up your characters so that they can defeat their rivals and eventually have a match against Mario himself.  Your partner in doubles matches, as mentioned, is AI controlled by default, though a second player can also control them either via a link cable or by hotseat.  Thankfully, the game is more than playable solo too - the AI is actually pretty good for the most part, though they use auto-shots almost constantly when driving, which can be a bit of a problem on tougher courses.  They are surprisingly good at putting, though, which I certainly found helpful.  Like many Nintendo games of the time, it can also be connected to its console counterpart (Mario Golf: Toadstool Tour for the Gamecube) to unlock new features in both games, as well as to gain experience points for your GBA characters by playing modes on the Gamecube game.

Mario Golf: Advance Tour is an admittedly strange fusion of an arcade golf game with some light RPG elements, but it makes for a surprisingly compelling and fun experience.  Your stats do factor into the gameplay to a significant degree, but like any good sports game, the true test in your own abilities, gradually refining your skills and using them to overcome challenges on your way to the end.  Learning how to place your shots, make tactical changes to account for things like wind and weather and overcome minor mistakes to secure the top score is still the draw here, and the polished mechanics and presentation make it a lot of fun to experience.  It may also be a controversial call to some, but I find this to be the definitive Camelot GBA RPG. Golden Sun really didn't do a lot for me as its gameplay mostly consisted of repetitious puzzles and monotonous combat with some very contrived writing at times (literally repeating the exact same dialog, word-for-word, four times in a row at one point).  Mario Golf Advance Tour, on the other hand, is just pure fun and well worth picking up. 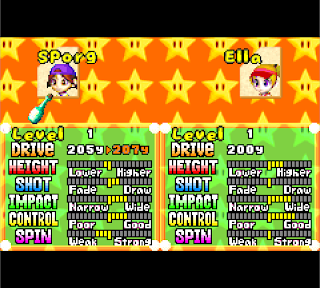