A sequel to the acclaimed and very successful Divinity: Original Sin, which promised to up the stakes and polish up many of the shortcomings of the original game.  But does Original Sin 2 follow up on these promises, or does it simply prove to be another underwhelming Divinity game? 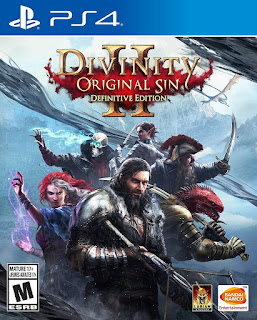 Divinity is a franchise that's been around for some time, though to be honest, I never really cared much about it; all of its games just seemed to be average-to-crappy knockoffs of other popular RPGs, and given the middling reviews most of them have gotten, I'm probably not too far off in that assessment.  Divinity: Original Sin was the big breakout title for the series, but it didn't really hook me either - while it had some interesting and relatively unique gameplay features, but it also featured a sluggish and clunky UI that was no fun to use at all, dragging pacing, really painful writing and acting and far too frequent and slow combat, all of which contributed to taking me out of it pretty quickly.

So, as you can imagine, it took me a good while before I worked up the gumption to play its followup.  Released three years after the original, Original Sin II once again saw a highly successful crowdfunding campaign that raised over $2 million, and the developers seemed intent to take fan criticisms of the original into account to make a much more refined and entertaining game this time around.  They certainly succeeded in that regard, and it's evident right away - the game's engine and UI are much more crisp and responsive, the overall pace of combat and exploration is greatly tightened up, and the writing is much better, discarding the original game's distracting stiffness and having a far more natural tone to its prose and acting.  The dumb "two characters arguing with each other to boost stats" and rock-paper-scissors argument mechanics are completely discarded in favor of dialogs having a more Baldur's Gate-esque list of choices, with more options unlocking depending upon your character's race, profession, background traits and skills.  In addition, you have a choice of several pre-fabricated characters with unique character traits and backgrounds that add more story threads and dialog choices, or you can create your own character, which lacks these unique elements but grants you a greater degree of fine-tuned customization - a nice balance between classic CRPG character building and having a more narrative-driven experience as many more modern games are wont to do.  Custom characters also aren't totally left out in the cold, as they get a unique combat action (Dome of Protection) not available to prefabs.

There are certainly no shortage of options to pick from when building your character, prefab or custom.  There are four races to choose from (Human, Elf, Dwarf and Lizard), as well as undead variants of all four who are healed by poison but take damage from normal healing spells and potions.  As mentioned, each race has slightly different starting skills and bonuses (whether resistance to elements or bonuses to skills), as well as a single ability unique to their race.  Elves get the most interesting one of these from a storytelling perspective, gaining the ability to eat body parts of slain characters (enemy or otherwise) to view their memories and get information others cannot access.  Another nice thing is that other characters you recruit during the game are also not fixed - once recruited, you can tweak their starting skills via dialog options, tweaking their starting skills more toward a particular play style so you don't end up with a redundant party member.

There is quite a lot to tweak for your character's stats, broken up into four major categories.  Attributes are your basic stats, determining what your characters can equip, what abilities they can use and granting bonuses when wielding certain weapon types.  Combat Abilities govern bonuses with different types of weapons, though there is notably no individual skill for swords, maces, bows, et cetera - instead, they fall under the umbrellas of one-handed, two-handed, ranged or dual-wielded weapons (and yes, you can stack one-handed and dual-wield bonuses if you go that route).  Defensive abilities also exist, and will grant passive bonuses; Leadership grants a small boost to all allies' stats when that characters is within five meters of them, Perseverance will restore some Armor after being hit with certain status effects, and Retribution will reflect a small amount of damage back to your attacker, with the effect going up each level.  Skills govern your various spells and abilities, from elemental magic to necromancy to polymorphing to "Scoundrel" skills like backstabbing or knocking enemies out for a turn with chloroform.  Finally, there are Talents - these act somewhat like Perks from the Fallout games, granting you unique abilities that and unlock options you wouldn't see otherwise and can significantly change the way you play through the game.  A few of these include Comeback Kid (reviving once per fight with 20% health if you die), Executioner (getting some extra action points if you kill an enemy once per turn), Far Out Boy (getting more range with all of your spells), Lone Wolf (giving yourself a major stat boost if you're going it alone, which makes solo runs through the game significantly more viable), and my personal favorite, Pet Pal, which enables you to  talk to animals, unlocking a wide variety of amusing dialog snippets and even a questline or two.  There's a lot to experiment with, and the non-penalizing nature of the game's design ensures that it's pretty hard to stick yourself with a master-of-none and make the later stages of the game unnecessarily difficult.  Every major quest also has numerous different ways to complete it, allowing you some roleplaying opportunities and alternative ways to get the job done even if you do something like, say, accidentally sell/misplace a necessary item.

The much-touted combat of the first Original Sin returns here, and like the rest of the game, it keeps everything that worked while casting out everything that didn't.  First and most notable is the fact that combat is used much more sparingly this time, making every fight feel like an event and not just like filler included solely to waste your time and hit some dumb publisher-mandated length quota.  You have very granular control over your movement and aiming - if you can't hit an enemy's body with a thrown dagger or a spell, you might be able to barely target one of their limbs or the tip of their snout instead and still get that hit in.  Controlling the field itself plays a major part too - nearly every fight has you tossing around oil, poison, fire, ice and water in various combinations, trying to get your enemies in the thick of it and minimizing the effects on your own characters.   Oil and poison are also flammable, so you can easily dip your enemy in one, then set them ablaze to deal even more damage (though they can also do the same to you, of course).  Fire can also be extinguished, creating steam clouds that obscure vision and effectively block ranged attacks.  Setting up traps then teleporting enemies into them, dropping environmental objects like barrels or heavy chests on enemies for heavy damage, climbing up on ledges to get bonus damage with ranged shots.  The possibilities really do feel endless, and the fact that the game rewards creativity (and has a well-designed enough engine to grant you the ability to think laterally like this) really makes it a joy to experiment with.  That certainly doesn't end once the fight is over, either, as you can use nearly all of your spells out of battles too, letting you find hidden secrets, move traps aside and reach areas you can't simply stumble into.

To put it simply, Divinity: Original Sin II is a triumph, succeeding not just where it's predecessors fell short, but where virtually every western RPG of the last twenty years has too.  Like many western RPGs it's clearly built on the model of tabletop games like Dungeons and Dragons, but it's closest I've ever seen to offering the same degree of freedom and flexibility as one of those.  There are no readily evident prefab solutions to any problem you face, and you're given enough freedom to to think outside the box when exploring and improvise tactics on the fly in combat, making it extremely rewarding to play.  The sheer amount of options you're given to customize your characters and interact with the world at large are nothing short of staggering, giving it tons of replay value on top.  Your actions over the course of the story significantly change the way events play out, your character, prefab or custom, still feels like they're an actual living part of the world you're in, and the game manages to have a surprisingly good sense of humor about itself without ever undermining the gravity of its story (or going too far in the other direction and coming off as stiff and pretentious).  Hell, if you want to take it a step further, you can also play online with friends, and one of them can even play as the "Game Master", subtly tweaking things behind the scenes to make the game as easy or difficult as they want it to be.  I fully admit I was skeptical, but after having played it, I say without hesitation that it's easily the best CRPG I've played since their golden age in the '90s and early 2000's, having enough depth to rival those with enough solid storytelling beats and puzzles to keep me invested, even if there are some irritating roadblocks at times.  Highly recommended. 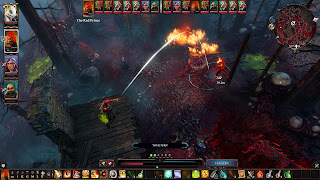 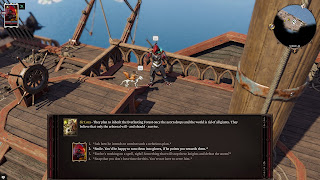 Developer: Larian Studios
Publisher: Larian Studios, Bandai Namco Entertainment
Platform: PC, Playstation 4, Xbox One, macOS, Switch, iPad
Released: 2017, 2018, 2019, 2021
Recommended version: As ever, I recommend the PC version if you have the specs for it; not only does it flow perfectly with a mouse-and-keyboard setup, but it supports modding via Steam Workshop, letting you tweak the game to your tastes and add even more fun and longevity to an already incredibly deep experience.
Labels: ⭐⭐⭐½, 👑, 2017, Full Reviews
Newer Post Older Post Home