A deck-building roguelike game that, while not the first of its kind, inspired a slew of similar games over the following years.  But is Slay the Spire still one worth playing, or is it outshined by others that followed in its mold? 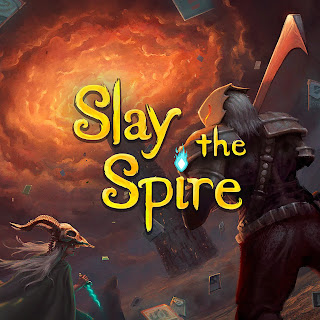 Slay the Spire is an indie game that spent a good while in development, first appearing as an Early Access title on Steam in 2017 but eventually being released across a number of platforms from 2019 to the present.  Its premise was a simple one - pick a character, build a deck and tweak your stats from a random assortment of cards and relics you find along the way, defeat enemies and bosses, and eventually, slay the spire after several successful playthroughs.

Of course, getting even one successful victory is an ordeal in itself.  Each character starts with a very basic deck; usually just one or two cards themed to their specific archetype, with the rest being generic "Strike" and "Block" cards.  As you work your way through groups of enemies, random events and shops, you'll be given numerous opportunities to find new cards, upgrade, discard or change your existing ones, and over time, gradually shape your deck to deal with progressively more dangerous threats.   Each of the four characters goes about this slightly differently, with the Ironclad mostly focusing on his durability and strong attack cards to get by, the Silent using a variety of status effects and barrages of shivs, the Defect milling magical orbs and the Watcher relying largely on deck-manipulation.

Battle is of course a big part of this, with the player having to manage a resource called Energy to play most cards.  Each turn begins with five cards drawn and three energy to spend, and as long as they have cards to play and energy to spend, they can do as many as possible within a single turn.  One can also see in advance what each of their enemies will do (attacking, casting status effects, blocking, et cetera), which allow them to adjust their strategies accordingly.  For example, if most enemies are defending or casting a status, that's an opportune time to attack, while if they're defending, they may wish to play cards that build up Block instead (which lasts until their next turn and cancels out damage taken).  All of the cards in one's hand are also discarded at the end of each turn, so making the most of each hand you're dealt is essential.

Of course, as with any good collectible card game, bending the rules in place with your deck is a major element of the gameplay.  Some cards get added effects that let you get more mileage from them, like Retain (cards with this effect are not discarded at the end of a turn); Exhaust (that card is removed from your deck for the rest of the battle after use), Innate (that card will always be one of the first you draw), and Ethereal (that card is removed from your deck at the end of your turn, whether you use it or not).  Others allow you to draw more cards, reduce the cost of other cards, boost damage of other cards, add more energy, recover some hit points, and Block and deal damage at the same time, or add a variety of buffs to yourself and debuffs to enemies.  Fragile will cause anyone affected by it to take extra damage, for example, Weak will reduce the damage they dole out, and Poison will inflict defense-ignoring damage at the end of the turn, counting down by 1 for each turn it's in effect.  Positive effects include Energized (beginning a turn with more Energy), Metallicize (which adds some Block at the end of your turn), Strength (adding to damage inflicted) and Artifact (which blocks one negative effect).

Over the course of the game, one will also undergo a number of events that can change up their stats.  These primarily come in the form of Relics, which grant a number of effects that are mostly beneficial, but can also prove a detriment to some builds.  While a few of these are relatively mundane (just boosting max HP or having your first attack deal extra damage), others will drastically change up the way you play.  One example is the Unceasing Top, which will cause you to draw an extra card each time your hand is depleted; a very useful thing to have for builds that rely heavily on 0-cost cards like Shivs or Claws.  Some that can be a double-edged sword include Ectoplasm, which boosts your maximum energy but makes it so that you cannot earn any gold for the rest of the run.  The Calling Bell is another example, giving you three other random relics but also sticking an unplayable Curse card in your deck that cannot be removed; not too big a deal for most builds, but if you're planning on using the effect of the Unceasing Top to keep drawing cards... it can definitely be a detriment.

Other events may give you "colorless cards", which are cards usable by any character and generally have effects more powerful than mundane cards, or potions.  Potions can be used at any time during your turn and also have a wide variety of effects, from adding a buff to dealing damage to letting you draw cards.  However, you can only carry three of them at a time (five with a certain Relic), so using them sparingly and knowing when to trade a lesser potion for a better one are both important.

Like any good roguelike, Slay the Spire pulls no punches with its difficulty; getting through the game is punishingly tough and monsters will beat you down time after time, yet it's rewarding enough to keep you coming back for more.  Playing rounds of the game, whether you successfully get to the end or not, will gradually unlock new cards and relics for your characters to use, and learning to adapt to whatever the game throws at you is a gradual but enjoyable process.  But even after you've unlocked all the characters and cards and successfully slain the spire, each day brings new Daily Challenges, putting the player into a preset scenario and random seed and challenging them to get the highest score on a worldwide leaderboard.

Slay the Spire may not have been the first deck-building roguelike ever, but it's easy to see why it became such an influential one.  The roguelike hook of being a relatively short game (about 40 minutes per run), but having high challenge is there in spades, and tweaking and upgrading your character and deck quickly proves to be an addicting experience.  One Step from Eden and Hades expertly mixed action into the format, but it's nice to have a roguelike that's just built on strategy, execution and improvisation once in a while, too, which Slay the Spire does expertly. 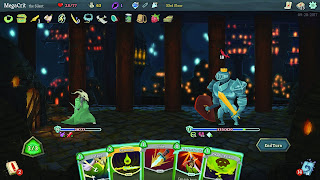 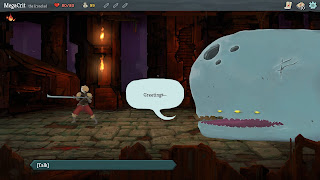 Developer: MegaCrit
Publisher: Humble Bundle
Platform: Windows, macOS, Linux, Playstation 4, Switch, Xbox One, iOS, Android
Released: 2019, 2020, 2021
Recommended Version:  Having played the Android and Xbox One versions, I see little functional difference between them save for the slightly clumsier controls on the Android port that require dragging cards onto a target to activate them.  The Steam version seems to be the one to play, though, as it supports player modding for extra replayability (including the excellent fan mod "Downfall", which lets you turn the tables and play as the boss monsters defending the spire from would-be slayers!).