A mostly forgotten Famicom-exclusive RPG released by Konami in 1991, which had some relatively unique elements and, per company standards, a fantastic presentation.  But is this overlooked game one that retro RPG enthusiasts should play, or should it simply be left alongside the dozens of forgettable Dragon Quest clones on the platform? 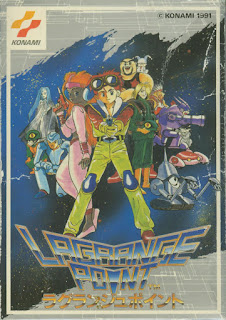 Lagrange Point was a pretty overlooked RPG in its time (and still is today), but a lot of that can come down to its Japan-exclusive release and for coming out in 1991, at a time when the 16-bit consoles were rising to prominence and the Famicom and Master System were starting to be phased out.  Still, it's a Konami game, and as they were known for making some extremely high quality games on the system, it attained enough of a following to get an English translation in 2014 by Aeon Genesis.

It took me a while to dive into this one proper, but I can say that Lagrange Point is definitely worth the small but dedicated following it has and then some.  Right from the word "Go", the game sets out to impress with its amazingly detailed visuals and a stunning soundtrack.  One of only two games to use the VRC7 memory management chip, Konami definitely put it to use here, creating a soundtrack rich with space ambience and nearly on quality with 16-bit SNES or Genesis titles in quality - it really is that good, and well worth a listen even if you have no interest in the game itself.

The setting and design are also relatively unique, especially by Famicom standards.  While most RPG-producing companies on the platform were just content to make a forgettable Wizardry or Dragon Quest clone and call it a day, Lagrange Point definitely does not take that route.  Instead, the game is set in the far-off future of the 22nd century, when mankind has colonized space and set up colonies at the lagrange points.  Rather than generic hostile RPG "monsters", you're also fighting something a bit more sinister - a human faction known as the Bio Corps, who have launched a campaign to overtake the colonies for themselves.  You begin as a group of soldiers who are sent to the colonies to assess the situation, but you end up being shot down and are one of the few survivors; so you must band together with the resistance factions aboard the satellite and take the fight to them.  Fittingly, your weapons are mostly futuristic in design (from acid guns to laser knives) and you traverse the world map with an escalating variety of vehicles right from the start and never have to go on foot.

The playable cast is actually a fairly diverse one, too, with five human characters, three cyborgs and two robots.  Humans have the unique weakness of having their mental states deteriorate during battle in varying ways, which can cause them to inflict less damage (Nervous) or even outright panic and become uncontrollable; some skills and items can reverse these effects, and even put them in a more positive state of mind (Hype) where they deal more damage than they normally would.  Robots, naturally, don't gain either the positive or negative effects from mental states and are generally more durable, but require specialized healing items to recover from damage taken.  Each also gets a unique skill set and Super move, so it's worth trying them all out as you get them to see which ones you like the best.  As with most RPGs of the time, though, some characters are much better than others, so you're often better off just finding a core team you like and focusing on leveling them up while leaving the rest behind at your base.

Core combat mechanics are pretty much in the same league as games like Dragon Quest - turn-based fare where you target enemies, defend against attacks, use techs to heal up or bolster your status when needed, et cetera, though a few twists are added.  The aforementioned Super attacks are one - each character gets one of these, and their effects vary quite a bit, inflicting differing elemental damage to a single target or all enemies, at the cost of some of their HP.  This can be worthwhile in some situations for characters who have a lot of HP to spare, but for the most part these are of questionable value; generally you only do slightly more damage than a normal attack at a cost of a big chunk of your health, which usually isn't a good tradeoff.  Techniques are not learned by gaining levels, but rather found in chests along the way, and only certain characters can use certain techniques (though you generally won't know who can use what in advance).  Each of the enemies in a battle also has a life gauge visible at the top of the screen at all times, which gives you a good gauge of how much damage you're doing to them and whom you should target next.

The other pervading mechanic is BP, which you'd think would function like MP in most RPGs - casting supportive and offensive spells.  You'd be right in that regard, but normal attacks consume it as well, with more powerful weapons generally eating it up more quickly.  Once it runs out, your attacks will be massively nerfed and you'll be unable to use any techniques until you refill it, either at an inn or by using items to recharge a portion of your meter.  Unlike most RPGs, it also does not increase with your character's level - instead, you buy batteries at the shop with higher capacities to carry you through.  Even that may not be enough if you have a particularly powerful weapon that quickly eats battery power, though, so finding a good balance between raw damage and power consumption is key.  One must also factor in the elements of specific weapons for specific areas - some enemies may be highly resistant to one type of attack but weak to another, so changing up your equipment accordingly (and having a good combination of types) will go a lot further than raw power.

Another fairly unique element to this game is that you don't simply buy new weapons at shops and be done with it.  That's fine for the early stages, but in order to unlock the best weapons you must utilize the game's weapon combination mechanic - combining two weapons of similar type to produce a higher tier one with greater power, with numerous recipes being revealed through dialog and books found throughout the game.  A relatively novel idea at the time, and one that later games like Robotrek and Dark Cloud 2 would attempt to replicate with varying degrees of success.  There is a catch, though, in that you can't simply fuse the strongest weapons in the game even if you know how - higher tiers of weapons have higher stat requirements to equip, and characters will typically require quite a few levels under their belt before they hit that threshold.

Lagrange Point does fall prey to a few common RPG shortcomings of the time, though.  The encounter rate in the game can be irritatingly frequent, though thankfully combat is fast-paced so it doesn't drag things down too badly.  The difficulty is also uneven - you can easily go from an area where you dominate everything to one where enemies will deal far greater damage and quickly wear you down.  One particularly annoying example of this is actually very early in the game - a tunnel that is only a few screens long, yet is one of the most treacherous areas in the game.  Enemies there have techniques that will cut your HP and BP reserves in half and completely ignore your armor and defenses.  Even moreso if you saved on the opposite side of the bridge and have no access to a shop or items that will replenish them, forcing you to just brute-force rush your way through.  Objectives are also occasionally unclear, though you do get maps of the various areas you'll explore early on, which can at least give you a good idea of areas you should check in order to advance; another nice touch is that, unlike in most JRPGs, the world "wrapping" at the top and bottom of the map actually makes sense since you're on a cylindrical space station rather than (ostensibly) a round planet.  You'll also have to stop and grind more than a few times to have enough money for essential upgrades, though I never found it to take so long that it became a detriment to the experience; just as long as you don't die (which robs you of all the money you would have received at a save point when checking in), you'll make plenty of cash on each excusion.

So, Lagrange Point may be recognizable as a JRPG, but it certainly was a pretty novel one for the time.  Not only did it look and sound a cut above virtually every other example of the genre on the Famicom, but it had a relatively unique science fiction setting, worked in some unique mechanics and required quite a bit more careful inventory and character management than many others on the platform.  It may not be a standout classic of the genre, but it's an interesting and fun little title that's well worth a look; certainly much moreso than a lot of the mediocre Dragon Quest and Wizardry clones the Famicom had. 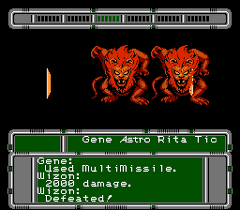 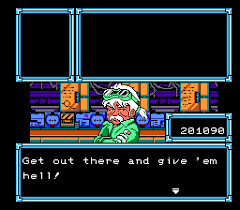