The first entry (and as of 2021, one of only two) in the Metal Max series to reach western shores, Metal Saga is an open-world, turn-based post apocalyptic RPG with a focus on customizable vehicles; sort of like Mad Max by way of SaGa.  But does Metal Saga's unique take on the wasteland make for a compelling adventure, or is this one Saga you should simply skip over? 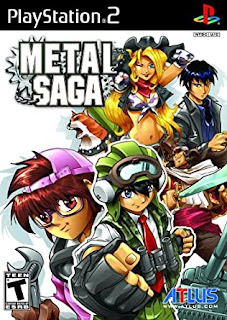 Metal Max isn't a particularly well-known name in the west, but in Japan it's another story; it currently has fifteen entries, starting in 1991 on the Famicom and getting a fairly steady stream of sequels, ports, remakes and a subseries or two across numerous platforms, with two more currently in development as of this writing.  It's even outlived the company that created it (Crea-Tech) and continues to get new entries under Cattle Call - a company mostly comprised of former Data East employees (who also co-developed some of the early games).  Atlus, still a relatively niche publisher in 2006, took a chance and brought the series to the west for the first time with its fifth canon entry, Metal Saga.

Metal Saga is not a typical JRPG in most respects, that said.  The game seemingly draws a lot of inspiration from western RPGs, putting heavy focus on its setting rather than a running narrative within it.  The game gives you a massive open world to explore and interact with, uncovering bits of lore and interacting with various characters, but there isn't really an overarching storyline to the proceedings.  Metal Saga doesn't even really have a predefined goal - there are a number of dialog choices or events that can end the game right then and there (including one in the very first dialog sequence), and it's ultimately up to the player to set their own goals and carry them out rather than do what they're told.  Incidentally, nearly all quests you find are fairly standalone, whether it's following a bounty mark to a complex of abandoned buildings or thwarting a train robbery, they're rarely mentioned outside of that context and usually not acknowledged again after you complete them.  The setting is also a fairly unique one for this type of game - rather than taking place after a nuclear apocalypse, Metal Saga takes place on a world where mutants and machines have run amok; hence, while there are a lot of decaying buildings and stretches of desert, there are a lot of relatively pristine green landscapes and a surprising amount of still-functional (and well-maintained) machinery, both man-operated and independent.  There are also very few fantastical elements in Metal Saga - characters' special attacks are mostly in the form of one-use items or, in the case of the protagonist's signature satellite beam move, cost money to activate.

The game has been compared to Fallout in regards to its nonlinear design and a constant off-beat sense of humor, but one thing that definitely sets it apart from that franchise (and most RPGs for that matter) is its focus on vehicles.  You get your first one relatively early on - a humble dune buggy with a low-caliber machine gun - but as the game moves on you can find or purchase more.  Mostly in the form of progressively larger tanks, but with a few oddities like a double-decker bus or a firetruck (which are no less equippable with heavy artillery).  There is quite a bit of depth to the vehicles, too - balancing out the weight of the chassis, the power of the engine, accessories, weapons and ablative armor, as well as computer systems for larger, more complex vehicles that would otherwise require several characters to operate.  All of these parts also take damage individually in battle, which can require you to adapt your strategies carefully until you get back to town and can get them repaired.  You can get a lot of mileage out of any one of your vehicles with upgrades (yes, even the lowly dune buggy), which is where a large percentage of the money you make in the game will ultimately go, especially if you're looking to complete the larger bounty missions.  One can also rent vehicles temporarily for big battles, though they get charged a fee if they come back damaged (which they often will). And of course, a lot of dungeons (particularly buildings) can't accommodate vehicles, so you'll want to have your characters well-equipped for when they have to leave them behind and venture in on foot.

The open-worldness does have some natural drawbacks, though.  It is relatively easy to wander into an area where enemies are far above your current level, which can bring your run to a swift end and erase a good chunk of your progress.  While clever players can also use this to their advantage, going to a high-leveled area early with a pocketful of cash and getting ahold of some powerful vehicles or gear well beyond what they should currently have, most of us (first-timers especially) should probably save before they venture out too far from a familiar area, and be prepared to wait a while to follow up on some quest leads if they're too difficult to handle at the present time.

Metal Saga isn't all just quests, though.  There are a number of things included just for fun or to earn a bit of cash without having to fight monsters.  Collecting medals (a Dragon Quest staple) appears here, letting you earn some extra cash and prizes by trading or selling them.  Purchasing items from vending machines can occasionally give you bonus items if you get lucky, and a number of minigames are playable, like a Space Invaders style arcade game or a beer chugging contest, or more traditional ones like playing blackjack or slots.  A few other innovative features shine through, too - your character's portable computer can allow you to download minigames to it and play them at any time, or even download songs from jukeboxes and play them back later - handy during longer dungeons where the looping background tunes tend to get annoying.

If Metal Saga has a major weakness, it's probably its presentation.  While nothing overly bad, the game is somewhat drab visually compared to other well known RPGs on the platform, with a lot of samey looking brown/gray cities, buildings and caves and not much in the way of flashy combat animations.  A lot of the music is pretty repetitive too, particularly the droning combat songs, though it does get some nice atmospheric tracks on the overworld and cities, and the series' iconic theme returns to accompany bigger battles.  It's a bit like Square's SaGa series in that regard, focusing on content and setting over flair.

In short, Metal Saga is a game that, while it has some JRPG trappings, is much more akin to a western computer RPG in design, giving the player near-total freedom to explore, customize their party and vehicles and choose their own goals to complete as they make their way around the world.  Its overall setting feels like a mashup of Trigun, Terminator and Mad Max, though the heavy moods of its inspirations are greatly offset by its quirky sense of humor.  It's a niche game for sure, but those who are happy exploring a large, dense setting and love to tweak and experiment to the exception of everything else will find a lot to like in Metal Saga. 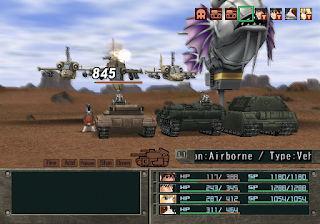 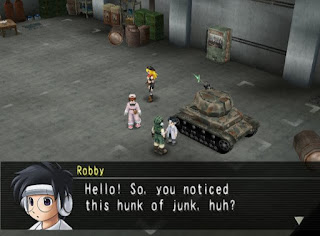