An open-source roguelike and simulation game forked from an earlier release called "Cataclysm", Dark Days Ahead, like many in the genre, is a deep but ruthlessly punishing experience. But is there a lot to like once you get past its overly complex UI and opaque design, or is this one Cataclysm you don't want to experience? 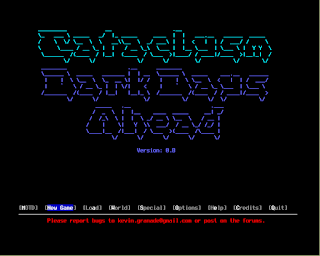 Cataclysm: Dark Days Ahead is one that's gotten a fair bit of attention among PC indie gamers; not as much as something like, say, Dwarf Fortress, though it is compared to that at times owing to its relatively realistic design and detailed world generation.  It actually started out much smaller in scale as a zombie apocalypse rougelike simply titled "Cataclysm", though it was abandoned around 2010.  However, the source code was released and fans continued the game, expanding its scale and scope considerably and rebranding it "Cataclysm: Dark Days Ahead".  It continues to get fan mods and updates to this day as well, with new nightly builds, so its fanbase is certainly dedicated.

The concept remains the same at its core as the earliest version of Cataclysm, being set in a near-future New England after an apocalypse.  You don't encounter just zombies, though - just about everything that can go wrong has in this world.  Triffids, Lovecraftian monsters, rampaging robots, cyborgs and mutants, giant insects and other hazards roam rampant.  And yes, there is also a mod that adds murderous animatronics to the game, not dissimilar to another popular indie series.

The game begins with the player generating a world to explore.  The world actually remains persistent across games, keeping one's settings for weather, seasons, and even keeping track of major changes made to the scenery; burnt down trees and destroyed buildings will stay as such.  In fact, they will continue to persist across numerous playthroughs, only resetting once every non-monster character in the world is dead.  A few things remain fairly consistent, though - large stretches of country roads and woods, cities that tend to be packed to the brim with undead, illegal bio-labs where mutations and bionics are found, and bunkers full of survivors or crazed cyborgs or paramilitary groups which tend to shoot you dead upon approach (but if you're good enough to raid them and survive, well, you're set for a good, long time).

Character generation is very in-depth as well; though there are only four base stats you can alter directly (Strength, Dexterity, Intelligence and Perception), they all factor into various skills and tasks in a number of ways.  Strength of course gives you more melee damage, but also makes you more resistant to diseases and poison and grants greater carry weight and more hit points.  Desterity factors into hitting with attacks both at range and afar, Intelligence boosts your learning and reading rates and how well you can craft items, install bionics and interact with NPCs, and Perception is used to detect traps and useful items.  In addition, you can pick a number of traits that grant your character positive and negative effects, with the former subtracting from your pool of available points and the latter giving you more points to spend.  These include things like Addiction Resistant (making it harder to become addicted to drugs, and to shake off addictions), Bookworm (improving your morale more when reading) and Light Step (reducing your chance to trigger traps).  Negative effects include Animal Discord (animals generally either avoid or attack you), Flimsy (lowering your max HP and healing rate) and Insomniac (makes falling asleep much more difficult).  This gives you quite a lot of leeway for roleplaying, but those who are into min-maxing can just pick positive ones that will maximize beneficial effects and a bunch of minimally-hindering negative ones to effectively get some free points.

Finally, there are skills, which cover just about everything you can do in the game.  From bartering to using computers to building to driving to patching up injuries to swimming to fighting (whether with guns, melee weapons or barehanded).  You can tweak these to a degree at the start, but for the most part, you'll improve by practicing with them in-game.  Wielding weapons, making attempts at crafting stuff, reading books, driving around, et cetera will slowly improve your proficiency with it, and, if you have the Skill Rust option enabled, not using them for a period of time will cause them to slowly decay again.  One can also choose to disable progression on a skill willingly - more useful than it sounds, as after a certain point there ceases to be any noticeable difference in performance, and continuing to actively train it at that point will simply drain your Focus more quickly.

Unlike most roguelikes, however, there isn't a defined goal in Cataclysm DDA; instead, the focus is on day-to-day survival.  Finding food, water and shelter are your primary concerns, and avoiding combat whenever possible is usually a better option to fighting; moreso early on, when you have a relatively weak character and most enemies can easily overpower you.  Just staying alive a single day is often a monumental task as well - one wrong step can put you in the thick of a group of zombies or aggro an angry cyborg or get you attacked by psychotic militants, and well, that's usually it.  On the other hand, if you pick your battles, try to make friends by completing quests or trading items with them and get reasonably good with crafting and butchery to make the most of any materials you scavenge, you can slowly work your way up.  Keep in mind you're in it for the long haul, and things will usually go smoother.  As long as you don't get eaten by zombies or mauled by a stray cyborg on day one, of course.

Speaking of cyborgs, one can scavenge and install bionics with a variety of purposes - from built-in armor to surgical tools for more efficient butchering to built-in weaponry, or even odder ones like draining heat from enemies you strike in combat to deal extra damage and charge your batteries.  Fun stuff, but they do require access to an autodoc and come with a chance of installation failure, which can cause pain, injuries, malfunctions or even death.  Some start scenarios also have you begin with some bionics installed - both functioning and malfunctioning, which adds another degree of fun or frustration depending on your preferences.

Mutations come into play too, giving your player various passive traits if they come into contact with mutagens or consume mutated body parts.  These usually follow the traits of various animals - taking on fish characteristics naturally make you better at swimming, but also more averse to staying in a single place for long (and you smell worse).  Beast mutations make you stronger, faster and more resistant to harm, but animals become hostile to you and you're required to eat food (meat in particular) much more frequently.  Most mutations can be undone, but particularly severe ones may be permanent, forcing you to change up how you play from that point on.

Vehicles are another much-talked about element of Cataclysm DDA, and for good reason - they're a lot of fun.  From humble bicycles to semi-trucks to school buses and RVs, there are a lot of them to find, repair and use (and yes, you can hotwire them; you will have to more often than not).  In addition, one can modify them in a variety of ways, including installing multiple engines, modifying them to run on different types of fuel (gasoline, diesel, electric or even solar power), and even install robotics to control them remotely.  Hell, you can even make some vehicles aquatic by installing boat hulls on them and cross bodies of water.  It's about the only game I've ever seen where you can make something close to the vehicles from Mad Max: Fury Road, and that's just plain awesome.

There's a lot of really fun stuff to do in Cataclysm, but before you can get there, learning a few of the more mundane skills the game has to offer will pay off in spades.  Farming is a relatively inexpensive but effective way to keep your food supply steady for much of the year, crafting crude tools (like crowbars and slings) from raw materials will give you an easy way to reach areas you otherwise couldn't or let you carry much more capacity, and learning to bandage and disinfect wounds and treat various diseases you may encounter will greatly affect your long-term survivability.  Cooking too, as uncooked meat can potentially infect you with parasites and cause debilitating effects.  Managing morale is important as well - if you're down and depressed you won't be good at much of anything, so things like finding books to read, having a good meal once in a while, listening to music, or (in a pinch) popping some drugs will all help you there.  As with anything, you have to learn to walk before you can fly.

Cataclysm: Dark Days Ahead is compared to Dwarf Fortress in a lot of respects, and it makes sense - both feature minimalistic aesthetics, extremely intricate mechanics and overly opaque interfaces that all but require you to regularly consult their respective wikis, not to mention a high degree of challenge and ultimately being built around inevitable failure rather than an uphill battle for success.  Still, the sheer amount of content and freedom the player is afforded is downright staggering, and being able to build up a small band of survivors/fleet of vehicles/army of mutants and cyborgs is a ton of fun - if you can manage to survive long enough to get there.  You can also make it as easy or as punishing as you like via in-game options, so if you want, you can pump up your starting point pool to give yourself an advantage or take a really difficult start with a bunch of disadvantages and see if you can last more than an hour, let alone a day or more.  There are hundreds of games which describe themselves as "open world" or "sandbox" experiences, but very few of them let you experience true openness, variety and freedom the way Cataclysm: Dark Days Ahead does. 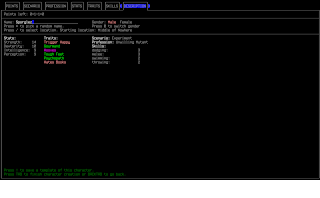 Developer: Kevin Granade (and the Cataclysm community)
Publisher: Kevin Granade
Platform: PC, OS X, Linux, Android
Released: 2013+
Recommended Version:  The official releases are all nearly identical as far as I can tell, though if you're going to play on a mobile device, I do recommend a USB or Bluetooth keyboard; the touch-screen controls are very unwieldy to use with this type of game.