The fourth Breath of Fire game and the second on the Playstation 1 was released at a time when the platform was being largely phased out in favor of its successor and thus it went largely ignored by critics and audiences.  But does Breath of Fire IV prove to be a worthy RPG despite its low-key release, or is this just a lackluster last hurrah for the series on the Playstation 1? 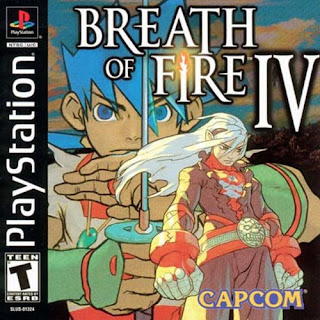 Breath of Fire III is probably the most successful and talked-about entry in Capcom's RPG franchise, but I personally didn't enjoy it all that much.  While it did have some great and interesting elements to it, the dragging story pace and arduous combat and minigames, paired with a general lack of balance in the gameplay, made it a game that felt more like a slog than a compelling RPG experience.  Because of that, it was a long time before I really gave Breath of Fire IV much of a chance, especially as it was said to borrow many of 3's design cues.
That much is true, at least; much of the design philosophy here is taken straight from 3, though thankfully given significantly more polish.  Learning skills from enemies returns here, though the luck element is drastically toned down and it doesn't require a separate command to "watch" them for a chance to learn it; using Defend gets the job done now.  The Master system returns too, letting the player shape characters' stats and learn new skills by apprenticing them to Masters throughout the world, but has also seen improvement - skills learned are no longer dependent on just levels, but have other conditions too, tying into mechanics like the combo system, having enough play time racked up on the clock, fighting enough battles or even having enough fishing points.  Basically, they reward you for playing the game, not just stopping everything to grind out more battles; that alone is a major improvement over 3.

The overall design of the game has been much refined too; evident right away in the presentation and cinematography.  Right from the word go, Breath of Fire IV opts for a more movie-like feel with dynamic camera angles and staging and a greater focus on characterization and worldbuilding while relying far less on corny humor.   The pacing is vastly improved, with dungeons feeling focused and loading being virtually unnoticeable, especially in combat.  Minigames are well-integrated into the narrative, and while still not amazing, are fun little diversions rather than irritating chores standing in your path.  Most mundane NPCs in the game have portraits in dialog, which is quite a nice touch, and the solid animation of 3 is even better here, with fluidly-animated sprites and a surprisingly good framerate in the thick of battle (though you can hit occasional slowdown while wandering towns and dungeons).  Even the movement is tighter now - you still move on a set graph and it uses the same isometric style, but I didn't find myself struggling to position myself in front of a switch or sign nearly as much.  Hell, you even have the option to offset D-pad presses to move in diagonal directions if you wish, which is very nice (though I didn't end up using this).  Even the fishing minigame has seen some upgrades, adding some free-roaming around the fishing spots to find the best places and even letting you reel fish in easier by timing button presses to the drums in the music.  Hell, if you happen to own a Playstation 1 fishing controller, it is fully supported by Breath of Fire IV, showing that they really did go the extra mile in every way they could.

Town and dungeon design is much tighter this time too, with small, focused maps instead of huge sprawling ones, and nearly all the dungeons being built around puzzles rather than static, empty corridors full of monsters.  They went slightly overboard with the "packed-in" feel, though, as the halls and corridors you traverse are very narrow and, paired with the isometric perspective, you'll have to frequently rotate the camera to see where you are and where you have to go.  They did attempt to offset this somewhat with Nina's action command, though - she floats up into the air and looks down on the area from above, which can help you get your bearings at times.

Of course, they do add some new twists onto the game too.  Combat has been overhauled substantially - not just in pacing, but mechanically too.  You get a party of six with a maximum of three active in combat at a time, but all of them are with you at a time - no exiting to the map to swap characters when the plot dictates.  One can even switch characters in and out of the active party mid-fight, with those on the sidelines slowly regenerating AP each turn, and while they're sitting out they're also burning turns of status effect duration; quite handy as you can imagine.  Switching characters to deal with particular foes is important too, as each character now has an elemental affinity - they're usually given spells of that element to cast, take less damage from it and more from an opposing element.  Characters don't ever really become obsolete, either; unlike 3, attack magic isn't rendered useless by poor scaling, and particularly powerful skills (like Ryu's dragon morphs) are toned down considerably here.

Another major factor in combat is the new combo system.  Essentially, what this does is let the player chain together skills and spells to not just deal more damage (growing higher as the combo count rises), but to create entirely new attacks.  Elemental spells, cast in proper order (Fire -> Wind -> Water -> Earth -> Fire) will create bigger and more powerful attacks, and some other, less conventional options exist, like combining a healing spell with a fire-element attack to create one heavily damaging to undead enemies.  Even status-inflicting abilities play into this; useless in most RPGs, here they score two hits - one dealing light damage and the other having a chance to inflict the effect.  The latter hit can also combo with other attacks, giving them another chance to inflict that status on top of their normal effect.  There are a ton of possibilities with this new element, which makes combat more engaging than in any prior BoF game - every time you get a new skill you'll find yourself experimenting with it, seeing what you can combo it together with and trying to work towards the damage and combo chain goals that some Masters require.  A big achilles heel of older RPGs is the stale, repetitious combat, but Breath of Fire finally crawled out of that hole with IV and made battles something I looked forward to rather than started to groan at.

Breath of Fire IV doesn't break a lot of new ground; in fact, in terms of overall design it's remarkably similar to 3.  However, it also stands as proof that polish can make all the difference between an arduous RPG experience and a solid game.  The cinematography, dungeon designs, pacing and writing are all a massive improvement on 3's, creating a compelling and epic adventure that plays great to boot.  The game looks gorgeous, with visuals that manage to hold their own against even the almighty Square even with the much smaller budget; beautifully realized and expressive character designs, smooth combat animations, and creative, sharply rendered environments and visual effects. The music, as in any good RPG, carries the mood perfectly, creating an experience that's often grim and depressing, but also very compelling.  Breath of Fire IV is easily the most impressive BoF on a technical level and in terms of storytelling, and is certainly worth a look for any serious fan of RPGs. 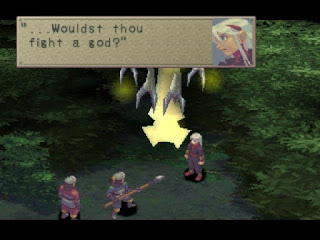 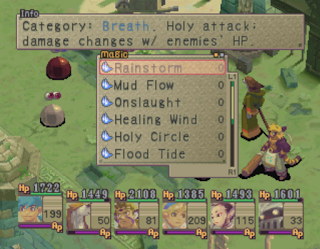