An indie game described by several players as a combination of Uncharted Waters and Final Fantasy Tactics, crafted by a one-man dev team.   But does it live up to the lofty heights that description bestows, or does it promise the world and deliver a crayola-drawn map? 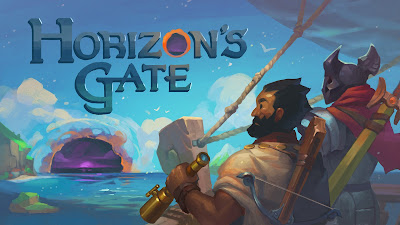 I didn't know about this one until recently, and even then it sounded too good to be true.  A game that combines elements of Final Fantasy Tactics and Koei's cult classic privateering sim Uncharted Waters into one game?  And it's all made by one guy?  Surely there was no way it could actually be good.  But, always on the hunt for good RPGs, I decided to grab it during the annual winter Steam sale and give it a go.

The game certainly makes its inspirations known from the very start, having a pixelated art style very much reminiscent of the 16-bit era of Final Fantasy games and some surprisingly epic music to match.  It also shows off the turn-based combat right away, letting you know that, unlike most indie turn-based strategy games, it's definitely not going to be an easy one - the AI relentlessly targets characters one-by-one until they're down and definitely isn't afraid to hit you with all manner of annoying status effects every step of the way.  Thankfully there doesn't seem to be such a thing as permadeath in this game and being KOed doesn't rob you of experience rewards afterward, but your maximum HP will temporarily be lowered each time you are (and will only be restored after venturing for several days).  It even has a few nice touches to its design that I also lauded in the otherwise bland Divinity: Original Sin, like having electrical attacks travel through water to damage anyone in it, or hitting electrically-charged trees to detonate them and damage nearby enemies.

I was also surprised at how much the game made good on its promise of a Final Fantasy Tactics styled class system.  Each character you recruit starts with a generic class with a few basic abilities (Sailor), though as you gain experience and pay trainers you'll gradually unlock more classes, each with a handful of abilities, some passive skills (up to three of which can be equipped at a time).  Every 250 XP earned in a class will also grant a star, which can be used to improve a stat or proficiency with weapons or spell types.  There is effectively no limit on which classes any character can use, either, though they can only have abilities from two in use at a time - one primary and one secondary (though purchased stats and proficiencies will carry over to any class).  It does get to be quite a lot to manage late-game when you're running a good-sized fleet of characters and ships, but the amount of depth and customizability it affords is pretty staggering for an indie title.

Ship combat works on a similar principle, though as in the Uncharted Waters games, you do have to carefully move and position your ships each turn - you can only launch an attack after moving, and cannons must be placed at specific points on your ship, with your largest guns generally being broadside-only.  This can be somewhat twinky with ship-to-ship combat (if you have a faster ship you can generally stay just out of their range, picking them off with cannon fire while they can't do anything back to you), but the game also features all manner of sea creatures to give you grief as well, so it's not something you can solely rely on.  Some more fantastic elements creep into these too, like magical cannons that can create icebergs or "living ships" that regenerate health over time, which adds a nice twist.  Either side can also use boarding gear to leap into a timed battle with that ship's crew aboard their own ship, though interestingly, these skirmishes basically exist in a totally different time and place from the ship fights - if a boarding fight ends and you re-board that same ship later, the same units will still be there, in the same state you left them (same if an enemy boards your ship).  Still, felling a ship's crew does hamper its ability to move, so it's actually a viable strategy when dealing with larger fleets of powerful ships that firepower alone won't be enough to overcome.

The game as a whole utilizes a simple mouse-and-keyboard interface similar to the later Ultimas, and exploration seemingly draws some elements from the later games in that series too - you can pick up and move objects with the mouse and double-click to interact and search felled enemies, and skills in battle can be activated through quick-keys or simply clicking icons on the HUD - all very smooth, requires basically no conscious thought once you've gotten used to it.  There is crafting in the game, necessary to get most of the best items, though it's considerably less intrusive than most games - usually just requiring you to combine a purchasable kit with various items you earn by defeating stronger enemies or find in various treasure troves.

The Uncharted Waters style open-world element is a bit less well-thought-out, though.  Trading commodities - the ever-present staple of games like this - is present, though not nearly as deep as you'd think.  There's no virtual economy that booms or busts; instead, you simply buy resources, then take them to another port and sell for a profit, earning more money the further your destination is from the port they were purchased from.  While prices do fluctuate slightly, there's no real risk involved - as long as you buy something and sell it elsewhere, you'll turn a profit.  It's also an inefficient way to earn money until you have a pretty sizable fleet with plenty of cargo space - a guild in all the major ports holds an endless number of randomly-generated delivery or monster-clearing quests you can do, and all generally pay out much better than unscripted trading runs.  Even more silly, though are the cartography and research elements - essentially, you sign a contract with a a cartographer or researcher, then turn in your findings to them for a reward.  In the former's case, you simply explore the map and earn money, with higher payoffs coming as you uncover more of it.  Research is even sillier - virtually every object in the environment can be scanned (by presssing the L key) and your findings turned over to them for a profit.  Obviously, scanning one-of-a-kind objects (such as a certain gate you encounter during the tutorial) earns you more, but you still earn a decent amount for looking at mundane bins, pieces of armor, plants, trees, rugs, signs, and anything else in the environment.  On the upside, this does give you a hefty nest egg early in the game, but it's not particularly realistic by any stretch.  Managing your crew is pretty simple too - as long as you can pay their wages (rarely more than 1 coin a day) and keep morale up, you're good.  Especially you can just stop in at the pub at any given town and, for the price of a few gold per sailor, give them a pretty hefty morale boost (as well as raising their battle stats for a few days).  One can also invest at ports to earn their favor and make them produce tradable items faster and even build their own ports staffed by their crew, though these both tend to be long-term goals and quite costly before you see much return on them.

Despite those shortcomings, though, I found myself pleasantly surprised with Horizon's Gate.  It may not quite live up to its hype and deliver a full-fledged, in-depth sailing sim alongside its tactical RPG element, but it really shines at what it does well.  Combat and character management in the game is surprisingly deep and rewarding, there's a lot of side-areas to explore alongside the main story and virtually no restrictions on letting you explore them at your leisure, and it's got an imaginative and interesting world to journey through.  Rarely since the heyday of Ultima have I felt a game sweep me away like this one did, letting me get truly immersed in its world without feeling restricted by its "video gamey" elements - character management is surprisingly painless and you rarely feel like you're being held hostage by your level of experience or having to farm items and money to progress.  It may not be the deepest game of its kind, but it's one of the most satisfying meldings of open-world exploration and tactical RPG I've played in a good while.  I'm all for supporting talented indie developers, and if this one's concept sounds good to you, I can definitely say Horizon's Gate is worth your while; I've legitimately gotten much more value for my buck out of this tiny $20 indie title than I have out of any recent AAA "narrative masterpiece" that trades in gameplay for a derivative, self-congratulatory storyline and a zillion dollar budget for scenery models and overlong, badly staged and boringly-acted cutscenes you won't ever look at more than once. 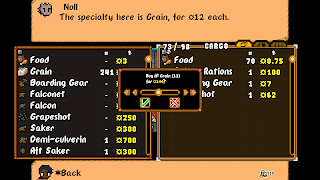 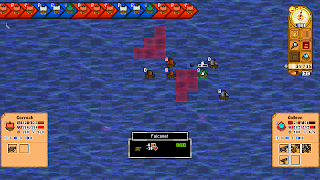