The eighth mainline game in the Yakuza series also serves as a major overhaul in design, controversially changing from from action-oriented combat to a turn-based system and integrating many more traditional RPG elements than earlier entries.  But does it prove to be another unique, quirky and fun adventure in urban Japan, or does Like a Dragon fail to set any fires? 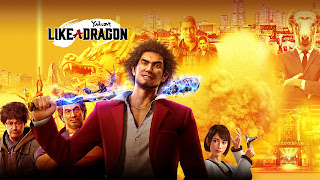 Yakuza as a series has been a relatively formulaic one since its inception - basically a mashup of beat-em-up and RPG elements strewn with plenty of minigames spanning numerous genres - from board games to casino to racing to a rather silly (and spicy) take on Rock-Paper-Scissors.  All strewn over a general atmosphere of silliness on the backdrop of a surprisingly serious crime drama; it doesn't sound like it should all mesh together, but somehow it does, and it's little wonder people have continually come back for more for over fifteen years now.

So, when it was announced that the latest entry in the series would be a more traditional party-based RPG, there was a palpable amount of surprise involved.  In an era where mainstream RPGs had largely moved into more action-driven territory, it seemed like a pretty bizarre decision to take Yakuza's gameplay somewhere it had never gone before.  It also quickly became apparent that they weren't stopping short with it, either - combat was turn-based, and there was a much heavier focus on statistics and elemental resistances overall (and yes, characters do have a Magic stat - very strange for a series that, up to this point, was a relatively realistic one).  The characters are very aware of this too, even directly name-dropping Dragon Quest several times, poking fun at numerous genre tropes throughout and even breaking the fourth wall by referencing their "stats".  "Magic" is equally silly, having protagonists do things like conjure pigeons to attack their foes (by throwing beans), spitting booze-fueled flames, blasting the opponent with (ice-element) champagne or "summon" various characters (via a phone app) to attack their enemies or aid allies.

It quickly becomes apparent that they're having fun with the concept, too.  In a humorous twist on RPG norms, the heroes are anything but archetypal heroes; quite the opposite in fact.  The protagonist is a kind-hearted person almost to a fault, and his foolishness causes him and everyone around him no end of trouble.  His allies are equally flawed, though they use their quirks to their advantage, doing silly things mid-fight like eliciting sympathy from an enemy for their lowly status (getting them to leave an item and exit the fight).  Fittingly, they also have job classes like "Lowlife" and "Deadbeat" for a good portion of the game before more flattering ones become available.

While combat in the game is turn-based, it nevertheless incorporates a number of series norms, as well as having a few elements be dependent on real-time events.  Similar to Mario RPG and its followups, some attacks can deal extra damage through a minigame of sorts - tapping a button or pressing one with good timing will make them more effective.  Similarly, enemy attacks can be blocked by pressing a button just before they impact, reducing the damage they inflict (this becomes trickier with attacks that hit more than once, as one must time a press for each hit).  Characters will also automatically interact with the environment to a degree during their turns, kicking nearby objects at their foe for a bit of extra damage or picking up and wielding objects nearby them as their turn begins.  Finally, some attacks will cause an enemy to be knocked down and stunned momentarily, and if another character lands a blow on them before they get back to their feet, they will do much more damage - helpful for dealing heavy blows to a boss  or taking out weaker enemies quickly.

Elements of other contemporary RPGs creep in too.  As in the Persona series, Ichiban has personality traits that level up throughout the game based on your actions and dialog choices, which in turn can unlock new substories and give him an edge in some minigames.  They will also and will improve the effectiveness of some of his own abilities and resistance to status effects.  Confidence will increase resistance to Sleep status, Charisma will make you more resistant to fear, and Kindness helps with resisting Enrage, to name a few.  While not as integral an element for character interactions as in Persona, it feels more natural than in those games - like a genuine bit of character roleplaying for the player instead of an artificial mechanic.  Boosting relationships with your allies (in conversation scenes at bars) also allows them to build up their "Drink Links" and improve their abilities and job class selections, so it's also well worth doing from a storytelling and gameplay perspective.  (It's also nice that there are no "wrong answers" during these scenes - each one boosts a different one of Ichiban's personality stats, unlike in Persona).

Like a Dragon is also the most technically impressive Yakuza game I've played so far, with its movement and physics in general feeling less stiff and "video gamey" for lack of a better term.  The world is surprisingly seamless, with very little visible loading while you're walking around the city, even when entering shops or encountering plot scenes.  There is a choice for English or Japanese VO, and both have character models perfectly lip-synced with the dialog.  Pathfinding is occasionally a bit suspect during battles, with characters getting hung up on scenery objects, but they never became inescapably stuck in the entire time I played.

The experience isn't without a big drawback, though.  There is DLC, with the pachislot minigames inexplicably being a large, separate (albeit free) download instead of just being on the disc.  They also also add couple of new job classes for $5, which seems a bit silly; I can't help but think of a Final Fantasy game trying the same stunt and getting summarily mocked for it.   Other minigame tie-in content is paid DLC as well, adding more employees to the Management mode (primarily cameos from previous games) for an extra $10 and, weighing in at a whopping $15 each, several costumes and songs for the Karaoke minigame.  All in all, I'd say skip the DLC unless you can get it at a large discount, because it's on level with the PS3 Disgaea games in terms of being horribly overpriced and simply not worth the amount asked.

Regardless of that terrible decision, though, I had a blast with Yakuza: Like a Dragon.  Being a big fan of RPGs, it was fun to see them turn genre tropes and cliches on their heads at every turn whilst simultaneously making a great example of one themselves, taking elements of classics like Dragon Quest and even modern games like Persona and weaving them into the Yakuza format whilst making significant improvements on them along the way.  Even with the changed-up gameplay it's still a Yakuza game at its core, keeping all the drama, surprising depth and sharp humor intact and even doing many of its elements better than more serious attempts by other companies.  Whether you're a newcomer or a series veteran, Like a Dragon is well worth a play. 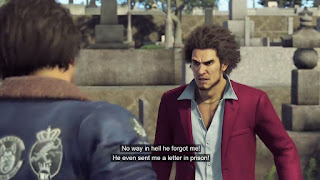 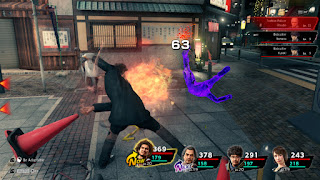 Developer: Ryu Ga Gotoku Studio
Publisher: Sega
Platform: Playstation 4, Playstation 5, XBox One, XBox Series X/S, PC
Released: 2020
Recommended Version: I have only played the PS4 version but all seem to be more or less identical.  It is worth noting that the XBox One version is optimized for play on the Series consoles.
Labels: ⭐⭐⭐½, 👑, 2020, Full Reviews
Newer Post Older Post Home