A little-spoken-of cult classic for the SNES platform, The 7th Saga puts a few interesting twists on JRPG norms, giving the player some freedom of choice and slightly different story paths depending on which character they pick.  But does it prove to be a worthwhile RPG amongst the stiff competition the platform provides, or is it simply to be passed up in favor of more highly-regarded ones? 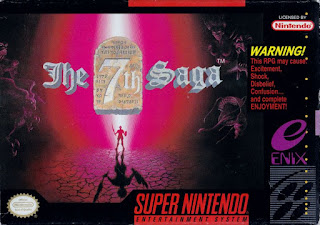 The Super Nintendo is a console with a lot of classic RPGs; little surprise there, as it was the platform where beloved companies like Square and Quintet and Quest really started to rise to worldwide prominence. The 7th Saga is one that's not too commonly talked about, but it has retained a bit of a cult following over the years - enough to get comprehensive shrines on several sites as well as a full-fledged guide on Strategywiki, at least. It's also from a relatively unknown company (the short-lived studio "Produce!", who also made Brain Lord, another low-key SNES title with a bit of a following), though it was published by Enix, which probably helped it attain its fanbase.

Upon playing the game, I can certainly see why it's a popular one, as it does some things that few other RPGs of the time attempted.  The player is given a choice of seven playable characters, each with varying abilities and equipment choices, and most are also of different races.  Kamil the knight is probably the most well-rounded character, getting the widest selection of equipment as well as all-around good stats, and a balance of offensive and defensive magic on top.  Others fit more into the typical RPG archetypes - Valsu the cleric gets mostly defensive magic but is rather weak physically, Esuna is similar but utilizes black magic instead, and Olvan is a dwarf with strong fighting abilities and a few white spells to complement them.  A few less common ones appear too - LUX is a tetsujin (literally "Iron Man"), a strong fighter with a few exclusive offensive spells, but has limited equipment choices and the lowest speed of any character.  Wilme is an alien with impressively high stats (save for magic) but gets no equipment at all until the late stages, and Lejes is a demon (!) with high attack power and a wide variety of offensive spells, but low defense and very limited armor, focusing almost entirely on offense.  It is a little ironic to see a character explicitly labeled as a "demon" in that era of Nintendo history (as they were intent on censoring anything explicitly religious), but they did alter his appearance from the Japanese version to make him slightly less reminiscent of stereotypical demons.  Though the overall story doesn't change, some characters do end up taking routes to destinations than others, so areas you visit with one protagonist may not be visitable with another (at least, not right away).

An interesting facet of this mechanic is that the other six characters you don't choose are also undertaking the same quest, and will interact with you several times throughout, usually in towns after major story events.  In many case they will simply give you a bit of dialog and little else, but they may also offer to join you (though you can only recruit one ally during the game, so it's best to choose someone that offsets your starting character's weaknesses).  Others may challenge you to a duel, which resulting in a rather tough one-on-one match scaled to your level, but you earn a hefty experience/gold reward if you win, so it's generally worth taking the risk early on (later., random encounters will be far easier to overcome and give roughly equal or greater XP).  However, anyone you choose to duel will become your rival for the rest of the game, so you shouldn't pick that option if you want to recruit them.  These interactions are semi-random, though as an NPC in one town helpfully points out, you can "reroll" the results by fighting a few random battles and returning until you get the interaction you want.  Two characters (randomly picked from anyone you don't have join) are traitors to the team and must be fought during the course of the story as well, and if the later of the two ends up being Valsu, the game becomes unwinnable - he gets a high-level that fully restores his HP AND MP, making him effectively invincible.

7th Saga is quite a good-looking RPG for its time, with a presentation oddly more reminiscent of the Phantasy Star games on the Sega Genesis in many respects.  Background tiles are surprisingly intricate and detailed, and enemy sprites are large and animated in battle (a stark contrast to the Final Fantasy series).  You even get to see your character take actions during battle - punching, blocking and casting spells, most of which have unique animations.  Another cool twist is that this actually utilizes the SNES's Mode-7 capabilities - when you get into a fight on the overworld, the camera will pan down to ground level and the enemies will appear in front of you, and the viewpoint will even rotate as you target different enemies on the field.  The mechanics themselves are relatively standard RPG fare (with the odd exception of doing more damage with your attacks if you spend the previous turn defending), but the impressive presentation helps set 7th Saga apart from its competition nonetheless.

The 7th Saga does have a few glaring flaws, though.  One that's quickly noticeable to long-time RPG players is that there is little balance between battle awards and enemy difficulty; tougher enemies generally don't give much more than weaker ones within the same area, or even in adjacent areas.  A prominent example comes early on the second continent, where enemies called Brains award high XP and are relatively easy to defeat.  In contrast, the next major area has exponentially harder enemies (appropriately named "Defeat") who inflict massive damage and a litany of debilitating status effects, but give only slightly more XP.  Needless to say, I found travelling back to the first town of that continent and grinding against Brains a much less frustrating endeavor than trying to stick it out against Defeats.  Enemies in dungeons also tend to be significantly weaker than those on the surrounding overworld, and seemingly mundane foes can drop very powerful items (the aforementioned Brains, despite being seen relatively early in the game, drop Recoveries, which are sold in no shops and fully restore HP and MP).  Late game the problem gets compounded further; normal enemies become exercises in sheer frustration (constantly healing and reviving one another and having absurdly high HP and Defense) while bosses are laughably easy in comparison. Abusing buffers and stocking up on restoration items becomes mandatory to survive.

The difficulty balance is also another point of contention among the game's fans.  Put simply, the US version of the game is much harder than the original Japanese release, buffing up enemies and drastically nerfing the playable characters' stats and drastically reducing all experience earned, necessitating much more grinding.  Fights with the other seven champions are no easier than their Japanese counterparts, however, which can result in these battles being nearly impossible (or literally so, see above) as they scale with your main character's level.  At a certain point in the game you will also travel back in time, and enemies in the past are far, far beyond the level of enemies in the present; if you haven't leveled up enough by that point, you'll be unable to overcome even the weakest enemies here and your run is basically over.  This was a problem in the original Japanese version as well, but is definitely much more pronounced in the western release.  Essentially, you'll be doing much more grinding and save-rotating if you play that version.

That is a strange contrast to one of 7th Saga's other major features that would otherwise help to cut down on excessive combat and grinding.  At the start of the game you're given a "Crystal Ball", which has a number of features.  The one that's brought to your attention right away is pointing out the locations of the seven runes (the main objective of your quest), but it also comes into play on the overworld and in dungeons, showing enemies on the radar as moving white blips and giving you a chance to avoid them (to a point - they move quickly and constantly spawn so it's just a matter of time before you're caught, but nevertheless, you can sometimes use this to your advantage).  It also points out unopened treasure chests, too, which takes a lot of guesswork out of dungeon crawling - you can quickly determine whether a path will lead you to a treasure or it's just a dead end.

Despite its uneven difficulty, and some frustrating design hiccups, though, I found The 7th Saga to be an enjoyable experience.  Its concept of having multiple paths depending on your character choice was a pretty novel one for the time, and it had an impressive presentation for 1993 to boot.  I don't know if I'd quite label it a hidden gem, but it is a unique and interesting game that's worth a look. 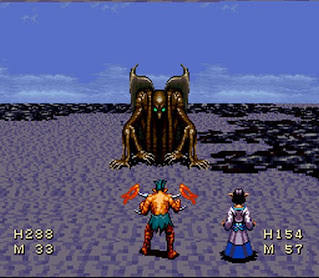 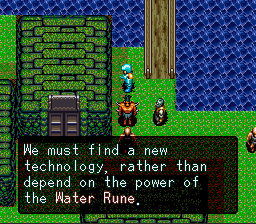