The latest title from Supergiant retains their trademark gameplay and narrative design but moves it all into the structure of a roguelike.  But does this change provide a path to another successful action-RPG experience, or is it simply a misstep for a well-regarded indie studio? 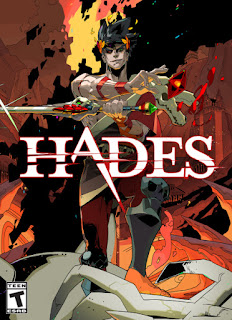 Supergiant is a relatively young indie studio, but despite that they have become a very well-known and respected name in the field.  All of their previous releases - Bastion, Transistor and Pyre were all praised for their stylish anesthetics and polished design, particularly in their dynamic narrative that would adapt to the player's actions in real time.  Hades looked to be another in that trend, this time incorporating a lot of roguelike elements into the mix.
The combination proves to be quite an interesting and well-executed one.  As in most every game of this type, you play as a single character (Zagreus, son of Hades) and start with only the barest minimum of a loadout - a single weapon, a relatively low HP total, and a handful of basic moves.  The sword, for example, has a slash, a charging stab, and an area-of-effect power hit.  You'll also get an evasive dash and a basic ranged attack called a "Cast" that deals damage and sticks to an enemy for several seconds after the fact.  Bonus damage is inflicted by attacking enemies from behind, and they can be stunned for a good bit by knocking them back against a wall.  Various traps throughout the dungeons can also be turned to your advantage, but can damage you as well, so some caution is required when using them.
As you venture through the game, you'll earn semi-random powerups from the gods of Olympus, which in turn will grant various upgrades to your abilities.  Zeus can add electrical damage to your attacks or cause an electrical burst when you dash, Ares will add a "doom" effect in similar fashion or turn your Cast into a whirling blade that deals continuous damage, and Aphrodite will apply a Weak effect, causing enemy attacks to deal less damage.  You can also unlock a Call ability that summons a god for an effect - typically dealing damage - with greater effect achieved after you fill the bar to maximum.
It's certainly possible to beat the game with just that, but definitely not easy; particularly as in many action-roguelikes health restoration is rather tough to come by and battles only get faster and more intense as the game goes on, so simple boosts will only get you so far.  This is where the roguelike element comes into play.  As you venture through the dungeon, you'll collect three other types of currency alongside the standard gold for shops - Gems, Darkness and Keys.  Gems let you purchase "remodels" for the dungeon, which add things like more shop rooms, urns that give you gold when broken, or fountains that will restore some of your health (as well as remodels for Hades' castle - mostly just cosmetic, but a nice customization element).  Darkness purchases a litany of upgrades for Zagreus, from extra health to having more Casts to getting up to two extra chances (refilling your health to the midpoint once it hits zero).  Keys in turn unlock more of these, as well as granting you more weapons to utilize - a shield, spear, gauntlets and even a gun are eventually unlocked via keys, and these can be upgraded even further by collecting boss-specific items.  Basically, the game is built around you dying so you can power up your character or try a new weapon for your next attempt, until you eventually you've got enough to finish the story.  Per Supergiant standards, the game also subtly encourages experimentation with each of the different weapons, giving one a random 20% bonus to any Darkness you earn each time you return to the weapon chamber.  Zagerus's room also has a list of "prophecies" to fulfill by selecting various upgrades during your runs, and completing one will earn you a large bonus of one of the three resources, making it worth your while to try every option you're offered.
Unlike many roguelikes, Hades does carry quite a strong story too, and the constant death and resurrection that make up the central focus of the gameplay tie neatly into its design.  Each time you return to Hades' palace, there will be new interactions; some merely humorous (Hypnos poking fun at your recent method of death), while others will gradually reveal more about all of the players in the plot - Zagreus himself, of course, but also more about Hades, the underworld in general and what led it to its current state.  Seeing all of these personalities interact is a treat in itself; the top-notch voice acting from all involved, paired with Zagreus's suave and smooth-talking personality, makes him one of the most fun protagonists in recent gaming memory.  More interactions are also earned by collecting Nectar in the dungeons and gifting it to the various gods, which results in more dialog but often also nets you a gift in the form of a Keepsake.  These in turn can be equipped to gain a bonus for your next run (everything from more HP to bonus damage to having a higher chance to get rare upgrades), and each has three tiers of upgrades that are unlocked through subsequent use.
To be brief, Hades is a triumph; not just another well-executed action game from Supergiant, but a seamless integration of narrative, real-time combat and roguelike elements into a thoroughly enthralling experience. The design is addictive and rewarding enough that you don't mind dying to the challenging obstacles time and again, aided in no small part by the excellent writing and voiceover for all the characters involved.  Those just in it for the story have much to enjoy (and can enable God Mode to experience it without having to deal with dozens of deaths and restarts), but those in for a true test of skill can experiment with all of the various loadouts available and see how far they can get.  A masterpiece of design, and dare I say possibly the best action-roguelike ever created. 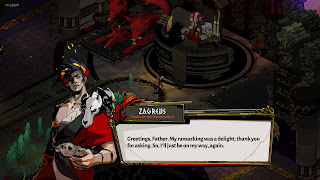 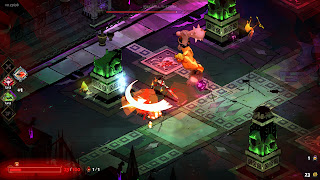