The SaGa series all but vanished in the west for over a decade after the critical flop that was Unlimited Saga.  Scarlet Grace, released fourteen years later, was the first to see a release outside of Japan since then, but would it prove to be a successful return, or just another disastrous entry for an already niche franchise? 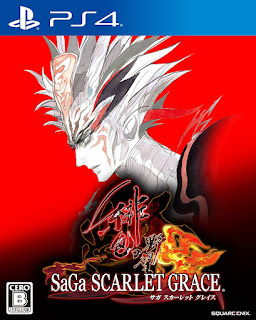 It's no secret to anyone with a fondness for Playstation 2 RPGs that Unlimited Saga was not a well-received game; owing to its complex and poorly explained mechanics,  a rushed development that resulted in steep leaps in difficulty and a threadbare presentation with the barest minimum of animation, it's a game that few ever bothered to learn to play, let alone had the patience to complete.  Perhaps as a result, a localized remake of Romancing SaGa a few years afterward got little attention and sold poorly, and subsequent releases in the series (mostly remakes) wouldn't surface again in the west for a very long time.

Scarlet Grace would be the franchise's first new entry to see a western release since 2005, and thankfully it does a much better job of being a captivating experience inspired by old-school western RPGs.  The game's opening in particular is reminiscent of games like Ultima, asking the player a series of questions to determine which character they begin as, as well as which quests they may have already completed in previous playthroughs (which affects some events in the story).  The game's world is also largely free-roaming, letting the player complete most quests in any order they wish and venture freely around the map to discover new ones, though there are strangely no dungeons (apparently due to budgetary constraints) - nearly all events take place right on the world map.

The core of the game's design takes a few steps away from the SaGa norm.  There is significantly less of a random element than most, and particularly much less than Unlimited Saga; though HP gains after battle and techniques are still randomly learned in battle ("sparked" in game terminology), one's stats and abilities are now heavily governed by the type of equipment they have equipped.  Breakable weapons are a thing of the past as well, as are limited point pools that govern how many times skills can be used between rests.  The HP/LP system returns as well, though losing all LP is no longer "permadeath" and LP can be gradually regained over time by swapping a character out of the combat formation.

Combat retains a few elements from other SaGa games, though many are relatively original too.  The player has a choice of several "formations" to pick, each with benefits and drawbacks for the various slots within.  For example, the "Desert Lance" gives one character less BP cost with all skills and greater speed and accuracy, but lowers the speed of everyone else in the group.  Royal Hearts puts two characters in the front and three in back, with the two up front getting a slight boost to damage and speed but giving them a higher chance to be targeted.  Each formation also has a different starting and maximum BP level - generally starting at around 4 and maxing out at 8.  BP governs how many characters can act in a turn and what moves they can perform - basic moves generally costing 1 or 2 while stronger ones with more powerful effects cost more.

Turn order (and alteration thereof) is another prominent mechanic in the game.  Throughout each battle, you can see the order any given character (friend or foe) will act during the current turn if you give them an action to perform.  Some moves can delay enemy turns or intercept enemy moves before they occur, letting you sneak in an attack and potentially defeat them before they can deal damage.  Doing so is actually quite beneficial, because defeating a foe between two or more allies on the timeline will result in a Unite Attack, causing all of the characters whose icons are now touching to automatically do a powerful combo to a remaining enemy and reduce the BP cost of their attacks on the next turn.  Enemies can do this to the player as well, though, so caution is necessary to protect weakened allies and prevent enemies from unleashing a nasty combo of their own.  Spellcasters are another important thing to protect, as their spells often take a lot of action points and multiple turns to cast, and if they're stunned or defeated in the interim, it all goes to waste.  One way to do this is via the Taunt/Frenzy mechanic.  Some skills have a Taunt trait to them, which makes an enemy more likely to target their user.  If the same user repeatedly uses a Taunt on a particular enemy, that may cause them to Frenzy and focus their attacks only on that character until one of them is defeated - a risky tactic in some respects, but useful to draw fire away from weaker characters as well.

Scarlet Grace also contains a crafting system, though thankfully it's nowhere near as complex (or poorly-explained) as Unlimited Saga's.  Defeating foes of particular types earns materials, which can be spent in towns to upgrade weapons or pieces of armor along several upgrade paths - some featuring higher stats or elemental resistances than others.  Different shops throughout the world also have "specialties", reducing the number of materials needed for particular crafts, and earning favored status by visiting repeatedly will further reduce the cost.  It is also to the player's benefit to upgrade whenever they can, even if this means some grinding, as shops can be restricted at certain points in the plot; thankfully, the game does warn you of this right off the bat, so there are no unpleasant surprises later.

Like most, I didn't really expect a lot from a SaGa revival; I expected that it would just remain another niche game with little widespread appeal.  I haven't been completely disabused of that idea (as far as I can tell, it hasn't been a particularly high-seller even in Japan), but Scarlet Grace is nonetheless a welcome return for the long-neglected SaGa series.  It has a significant random chance element and its gameplay is rather simple and one-note, but it has an interesting overarching story split among four different characters' questlines and is decently fun in spite of that.  I even found myself impressed with its animation quality and the fact that they hired professional voice actors to play out snippets of dialog and combat lines (and yes, it is dubbed into English), proving that Square really did want to distance themselves from Unlimited Saga's reputation as much as possible.  So if you want something that's overall very simplified mobile game in design, but nevertheless well-made and fun in short bursts, Scarlet Grace is one you may want to give a try. 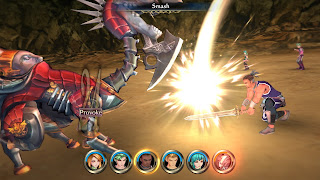 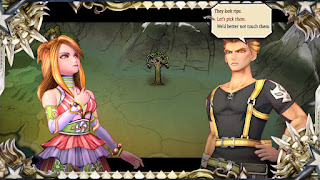 Developer: Square Enix Business Division 3, Studio Reel
Publisher: Square Enix
Platform: Playstation Vita, Nintendo Switch, Playstation 4, Windows, Android, iOS
Released: 2016, 2019
Recommended Version: All versions seem to be pretty much the same, though the game is only available digitally in the west.  The Switch version has a bit of lag when loading animations between turns in combat but otherwise plays fine.