A late-generation release by Sacnoth, a company headed by Hiroki Kikuta (who made his name at Square composing for the Mana series), Koudelka was an experimental blend of RPG and survival horror elements.  But did it prove to be a worthwhile combination for those few who played it, or was it simply eclipsed by the Shadow Hearts franchise that followed it? 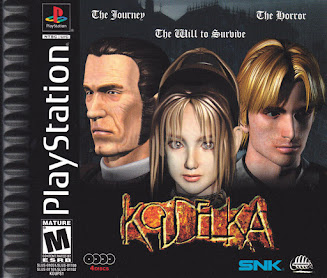 A fair number of people enjoyed the Shadow Hearts series on the Playstation 2 - indeed, its second entry was regarded by many as one of the best RPGs on the system - but its origins were not quite as auspicious.  The first Shadow Hearts did relatively well in reviews, but sales were hamstringed by an M rating because of its heavy horror elements.  Even before that, though, there was one other game built on its model. That game was Koudelka, released for the PS1 in 2000 only a few months before the Playstation 2 made its debut.  That unfortunately timed release, plus mediocre reviews overall, led to it being overlooked by almost everyone; indeed, even as a big fan of Shadow Hearts, I didn't know this game existed until several years after the fact.

When I eventually played it, though, what I found was a game that was very well-made on quite a few levels.  Right from the beginning, Koudelka shows off high-quality FMVs easily on par with those in Square games, and even some surprisingly well-done in-engine cutscenes that utilized motion capture and professional actors for voiced dialog (with very little conveyed through simple text).  They definitely show that off in every way they can, too - despite it being a relatively short game (about 10-12 hours for a first playthrough), the cutscenes and voicework ensure that it takes up four CDs.

The gameplay didn't prove to be nearly on the same level, though.  Essentially, this is a slow-paced, puzzle-driven survival horror title, made even slower to experience by a tactical turn-driven combat system.  When you encounter an enemy the screen fades to a 7x7 grid that players can move freely around (though they cannot be on the same line as the enemy, nor even cross through it).  Each turn characters can move, attack adjacent tiles with a melee weapon or cast spells at range, all of which have fairly lengthy animations to endure.  Weapons have a significant chance of breaking each time you use them, and most also have elemental properties, none of which made much sense to me (a hammer that deals Holy damage, yet heals even headless corpse enemies on a hit?).  Strangely, there also isn't any real difference between the three playable characters - all have the exact same pool of equipment to use and spells to cast, and the player is even given full control over what stats they want to increase each time someone gains a level, which is more than a touch broken.  Indeed, once I figured all that out, I just ended up pumping everyone's Intelligence, Vitality and Piety up with every level; Intelligence boosts spell power, while Vitality and Piety boost maximum HP and maximum MP/Magic defense respectively.  Furthermore, putting one point into the latter two on a level will fully restore your current total and both grow exponentially after a certain point, so it became viable to simply rely on spells throughout the whole game.  Not to say that the game is easy; far from it in fact.  Enemies seem to deal out completely sporadic damage - one turn they'll hit everyone in your party for single digits, the very next they'll target a single person and hit four times for more than double their maximum HP.  Almost all of them inflict some manner of status effect too, and heaven help you if your entire party is Silenced or Paralyzed and you don't have enough items to quickly cure them (and hope they don't just reapply them the next turn), because they'll probably wipe out your whole party and force you to redo an hour of work.

Despite all that, though, Koudelka still managed to hold my attention to the end, in no small part for its impressive production values and story.  The setting - a creepy, dilapidated castle -effectively dark,  moody, and well detailed, with very few drab rooms to explore.  There are a fair number of interesting (and at times, downright twisted) characters throughout the adventure, and as mentioned, the character animation and voiceover is surprisingly enthralling, giving it the feel of a well-produced horror film.  I was pretty well engrossed in it throughout, and despite my gripes with the gameplay,  I'd honestly say it's one of the most impressive horror tales on the original Playstation.  No small feat given the sheer amount of competition it had from franchises like Resident Evil, Clock Tower, Dino Crisis and the first Silent Hill.

One significant omission compared to those games, though, was its replay value.  As mentioned, the game is relatively short for an RPG, and once you've completed it, there's not really much reason to come back - you don't unlock any new bonus items or hidden things for completing it faster, and while there are two different endings, the only factor determining which you see is whether you win or lose against the final boss.  Strangely, though, you get what I consider the more satisfying of the two endings by losing, so if you hit a brick wall against the final boss, well, it's not really worth grinding out levels to see the other one.

For fans of the the Shadow Hearts series, it's interesting to see where the franchise got it's start, and even non-fans can easily easy to be wowed by how much effort was put into telling its story.  However, because of internal strife during the design process, the gameplay ended up being very mediocre and dragged the whole experience down.  This in turn led to poor critical reviews, lackluster sales and the rest of a planned franchise (following other members of Koudelka's family throughout Europe) being cancelled as Kikuta left the company he founded and the remaining staff took things in a new direction.  As such, Koudelka now commands asking prices of over $200 online, ensuring that this one is for only the most die-hard of Shadow Hearts fans and collectors of rare RPGs. 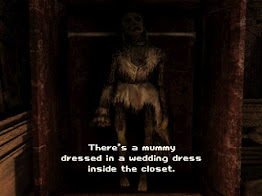 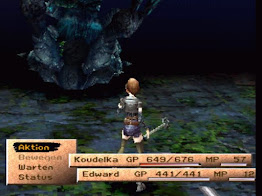