SaGa Frontier 2 is noted for being a vastly different game from its predecessor in almost every way, changing up its aesthetic, its gameplay and even many of the fundamental elements of its design.  But does it prove to be a worthwhile adventure regardless, or is it just too much of a changeup for even fans of the highly experimental SaGa franchise? 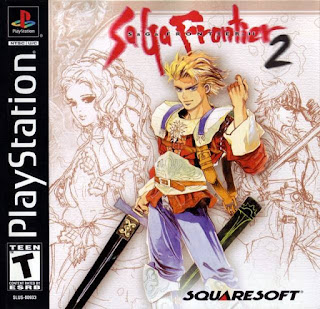 The SaGa series has never been a hugely popular one outside of Japan, but it has nevertheless found a niche fanbase, with its fans praising its experimental nature and open-ended design that draws influence from western RPGs.  Indeed, most games released under the name were almost entirely open-ended, having the player build a party, train them up and explore the world and all it has to offer at their leisure.

2000's SaGa Frontier II, on the other hand, was almost a complete 180 from that school of design.  Instead of being allowed to freely explore the world, its gameplay was almost entirely linear, having the player pick scenarios from a simple map menu that highlight points along a linear timeline, spanning its protagonists' entire lives.  Some are simple, non-interactive story segments, while the rest would stick the player in a small geographic area and having them advance through it, only being allowed to save their progress after completing it (though they can create a temporary "quicksave" in the interim).  The overarching plot follows two distinct storylines; the tale of Gustave XIII, a prince exiled from his country for lacking Anima (magic, essentially), and the other Wil Knights, a "Digger" (treasure hunter) in search of a legendary artifact. These two plots take place in the same world, with events in one story affecting the other, though the two characters never directly interact until close to the end of the game.

On the other hand, this does afford the game a degree of character depth that few other titles in the series offer.  Gustave is easily one of the most complex protagonists in the series, having low self esteem as a result of his upbringing and generally being manipulated by those around him as a result, even being dragged into a war with the country of his birth that he's reluctant to fight himself.  Wil, on the other hand, comes from a long line of treasure hunters and deals with rivalries and family drama throughout his story.

SaGa Frontier 2 is also a stark contrast from its predecessor in presentation.  Whereas that game was set in a bizarre world of fantasy creatures and science fiction elements, with CGI backdrops and quite a lot of synthy electronic tunes, 2 opts for a strictly medieval setting and a "hand-crafted" style.  Sprites are hand-drawn and cartoonish, backdrops are finely-detailed watercolor paintings and the music is much more mellow and instrumental in sound, with a lot of piano tracks throughout.  It's easy to mistake it for an entirely different franchise at a glance, and it easily could have been if not for the handful of game mechanics tying it to the SaGa brand.

Case in point, combat in SaGa Frontier 2 remains perhaps its only largely consistent element.  You get a party of up to four characters and battle enemies when you make contact with them on the map, taking them on in a turn-based system.  The controversial weapon durability system returns from the earliest game in the series (though steel weapons have unlimited durability), and attacks are powered by either SP (for magical attacks) or WP (for special moves performed with weapons).  Skills are still randomly learned through battle, with odds for gaining them becoming better as you battle stronger enemies than yourself, and stat gains are also randomly awarded after battle.

A few change-ups are introduced, however.  One prominent one is that winning a battle doesn't restore all of your HP; just a portion of it.  Perhaps as a result of this, any character can now restore HP even if they don't have access to skills or items for that - they can instead spend one of their LP at the top of a turn to fully recharge their HP.  You also don't necessarily have to defeat every enemy to win.   Sometimes defeating enough will end the fight in a surrender, or you can attempt to negotiate a truce, chasing enemies from the field or, if you're outmatched, pleading for mercy can sometimes cause them to spare you.  Certain skills can increase the odds of such negotiations being successful, though I didn't end up using this feature a whole lot during the time I played.

As the game centers on a battle for the right of succession, I suspected that the game would incorporate some Suikoden-like elements, and I was actually correct in that regard.  Somewhat similar to Suikoden, there are three types of combat - the aforementioned SaGa style battles, one-on-one duels, and large-scale war battles, though they don't bear too much resemblance to that game's counterparts.  Duels are a somewhat strange beast, operating largely similar to the standard combat system save that you pick 3-4 moves per turn and watch them play out before choosing again.  Some attack moves can be chained together for extra damage, while other commands exclusive to this mode can do things like enhance the power of your next attack, give you a greater chance to block an enemy's attack, or increase the chance of hitting with your next move.  Its design is a bit overcomplicated, though - I won almost every one of these by simply choosing to Charge, then picking my strongest attack to deal extra damage with it.  Do that for two or three turns, maybe throw in a Parry or two, and most enemies will have their HP depleted long before you ever do.

Larger-scale war battles are also here, though they actually resemble Suikoden III's more than the second game's.  Each side gets a number of units that move across a grid, and when one side's moves into the same space as the other's, a clash occurs, playing out like a single round of the standard combat system.  The side that sustains more damage during this is declare the loser and driven back to the place they last moved from.  Interestingly, though each unit can only have four active characters at a time, fallen ones will be replenished from a supply of reinforcements at the top of each turn, one at a time.  Therefore, if a unit loses a character or two during a clash, it's often a good idea to have them retreat for a turn or two so they can regroup and join the fray again later.

SaGa Frontier 2 is arguably the oddest game in the series, doing away with almost everything that drew people to the franchise (and particularly its predecessor) in the first place.  The series trademarks of open-ended design, a surreal science-fantasy setting and even open-ended character customization are largely discarded in favor of a linear fantasy tale that puts heavy focus on interpersonal drama.  In fact, if it weren't confirmably written and directed by series mastermind Akitoshi Kawazu, I'd swear the franchise had been co-opted by an entirely different team of developers for this entry.  But in a way, it also encompasses what SaGa has always been about - an experimental series that takes unconventional ideas and inspiration from western computer RPGs and tries to make an interesting experience out of it.  The game certainly succeeds on that front, telling a complex and personal tale of two very different protagonists embarking on their own journeys, then coming together at the end to save the world.  But in a time period when RPGs were beginning to become more open and strive for a realistic sense of scale, making you feel that you were exploring and interacting with a huge living world, SaGa Frontier 2 certainly stood out like a sore thumb for its restricted design. 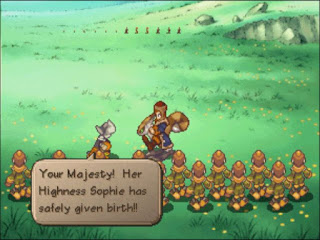 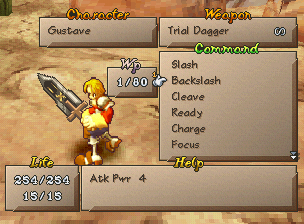