After a number of spinoff franchises and taking the series into true 3D, Strange Journey was a bit of a throwback for Shin Megami Tensei, returning to the first person dungeon crawler format that it began as.  But does Strange Journey prove to be a worthwhile return to form, or is this just an example of an uninspired cashin made to get a few bucks from old-school fans? 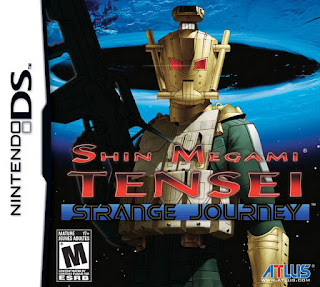 Shin Megami Tensei as a franchise has long had a presence in Japan, but for a long time went unreleased in the west; probably in no small part due to prominently featuring religious deities and the pervading theme of making deals with demons to secure more power for later challenges.  It's also one of the very few franchises I know of to unabashedly portray Jehovah (rendered in the Hebrew spelling, YHVH) as a power-mad antagonist bent on control of everything, so there's that too.  Regardless, it finally got a foothold in the west in the Playstation era with games like Persona 2: Eternal Punishment (the latter half of a two-part story - ironically the first wouldn't be released until over a decade later), Shin Megami Tensei: Nocturne and Digital Devil Saga.  Probably the first big break for the series, though, was Persona 3 and 4, an innovative blend of school sim and dungeon crawling elements with a flashy presentation and some very well-written characters.

Still, the franchise's earliest entries retained a cult following among fans, particularly those of old-school PC RPGs like Wizardry.  It certainly showed its inspiration from that franchise to a T, with its first-person perspective, maze-like dungeons with plenty of traps and frequent encounters with huge hordes of enemies, and having to carefully manage one's limited resources in order to complete major battles (all of which were seemingly designed to be insanely difficult).  Not to mention some very grim themes throughout their storylines, including a nuclear war on Japan - more than a bit ironic considering that country's history.

Strange Journey seemingly was made as a throwback to that, albeit utilizing the same engine as another Atlus game heavily inspired by the old-school dungeon crawler RPGs of yore - namely, Etrian Odyssey.  Still, they do a good job capturing the essence of classic Megami Tensei, putting heavy emphasis on making deals with demons and fusing them to create new ones.  The distinctive moon phase system returns too, affecting a number of gameplay elements (most prominently one's chances to recruit demons during a particular attempt - they're more willing during a new moon and completely wild during a full one).   As in the older games, the protagonist is an unnamed character and the only one of the group who can use traditional equipment, and commands a somewhat more limited (though freely changeable) skill set that can be affected by equipping different guns and "Apps".  The latter work a bit like the skills from SMT: Nocturne, allowing for not just extra abilities in battle, but playing a supportive role too - lowering or increasing the encounter rate, allowing you to speak to enemies that normally can't be spoken to (generally unintelligent ones like zombies and slimes), or boosting item drops after a battle.

Some conveniences of the newer SMT games are retained, though.  Unlike earlier titles (and Etrian Odyssey), Strange Journey does have an auto-map on the bottom screen at all times, allowing for easier navigation through the samey-looking mazes.  The annoying Magnetite system of earlier games (a resource earned by defeating enemies and depleted as long as you had demons of your own summoned) is still gone as well, eliminating an arbitrary and annoying resource management/time limit element from the proceedings.  Finally, while the game can require a lot of grinding and micromanagement, there is an option to import another player's demons via a 32-bit password system, giving you an out if you ever find yourself stuck and unable to proceed.  Granted, it's not an ideal solution, as powerful demons can be extremely expensive in terms of money (hundreds of thousands of Macca, if not more), but the option is there at least.

Similar to Etrian Odyssey (and Persona 4), a significant mechanic in Strange Journey is defeating enemies to win items from them, then selling them to the shop to unlock equipment upgrades for purchase - effectively a "crafting system" of sorts.  Thankfully the game is fairly generous with these and there are few "rare" enemy types to encounter, so it doesn't end up being as tedious as one would expect.  As for equipment itself, the player gets a basic, elemental-free melee weapon in the form of a knife, a plethora of guns that can have various elemental properties, and armor that almost always resists one or more elements in exchange for being weak to another.  Naturally, knowing what enemies to expect in a given area and changing one's equipment to meet it accordingly is just as important as managing one's demons, particularly as the game ends immediately if the main character dies.

So, does Strange Journey work as a throwback game for classic Megami Tensei?  Well, I certainly think it does a good job.  While it does retain a lot of modern quality of life upgrades and a handful of mechanics from later games in the series, it also very much keeps an eye on what made the franchise a hit to begin with - first person dungeon crawling with a heavy emphasis on party management and keeping abreast of elemental strengths and weaknesses to see one through battles.  It even learns from many of the more broken tactics present in earlier games, with most bosses punishing the player for abusing stat buffers too much, for example, or even adopting such strategies themselves in a few cases.  And of course, it doesn't skimp on the dark themes either, with some very twisted scenarios and bizarre characters throughout, as well as the series' trademark sense of choice that will take the player down multiple story paths and lead them to one of several endings, giving it some replay value as well.  Fans of old school Megami Tensei, or just the old, super-challenging dungeon crawler archetype in general, should have a lot to like with Strange Journey. 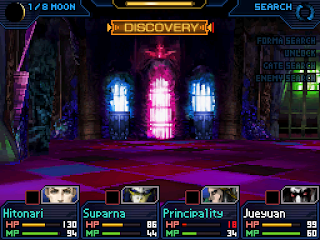 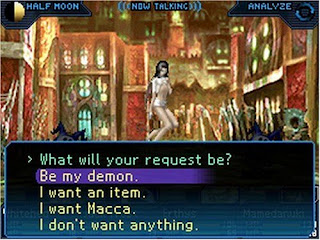 Developer: Atlus, Lancarse
Publisher: Atlus, Deep Silver
Platform: Nintendo DS, Nintendo 3DS
Released: 2010, 2018
Recommended Version: I've only personally played the original release on DS.  However, the game did get a rerelease on the 3DS in 2018 which adds in new content on almost every front - characters, story elements, paths, items, skills and voiceover throughout.  I've heard conflicting reports about it, with a handful of people criticizing these new elements as feeling out of place in the original story.