Might and Magic Book One: Secret of the Inner Sanctum

A relatively late-comer to the '80s CRPG scene, Might and Magic Book One was the first in a long-running dungeon crawler series that continues to get spinoffs to this day.  But is this first-person dungeon crawling adventure worth playing today, or is it simply overshadowed by other, similar games in an already vast genre? 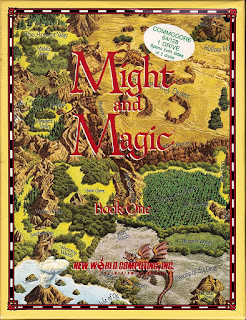 Wizardry is undeniably an influential game, providing the template for not just every other CRPG of the time, but even paving the road for prominent Japanese RPG franchises like Final Fantasy and Dragon Quest.  Visiting its earliest entries today, though, is a bit of a tall ordeal - not only are they notoriously finnicky to get running (being from the day when one would put a disk into their computer and boot-load straight into the game), but they're also notoriously tough games to play.  Not only is the UI dated in a lot of ways (requiring you to type in spell names every time you want to cast one, for example), but the games are punishingly difficult.  Virtually everything in the game relies on random chance (influenceable by stats but otherwise completely out of the player's control), and even one encounter gone wrong can completely wipe one's party, forcing them to create a new party to retrieve and revive them at a very high cost (and even that can go wrong, resulting in them being turned to ash or lost permanently).  The games do keep track of you leaving town too, so the classic trick of resetting the machine to prevent progress loss wasn't a viable one either.

Might and Magic was another game built on its model, though a relatively late-comer to the game (which feels a bit odd to say considering it came out in 1986 - only two years after I was born).  Like Wizardry before it, one rolls up a party of six characters, picks one of six classes for them, which align closely with the four staple classes of Dungeons and Dragons (Knight/Fighter, Robber/Thief, Cleric and Sorcerer/Mage) and a couple hybrid classes (Paladin and Archer), and then they're dropped into the game to try and solve its mysteries by discovering and following in-game clues.

Might and Magic makes a lot of common-sense improvements to the format, however.  One that I found quite welcome was that healing spells have a fixed effect, thereby allowing the player to heal up their party without having to waste numerous spells on bad rolls (that accursed 1 on a 1-8 roll was an all-too-common sight in Wizardry).  Many spells also scale up in power as the character's level increases, keeping even low-level spell slots useful in the long run.  Resting fully heals the party, which is a bit easy to abuse, but is considerably more efficient than Wizardry's cumbersome inn system.  Ranged weapons exist, allowing characters in the back rows to deal damage while still remaining relatively safe.  Race, gender and character alignment (Good, Neutral and Evil) factor into puzzles the player encounters, making them more significant choices overall (though the player can change gender and alignment mid-game via certain events).  While combat is still a major part of the game, one can also undertake a large variety of quests; completing these tends to earn you large amounts of money and gold in one fell swoop, adding some variety and significantly cutting down on sheer grinding.  Finally, retreating from battle is more useful than in most games, as it doesn't simply keep you in the place where you are while making enemies vanish - instead, it places you at the "safest square" on the current map, which is usually an inn or the dungeon entrance; a lot more beneficial for your long-term survival!

Might and Magic also incorporates a few unusual mechanics among CRPGs, especially for the time.  While games like Wizardry and Pool of Radiance tracked a character's age, it effectively had no bearing on the gameplay.  In M&M, aging is implemented as a feature and characters will actively grow older over the course of the game - not just from resting, but traveling the world (which takes much longer without a character versed in navigation) and with some spells causing them to age more rapidly.  Stats weaken as character reach old age and give them a chance to die in their sleep once they are above age 75.  However, there are ways to reverse aging as well, with one of the more prominent ones being the Cleric spell "Rejuvenate" which removes 1-10 years (or, in the event of a failure, adds 1-10).  Enemies will often attack from the side or behind, which can shuffle which characters are in their attacking range; this effectively means that your mages and thieves can't just chill in the back row - their fighting stats should ideally be up to snuff too in case they get caught having to duke it out.  You also have more options before entering battle - in addition to just choosing to fight or flee, you can attempt to bribe an enemy to get them to flee, or surround them first to give yourself an advantage.  Dropping to 0 HP is also not an immediate death; you just get KOed as long as you don't take too big a hit, and can be revived and brought back into the fight by your allies.  One can save the game at an inn and quit, and if their party gets wiped, they can simply restart from the point of their last visit - a stark contrast to Wizardry where dying generally meant redoing the whole game from scratch (at least until such time that you could reach the point in the dungeon where the previous party died and recover their bodies, then shell out a hefty fee to revive them).  Safeguards are put in place to prevent you wasting spell points at times they would be useless; ie using non-combat spells in battle and vice versa.  Enemy variety is surprisingly good, too, with plenty of different types to encounter and nearly all of them having some unique quirks to adapt to in order to maximize your chances of success.

Might and Magic was also notable for the fact that it put the player in a large and contiguous world; towns, the overworld and dungeons are all directly linked in a surprisingly logical way, and while there is a fast travel system, one can easily navigate to almost any area in the game through more conventional means too.  From deserts to caves to dungeons to towns, there is quite a lot of variety in the locations, and with over 50 16x16 maps to explore, there are plenty of secrets to discover throughout.

A few things about the game still do feel a bit dated, though.  There is still a lot of grinding involved, particularly early on when your party is weak and armed out of the gate only with clubs and a small amount of food (but no cash).  Something that took me a bit of to figure out is that you don't automatically collect gold or even get prompted to open a chest after a battle, as in Wizardry; instead you have to Search the area to find the bag/chest the enemy drops, then inspect it for traps or just throw it open.  Visually, the game also leaves some things to be desired - there is an overall lack of animation, and combat is almost entirely handled through a drab text-based UI.   Spells are also not listed anywhere in game; you have to consult the manual to find what spells correspond to each level and number, and how many gems they may cost to use.

Despite those hiccups, though, the first Might and Magic is still a solid game.  It may not be as highly regarded as some of its sequels, but it's still a well-made RPG for its time.  It's considerably less frustrating an experience than most of the other first-person dungeon crawlers of the time, building itself more challenge and problem-solving rather than endless RNG-bashing and, of course, not forcing you to start from scratch when your party gets wiped.  There are quite a few puzzles to figure out and mysteries to solve throughout the world, and while a bit dated visually, the sheer size of the game's world is impressive, particularly for 1986.  It isn't hard to see why the first Might and Magic is still a well-regarded game among long-time RPG fans, as it holds up better than much of its competition from this era. 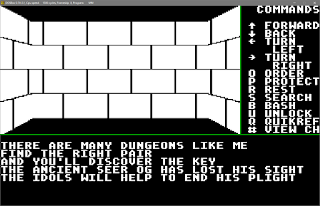 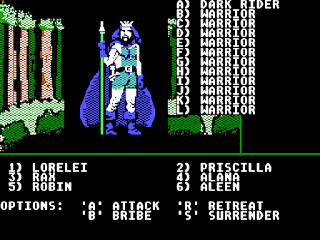 Developer: New World Computing, G-Amusements (NES)
Publisher: New World Computing, Sammy (NES)
Platform: Apple II, MS-DOS, Commodore 64, Mac, FM-7, PC-88, PC-98, MSX, PC Engine CD, X1, X68000, NES
Released: 1986, 1987, 1988, 1989, 1990, 1992
Recommended Version: I've only personally played the MS-DOS and NES versions.  The NES version, being a relatively late release for the system (1992) does have the benefit of nice graphics and music as well as a more polished UI.  However, it's a messy port in other ways, with some prominent bugs (like armor not seeming to actually work), which don't make it a version I recommend.
A useful mod for the game running in DOSBox is WhereAreWe, which features constantly-updated party information and automapping, as well as a number of cheat features that make the experience much less grindy.
Labels: ⭐⭐, 1988, Full Reviews
Newer Post Older Post Home