Soul Nomad and the World Eaters

Soul Nomad and the World Eaters is one of many strategy RPG titles produced by Nippon Ichi, and like most games they produce, it prides itself on having a vast amount of content, randomized dungeons and numerous endings to generate replay value.  But does its unique blend of gameplay elements prove to be a benefit or a detriment? 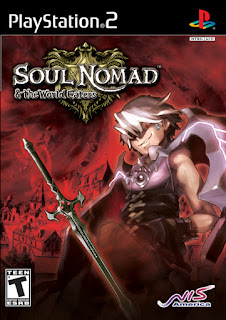 Nippon Ichi is a name well-known to fans of strategy RPGs, primarily for the Disgaea series; while relatively easy games to pick up and play, they are also deceptively deep, allowing for a huge amount of character and party customization and allowing the player to reach truly absurd levels of strength over the course of pursuing postgame content.  Later games in the serious also famously took advantage of this by amping up the power of the game's optional bosses to absurd extremes, giving them tens of millions of hit points, the ability to destroy one's base panel (preventing further units from entering the battle) and making them immune to particular abilities after being hit by it once, among other things.  Basically, they're games accessible for those just looking to experience the story, but have enough content to keep even the most die-hard of min-maxing stat grinders satisfied too.

Soul Nomad is another experimental outing for them, attempting to work in some elements of the Ogre Battle series into the mix.  One prominent example of this is that the player does not control individual units, but rather groups them into "rooms" of up to nine, with each unit automatically performing an ability depending on their position in the front, middle or back rows.  Generally, these are fairly common sense - melee characters do the best from the front rows, being able to take more damage and deal it in turn, while putting them in the middle row will cause them to do a weaker attack, while in the back row they may not even get to take an action at all.  Conversely, ranged units like archers and mages are better suited to being in the middle or back rows, where they can attack without readily putting themselves in danger.  Some units provide other interesting benefits from being in a particular row, though - for example, the Schemestress unit will prevent enemy counterattacks while in the center row, while back-row Bards will buff a random character's attack by 30% for that attack only.  Each group also gets as set of special attacks, referred to as "Tactics", depending upon who leads the squad - these can be used a set number of times per battle (increasing with levels) and often provide temporary buffs to that unit or allies, debuffs to enemy units, or just a single-use powerful attack combo (with animations of Nippon Ichi's trademark over-the-top style).

Because of this setup, combat and party equipment in the game is largely automated, so it's not quite as combo-oriented and satisfying as some of Nippon Ichi's other titles.  Terrain does factor in to battles as well, granting bonus and penalties depending on the terrain a clash takes place on.  Desert tiles, for example, grant a 20% penalty to all stats, while towns and castles will not only boost them, but cause units within them to heal HP every turn.  Basically, it really does feel less like a Nippon Ichi title and more akin to something like Ogre Battle or Advance Wars, which works both for and against it in different ways.

Perhaps as a result of these limitations imposed on individual units and their development, more emphasis is put on building and customizing your various team rooms; available slots and innate bonuses are randomly determined when they are created, and can easily be randomly "rerolled" via the Change command at the player's discretion until they get setups that they like.  As the game progresses, more rooms can be "locked", causing them to remain in place when the Change command is selected.  Rooms may also randomly contain "Bad vibes" - enemies that can be cleared out in battle to earn some extra items or power up your room.  Rooms can also be assigned items in the form of "Decors" that grant various benefits, like debuffing nearby enemies, boosting the squad's stats or giving them a bonus for a few turns, such as unlimited usage of skills.  Most of these aren't too great, particularly in the main campaign, but when one goes diving into random dungeons to upgrade their rooms and power up their units they can prove very useful.

As per usual for Nippon Ichi games, much emphasis is also put on replayability.  The main campaign itself has several opportunities to get a bad ending, though you are at least warned which options will bring you to one via a skull icon on the menu so you don't unintentionally lose your progress.  Numerous endings to the campaign exist, depending both upon the choice of your protagonist's gender and whom they build the closest relationship with over the course of the journey (with dialog choices and team attacks performed with them factoring in).  After finishing the campaign at least once, some interesting new mechanics unlock too - one has the ability to interact with villagers via certain items - beating them up for money, bribing them, or strangest of all, abducting them, which adds them to the party as a playable unit (generally with slightly higher stats than an unnamed generic unit).  Unusually at the time, the game also features an entire alternate campaign that can be experienced after completing the story once, having the player lead most of the campaign's villainous characters instead, which is quite a clever twist.  As per Nippon Ichi standards, the game doesn't skimp on cameos, either.  By completing certain optional events, the player can recruit not just a number of characters who surface in the main storyline, but guests from other games too, including  the long-suffering heroine Asagi (from the cancelled "Makai Wars") and even Lujei from GrimGrimoire.

In short, while it may not be the most highly-regarded Nippon Ichi title, it's certainly an interesting experiment by them, meshing the basic gameplay of games like Ogre Battle together with their usual brand of highly-randomized, stat-crunching design with plenty of secrets, alternate endings and intricacies to discover.  Even if that's not really your thing, though, the story and presentation is a definite highlight, foregoing the more light-hearted, cartoony feel of the Disgaea series for something significantly darker and more twisted in tone.  It wasn't one I was keen on revisiting much, but I certainly don't regret experiencing what Nippon Ichi's writers could do when they were trying for a bleaker tone and a heavier atmosphere than their usual norms.  Give it a try for that, at least, then come back for more if you enjoy the gameplay and want to hone your ragtag band into the deadliest army in the universe through weeks of random dungeon diving. 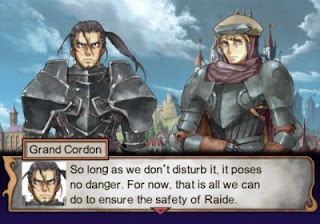 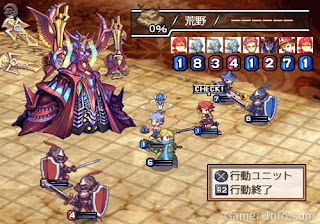