The Legend of Zelda: Skyward Sword

The first entry in the Zelda franchise crafted specifically for the Wii and its hardware, it is also regarded by a number of fans as one of the weakest games in the series.  But does Skyward Sword prove to be a enjoyable if flawed adventure, or is it really as much of a black sheep as many people claim? 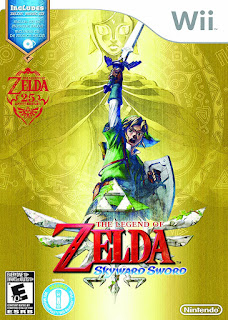 The Legend of Zelda: Twilight Princess was a game caught between generations.  Beginning development not long after the release of Wind Waker on the Gamecube, it saw numerous delays and setbacks, only finally being released in 2006 - at the dawn of Nintendo's next console, the Wii.  As a result of that, it was ported to both platforms, with the Wii version having motion controls pasted on top to take advantage of the platform's much-touted Wii Remote functionality.   Both versions of the game proved to be quite popular, though many were left wondering what a game built more fully around the motion control element would play like.

For better or worse, Skyward Sword set out to answer that question.  Being one of the handful of games to require the Wii Motion Plus peripheral, which provided a much tighter brand of motion controls than the standard controller could allow for, it really did incorporate that element into every facet of its design.  Sword-fighting, aiming one's bow, navigating menus, playing various minigames, and flying and swimming all incorporate the 1:1 movement from the Motion Plus into the game.  Some even take it slightly too literally, like having enemies whose shields can only be destroyed by slashing at them from specific angles (and frequently rotating them throughout the fight).

For the most part the Motion Plus controls do work relatively well, though it can be frustrating to get it to register exactly what it wants you to do at exactly the right moment; I recall more than a few instances of Link doing a straight-downward or straight-sideways slash rather than a diagonal one I was trying to perform, for example.  Navigating in 3D, particularly during the swimming segments, was also irritating, as the close-in camera and direct-aiming movement end up being more frustrating than intuitive, getting me snagged on walls frequently.  I also failed more than a few times at the roller-coaster minigame for the same reason - having to quickly switch between "left" and "right" with no tactile feedback or the convenience of quick button presses to do so sent me plunging to my doom constantly, and I eventually just gave up on it out of frustration.  Aiming in general was also a pain, particularly as the cursor frequently wanders out of the screen, forcing the player to re-center it by pressing Up on the D-pad.  I did adapt to it for the most part after a fair bit of trial and error, but I still couldn't shake the idea that motion controls aren't a good fit for an action-oriented game of this type (or at least, not for being used in every element of their design like this).

It's pretty hard to make a good impression with the rest of the game when fundamental elements like controls aren't nailed down, but Skyward Sword definitely tries its best to live up to Zelda standards.  In addition to swordplay, bombs and bows, there are quite a few creative new items to use too.  The whip is one of the more prominent ones - while it can be used in battle to defeat weaker foes and steal items from stronger ones, it sees quite a lot of use in puzzles too, doing things like flipping over platforms, swinging from branches or grabbing switches that are otherwise out of reach.  Digging mitts allow Link to burrow in sand and dirt to reach items, activate switches or break rocks.  The Beetle is a relatively creative one too - a travelling device steered by motion control that can grab distant items or activate switches, or even sever the stems of Deku enemies.  As per series standards, these all get put to quite a lot of creative use throughout the game and end up being really fun to play around with.  The dungeon designs are certainly up to series standards too for the most part, integrating the series' trademark quality puzzle design and having some very inventive elements to them.  My personal favorite being the ruins in Lanaryu Desert, where the player must activate "timeshift stones" to transform small areas of the dungeon back to their pristine, new state, but only as long as that stone remains in proximity to them; seeing these elements transform in real time as the stone travels past them is honestly really cool to see and makes it one of the most creative dungeons in the entire series.

Skyward Sword is also one of the first games in the series to heavily emphasize its crafting system.  Link can collect items from certain foes, plants and fauna to create potions with varying effects - not just a standard healing potion, but also some beneficial ones like Air Potions (which increase the amount of time Link can remain underwater) and Guardian Potions (which temporarily halve damage taken).  In addition, components can be used to upgrade almost every type of equipment at his disposal.  For example, the Slingshot can be upgraded to the Scattershot, letting it fire a handful of pellets at a time instead of just one.  The bow gets two upgrades that boost its power and range, while Link's shields can all be upgraded several times, granting more durability with each pass.  These ideas would later be more fully fleshed out in Breath of the Wild, but it is interesting to see them get their start here, if nothing else.

Some clever new twists on norms for the story appear too.  While Link remains a mostly-silent protagonist, it is nice to see him interacting on a personal level with characters in Skyloft, and even having a rival of sorts in Groose, who frequently antagonizes him in the early stages of the story but later becomes an ally.  Zelda herself plays a more active role in things too, undergoing her own journey concurrent to Link's instead of being a passive part in the story's events.  Being a prequel set before every other game in the series, it is also interesting to see where the story goes in absence of the series' iconic villain, Ganon, and how it ultimately ties itself into the later games and their iconic themes.

That stuff is all good and even treads some ground that prior games in the series didn't before, but other key elements of the design definitely feel lacking in comparison.  The world design in particular is underwhelming, with its areas generally feeling a lot smaller and more cramped than your average Zelda world, and many of them don't directly connect, instead only being accessible by going to the sky area and flying there. The sky-based exploration is also a bit of a letdown; there simply isn't a lot to do there that isn't strictly plot related, and it somehow feels even more barren than the overworld area in Ocarina of Time, which is not a good thing.  Many actions in the game, such as dashing and carrying things, are now tied to a stamina meter, which can get a bit annoying to deal with since in practice it mostly just forces you to stop and wait a few seconds, sometimes several times over, before you can complete whatever task you're trying to do.  The game also begins to feel padded, particularly toward the end; dungeon elements start to get recycled wholesale and you end up repeating the same overly long boss fight three times throughout the run, as if they just ran out of ideas for things to do but still had to meet a length quota.  There is also a well-documented bug in the game that can bar progress if you do things in a specific order, which required Nintendo to send a patched savefile to players (or, if that wasn't an option, simply restart the game), which is more than a bit odd for a company with such exacting quality standards in their products.

As with most of the Zelda games before it, Skyward Sword reinvents the aesthetics once more, with a brightly-colored visual style inspired by impressionist art.  There is a touch of cel-shading too, though it's nowhere near as overt Wind Waker's and almost very few instances of cartoonish slapstick are involved.  Characters are once again very expressive in their animations, lending a lot of personality despite the lack of voice-over, and bosses are, as ever, enormous and intimidating (with the notable exception of the Sealed Beast, which just looks and acts too goofy to take seriously).   Honestly, my only major complaint is that the whole thing hampered by the Wii's low resolution; this game would look absolutely gorgeous in HD, but when viewed through the port of the system's low resolution and grainy Component output, it definitely loses some of its magic.

So, is Skyward Sword really the worst Zelda game?  I don't think so.  It's definitely one of the series' more odd and experimental entries, with some of those elements definitely working in its favor.  I honestly enjoyed the motion-based combat once I adapted to it (though the focus on using the Motion Plus for literally everything else got old quickly) and the dungeons, puzzles, enemies, aesthetics and overall world-building remain as strong as ever.  However, many elements of Skyward Sword's design feel underdeveloped and/or underutilized, making it feel like it's simply not living up to its full potential, and that's a pretty grievous sin for a franchise that is almost uniformly praised for its games' immaculate quality.  What we get is far from a bad game, but one that could definitely benefit a lot from an HD upgrade and mechanical retooling along the lines of those received by other entries in the series. 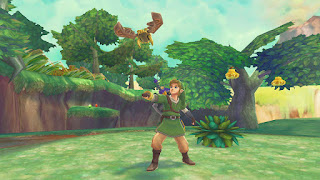 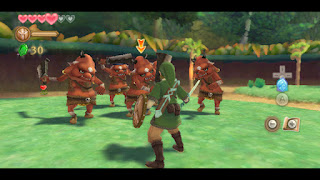 Developer: Nintendo EAD
Publisher: Nintendo
Platform: Wii, Switch
Released: 2011, 2021
Recommended Version: The Switch version retains the motion controls if you use the Joycons, but you also have the option to use the Pro Controller.  It's not without some odd choices, though - you swing your sword by flicking the right stick (with left-right-left or up-down-up inputs for spin attacks) and have to hold the L button to rotate the camera, which took me a bit to get used to.  Other improvements include running at a higher resolution and framerate (900p and 60 FPS), an autosave feature, skippable cutscenes and shorter tutorials, and the ability to use a special Amiibo to instantly transport between the sky and the surface (a controversial addition for sure).  Still, the Switch remaster is a major improvement over the original Wii version.