The Legend of Zelda: A Link Between Worlds

The Nintendo 3DS saw updated rereleases of Ocarina of Time and Majora's Mask, but A Link Between Worlds marked the first original outing for the series on the platform and was a throwback title in many ways, being very heavily based on Link to the Past.  But does it prove to be another worthwhile title in the Zelda line, or is it just one you can safely avoid? 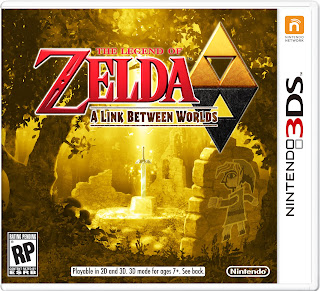 The Nintendo DS is a highly-acclaimed system among fans, but its shortcomings were evident right out of the gate; lacking any kind of analog control hampered the port of Super Mario 64 on the console, forcing gamers to make do with either the D-pad and a run button or just the clumsy method of trying to utilize the touch-screen for movement in 3D space; neither of which was particularly great.  The Zelda games on the platform were similarly hampered, relying instead on stylus-based movement and mechanics; while it worked considerably better there considering the top-down viewpoint those games utilized for the most part, it still left most people wanting for a more traditional setup.

Fortunately, the 3DS addressed this flaw straight away, giving players an analog stick to utilize that would allow for some more seamless ports of the two Nintendo 64 Zeldas (both with a plethora of added features), as well as some new games in the series that could make full use of the system's features.  A Link Between Worlds was the first of the new Zelda games on the platform, and it went in hard trying to appeal to long-time series fans, bringing the overall world design and aesthetic of Link to the Past to a 3D engine (in fact, in Japan, it was billed as a direct sequel to that game, having the subtitle title "Triforce of the Gods 2" in reference that region's title).  This may have felt a bit pandery to some, but as LTTP is one of my favorite games of all I time, I certainly wasn't going to complain.

I'm certainly happy with the way it was handled, too.  While the overall feel and layout is similar (retaining almost all of the dungeons and respective themes as well), a lot was done to make Link Between Worlds a distinct game in its own right.  The most prominent of these is a new gameplay element that allows Link to flatten himself against a wall, becoming a 2D art piece that can move horizontally across unbroken surfaces; this proves to be a clever mechanic as it lets you reach new areas, evade attacks or sneak up on some foes to hit them from behind, as well as seeing integration into many of the game's puzzles.

The game's structure is also heavily reworked; in fact, unlike Link to the Past, it's almost an entirely non-linear experience, letting you visit virtually any place in both the light and dark worlds (here rebranded "Hyrule" and "Lorule") at your leisure and complete dungeons in almost any order.  Fitting this, dungeons have a relatively "item-neutral" philosophy of design, requiring few (or no) special pieces of equipment to complete them.  Similarly, dungeon treasures are relatively limited, mostly just being varying quantities of Rupees; key items are instead acquired at a central shop from Ravio, where one can pay a small amount of Rupees to "rent" them (which causes them to be taken away if Link dies), or pay a larger sum in order to keep them permanently.

Items are similarly reworked as well.  While several series staples remains (Bombs, Bow, Boomerang, bottles for carrying various potions and items), a couple new ones appear as well.  The Sand rod lets Link create raised platforms on any sandy surface, while the Tornado rod will launch Link into the air, letting him reach higher platforms and stun nearby enemies.  Nearly every item now also has a "Nice" variation, generally granting more powerful effects, that can be unlocked by finding "Maiamais" and bringing them to Mother Maiamai.  This can make some mundane items into surprisingly deadly weapons; the Lantern, for example, the Nice Boomerang grants increased throwing range and speed, and up to three can be thrown at a time.  Perhaps as a suble nod to Link to the Past, where the bug net could be used to deadly effect against Agahnim, the Super Net also deals eight times the damage it normally would, making it into a deadly weapon.  These upgrades aren't always necessary or particularly practical, but they are a always a good bit of amusement, making it worth finding all the Maiamais to try them out.

Most bosses in the game are recognizable parallels Link to the Past counterparts, but like everything else in the game, have been reworked to utilize the new mechanics and items.  A few entirely new ones appear as well, like Margomill and Zaganaga, while others are a creative fusion of two familiar series enemies; one prominent example being "Knucklemaster", a fusion between the Wallmaster enemy and the Iron Knuckle.  As per usual for the series, bosses are less about raw combat and more about pattern recognition - finding a means to expose the bosses' weakness and exploit it, which oftentimes requires creative use of your items.

So, is A Link Between Worlds another worthy Zelda game?  I certainly won't argue that it's not.  While it is very obviously based upon a fan favorite game (and even billed as a direct sequel to it in Japan), it does a lot to change things up; dungeons are familiar but remixed enough to keep things fresh, items gets some creative new uses and upgrades, and the overall non-linear design make it an experience you can experiment and play around with at your leisure.  That design decision all but ensured it would be compared to its predecessor (often unfavorably), but I certainly don't regret purchasing and playing through it, as I had a blast every step of the way. 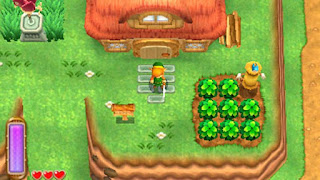 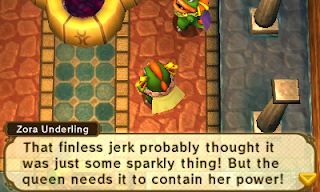