A late-comer to the PS1 RPG scene, Saiyuki: Journey West is a loose adaptation of Journey to the West with some interesting mechanics and tactical turn-based gameplay.  But does it prove to be a worthy adventure despite being late to the party, or was this one largely overlooked for good reason? 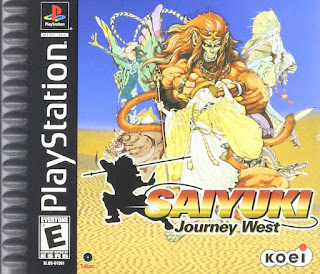 Koei is mostly known in the west for two things - incredibly deep strategy-simulation games like Romance of the Three Kingdoms, Gemfire and Liberty or Death, and of course the Dynasty Warriors franchise - over-the-top beat-em-ups based on wars in ancient China that have also been licensed out to just about every popular media franchise there is.  Both are niche games and often attract controversy for having relatively few significant changes between entries, but they nonetheless remain strong sellers and show no sign of stopping anytime soon.

Less known about them, however, is that they actually have a fairly sizable presence in the RPG world.  Probably their best known division in the west is Gust, known for creating the Atelier series, a franchise which places heavy emphasis on item crafting.  However, their presence in the genre goes back much further - all the way back to their founding in 1978, where they published obscure games for Japanese computers like The Dragon & Princess.  They also produced the Uncharted Waters games on various platforms in the 90s, which have gone on to become cult classics.

Before Gust became a prominent name, though, Koei tried out a few other attempts at role-playing games in the west, none of which really caught on.  Saiyuki: Journey West was one of those, seemingly built to cash on on the craze of anime-influenced turn-based strategy RPGs like Final Fantasy Tactics and Ogre Battle, but it never quite caught on, probably in no small part due to being released in 2001 - a time when the Playstation 2, Gamecube and XBox were all freshly released and making waves across the world.

The few that did play it, though, found a pretty solid game.  While not quite as in-depth as others in the genre, nor as highly-produced as games like Final Fantasy, it provided a solid turn-based experience that was easy to pick up and play, yet surprisingly challenging to master.  Based on the classic Chinese tale "Journey to the West", though of course creative liberties are taken in the name of gameplay and story.

One significant example of this is in the game's playable characters.  Each of the playable cast is aligned with one of the five Chinese elements - Fire, Water, Earth, Gold (Metal) and Life (Wood), getting bonuses when utilizing or resisting spells of their particular element and worse effects with the opposing element.  Many of the characters utilize their trademark abilities from the story - Son Goku can utilize a cloud to get more movement range in a turn, for example.

Every character except Sanzo also has a "Were" ability, essentially letting them transform into a huge, powerful beast for a limited time and unlocking the majority of their special abilities.  They do tend to be overwhelmingly powerful (having hundreds more HP than the characters' base form), but to make up for this, they are also very limited for much of the game.  All of these are tied to a "Were meter" on the screen that is depleted each time a Were character utilizes a specific move - simply transforming into one takes one pip, a normal attack takes one, while some special attacks can take multiple pips at once.  Once the gauge empties, all Were-form characters immediately revert to their base forms.  The bar itself can be leveled up through battles, earning more experience and levels (and therefore pips) the quicker a player clears battles.  It's a surprisingly well-integrated mechanic, too - most battles in the game are very difficult without well-placed special moves by one or two Wered characters, so balancing their use and clearing boards quickly is key to long-term success.

Sanzo himself has no such ability, though, and for a significant portion of the early game isn't really able to do much in comparison - just use a heal attack or deal mediocre damage with his staff, and you only really want to do the latter in a pinch as his defeat means an instant game over.  However, he does come into his own after some time; his high Magic stat makes him an effective caster once you start finding scrolls to cast from, and as the story progresses he will acquire "Guardians", summonable allies that will grant benefits to the entire party for a few turns and Sanzo a special, 0-MP spell for the duration.  For example, summoning Mother will grant the entire party HP regeneration for a few turns, while calling Fool will boost their attack power and grant Senzo the 0-MP FlameWhip attack.  Each new Guardian acquired will also bolster the innate Attack stat of his staff - important as his weapon is the only one that cannot be improved at a blacksmith.

Because of the game's linear setup, it can be tricky to manage one's party and keep them all up to speed, making some later battles very difficult if not impossible to overcome if you simply truck on.  For this reason, it's often a good idea to visit Dojos, where the party can train to power up without restriction.  Extra money can be earned by taking on sidequests at the "Post", and if you're in more of a gambling mood, one can play an optional card game (simply referred to as "Card Game") to earn some rare prizes - usually in the form of equipment that can't be gotten elsewhere.  The game itself plays similarly to the traditional Japanese card game Oicho-Kabu, so reading up on that will prove beneficial if it's something you plan to spend any amount of time on.

Looking up forgotten RPGs from yesteryear is always a gamble; whether it's forgotten for good reason or simply an overlooked gem is something you can only truly find out by playing it yourself, and that's sometimes an expensive endeavor.  That said, I found Saiyuki: Journey West to be a surprisingly good time.  It's not the PS1's most immaculately-produced RPG and its late release ensured that not too many people would play it even if it was, but it's a solidly-made and entertaining game for strategy RPG fans.  It is somewhat hard to come by these days in physical form, but is available as a downloadable title on the Playstation Network (playable on Vita, PSP and PS3), so those who only have a few bucks to spare can give it a try too. 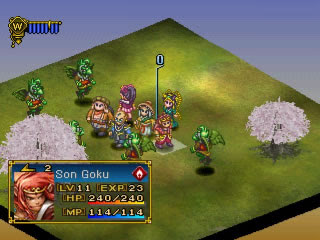 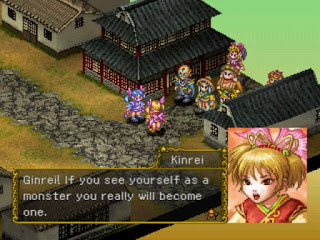