One Step From Eden

An action-roguelike with combat and deck building inspired by the long-dormant Mega Man: Battle Network series, One Step From Eden has gotten a lot of acclaim in the short while since its release.  But is this another worthy one for fans of short-but-tough games, or is it one they can pass up? 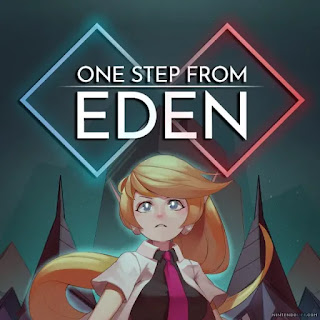 Roguelikes are of course primarily associated with classic PC gaming, with numerous genre classics like Beneath Apple Manor, Nethack and the eponymous Rogue being highly acclaimed even now, decades after their release.  They never quite had the same presence on consoles, though, mostly being relegated to cult classic status or mixing in action elements to make them more accessible to fans on those platforms, with a few of those going on to become cult hits in their own respect (Binding of Isaac being a prominent example).

One Step From Eden is another action-oriented roguelike, this time also working in elements of another cult favorite series, the Mega Man: Battle Network franchise.  Getting its start in the early 2000s for the Game Boy Advance and spawning six total games before being getting a sequel series in StarForce (which spawned three more games), it was quite a popular series for a while.  It wasn't hard to see why, either - the basic premise of Mega Man was present, having you battle a plethora of creative bosses and foesm but it was put into an RPG-like format centered on a deck-building element.  You would build a deck of one-use weapons (referred to as "chips") and have a few of them randomly given to you each turn, utilizing them to clear a 3x6 grid of enemies while evading their attacks.  Winning battles, as well as completing story events, would give you more chips to choose from, as well as allowing you to purchase character upgrades to make later challenges easier to tackle.  Another interesting element is that you have the option to spare defeated bosses, which causes them to heal some of your HP and occasionally show up to assist in later battles; killing them, on the other hand, may cause them to drop rarer spells or artifacts, so it's another tactical decision to be made in the course of any given run.

Much of that remains present in One Step From Eden, though there is more strategy required here too owing to the setup.  The grid is expanded to a 4x8 one, allowing you a bit more freedom of movement, and the challenges you face in each stage vary.  Some stages may have you defend hostages for extra rewards or free healing (a valuable resource in any roguelike), some may contain a chest that will vanish after a short while but will award an item when broken open in time, and others may contain hazards that hinder your effort to clear the board, like a missile launch that will deal massive damage to everything on the board after 30 seconds have passed or a volcano randomly setting tiles ablaze.  Finding a camp will allow you some free HP recovery, while visiting a shop lets you trade money for new spells, make "pacts" that put you at a disadvantage for a few battles in exchange for some kind of reward, or purchase upgrades for existing spells.

Spells serve as the equivalent to Battle Network's Chips, and each character begins with a small handful, gradually gaining more as the adventure progresses.  Spells all run off of "Mana", a continually-regenerating meter at the bottom of the screen, with their costs varying based on a number of factors.  Each time the player runs through all of the spells in their 'deck', they will have to wait a short while for the deck to be "Shuffled", refereshing all of their used spells so that they can be used again.  Spells can be purchased from shops or awarded by completing special events, though the overwhelming majority are simply rewards from battles - every battle will give you a pick of three, letting you select one (or none if you choose).  The deck size itself has no real upper limit, though having too few or too many spells can be detrimental - too many will make it hard to get a particular spell the player may need in a pinch, while having too few can constantly force you into shuffle, leaving you helpless for long periods.  Forging a good balance is key, as is picking up cards that further a particular strategy and ditching any that don't.

Spells often have secondary effects which can aid or hinder the player, which may affect the player's choice in wanting them in their deck.  For example, some add temporary "Jam" spells to the player's deck, which have no effect, effectively making it harder to get a spell they want at a particular time.  (However, Jam spells can be upgraded with Artifacts, making Jam spells useful if the player manages to get some of those).  Flow spells add Flow counters to the player, and will get additional effects if the player casts them while they have Flow counters, such as faster mana regeneration or getting an additonal spell cast at no cost.  Similar to those, Trinity spells will add Trinity counters, with special effects activating once they have three Trinity counters - usually casting a more powerful spell instead, or casting a spell twice for the price of one cast.  Others can leave behind mines, fire or spikes on tiles that damage anyone passing through, crack tiles (making them temporarily impassable), or have additional effects like rooting the player in place for a short while, applying Fragile counters (causing the player or enemy to take extra damage from the next attack they receive), or rooting the target in place momentarily if they hit.  Many of these effects can also be applied randomly to spells; both those found randomly as rewards and those the player chooses to upgrade at shops.

Artifacts are another major element of strategy in the game, and are received as rewards for completing challenges or defeating bosses.  These serve as "armor" and "accessories", usually granting upgrades to the player with few or no drawbacks.  Granting the player seven seconds of invincibility at the start of a battle, giving all enemies Fragile counters at the start of battle, granting a small chance to follow up any spell the player casts with an additional effect, and so forth.  It can be difficult to get a particular one you want owing to the highly random nature of the game, but as few of them have major downsides, they're often worth taking regardless.

Of course, no roguelike game would be complete without unlockables, and One Step From Eden certainly has no shortage of those.  At first you only have one character to play as, but playing the game will unlock more spells, artifacts and playable characters to make later runs with.  The bosses in the game all double as unlockable characters, and each character also has several different variants to play with, allowing for a wide variety of different strategies.  Most characters also have unique weapons they can utilize at any time and may have unique artifacts as well, giving them all a very distinct feel.  For example, Saffron's default variant gets a weak but rapid-firing gun with no mana cost, affording her an attack option even with no spells ready to cast, while Reva is a more defensive character, utilizing her unique Eschaton Artifact to generate shields each time she moves and her Reflector Gem weapon to bounce enemy attacks back at them.

In the end, I was surprised at how fun and addictive One Step From Eden really is.  It's easy enough to pick up and play, but deceptively deep, with a lot of mechanics to weigh and challenge in building the best deck and character loadout you can with whatever options you're given at a particular moment.  It gets very tough as the game goes on, too - you really do have to stay on your toes, learn to recognize and counter enemies and their patterns, and make the most of every ability your character has in their arsenal if you want to survive all the way to the end.  Still, like any good roguelike, it never feels "cheap" or unfair, and because of that you keep coming back again and again for "just one more try" before you realize that it's 2 AM and you've got work the next morning.  Great game, and easily one of my favorites of 2020 thus far. 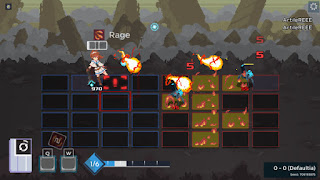 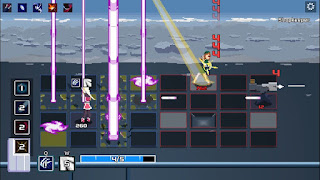