The first Might and Magic proved to be a major success for New World Computing, so naturally, a sequel was inevitable to cash in on its popularity.  But does the second game in the series improve on what its predecessor set forth, or is this just a sequel to be forgotten? 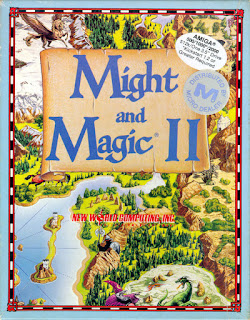 Might and Magic wowed audiences in 1986 with its vast world to explore, a narrative that unfolded more like solving a complex puzzle than following a long story, and of course for its gameplay, taking the formula of Wizardry and several other D&D-likes and making it considerably more accessible without sacrificing the challenge.  It ultimately sold over 100,000 copies across all platforms, prompting Jon Van Canegham to create a sequel.

The two-year gap between games is certainly evident at just a glance.  Might and Magic 2 has seen a drastic visual overhaul, going from 4-color CGA to 16-color EGA visuals and featuring much more animation on the whole - particularly in battle, where enemy sprites are now displayed onscreen throughout and animate, making the game feel much more alive in general.  Environments are varied and beautifully detailed, there is a visible day/night cycle now, and things only portrayed in text before like shopkeepers, NPCs and exit doors are now visible on the game screen too.  Basically, the whole world of Might and Magic 2 feels much more like, well, a world, rather than just a big maze.

Several other gameplay tweaks are included too, seemingly drawing inspiration from games like Bard's Tale and Wasteland.  In addition to the six classes from the first, two new ones are added - the Barbarian, who has more limited equipment choices than a Knight but greater HP growth, and
the Ninja - a class that requires high stats across the board but can open locks and disarm traps like a thief and Assassinate enemies for high damage.  In addition to the standard six-character party, the player can recruit two more characters along the course of the adventure, bringing their total group size up to 8.  While the game does retain a first-person viewpoint, it does now also contain a mini-map feature of sorts - certain spells and skills will let the player see their surroundings from a top-down perspective, making it easier to navigate without having to draw your own maps or look them up.  Once a player has the Cartography skill, they will also find that that the game does have a full-blown mapping feature as well, visible via a first level Sorcerer spell.  Expanding on ideas from the first, some areas can also be entered only by certain classes, requiring the player to use more than just six characters throughout the game.

Skills are another new addition to the game.  By paying money to certain trainers, characters can learn up to two skills, which will then be improved through subsequent use.  Some just bolster stats, while others factor into the gameplay in a number of ways.  Linguist lets you read messages you wouldn't be able to normally, for example, while Mountaineer allows the party to climb over mountains if at least two people have it.  Similarly, Pathfinder lets the party move through any forest tile if two characters have it.  Interestingly, one must have a skill (Crusader) to undertake quests as well, and each class also has a unique quest to undertake over the course of the game, so the game lets you personalize not just your party, but your overall experience.

Enemy variety is once again vast, with over 200 different types throughout, enemy parties that can number well over a hundred, some enemies dealing thousands of damage a hit, and most having their own special abilities.  Some of these are fairly mundane, like enemies cursing the party to make themselves harder to hit, while others are clever yet very irritating.  One example of this is Jugglers, who randomly rearrange the party, potentially exposing your weaker back-row characters to danger.  Thankfully, the party's repertoire of spells has been upgraded to match, with a lot of the crappy spells from the first game exhumed in favor of more useful ones, as well as moving essential utility spells like Power Cure (cures most negative statuses) and Resist Elements to lower levels to make them available sooner.

Also tweaked upward to match the hordes of enemies are the party's stats, with maximum level now being 255, stats being able to reach 255, hit points up to 65,535 and magic up to 9,999.  Essentially, your starting stats are pretty meaningless in the long run, only really being used to determine which class you begin the game as; the rest will inevitably reach colossal heights before the end as you visit the circus (a yearly event), gain bonuses from dungeon events and earn power boosts by completing quests.  Fitting this, most of your spells will scale up in power (and cost) with your character's level, allowing for some truly absurd damage totals by the end.  Equipment costs and enchantments are equally out there, with some pieces of gear costing literal millions of gold and enchantments being able to reach +63 (boostable by a ninth-level Wizard spell).  Potions and equipment give massive stats too - temporary boosts of 500+ HP, five levels, 50+ points in a given stat, and all of them are stackable as well, allowing you to overcome battles that would otherwise require hours or even days of grinding.  There are even a handful of "Uber-boss" enemies that can only be bested if you have each character 's stats boosted to ridiculous heights, making it feel like a Nippon Ichi title in some respects. he only thing that really remains grounded in anything resembling realism is your characters' age, which will cause your stats to weaken once you reach age 75 and give you a chance to die in your sleep; as in the first game, though, it can be reversed a few years at a time via spells or by finding a "fountain of youth".  This all helps give the game a much greater sense of power progression compared to the first, where your stats remained relatively static throughout the game and thus necessitated much more grinding.

So, does Might and Magic 2 prove to be a worthy sequel?  Well, I'd say so just based on the visuals, as the game now feels more like a properly fleshed out fantasy world and much less like a giant maze full of cardboard-cutout monsters.  Its gameplay goes more than a bit into the absurd with its massive numeric totals, but I do think that adds to the charm; there's a certain primal fun in taking on a horde of 200+ goblins and coming out victorious when, hours back, just a fraction of that number gave you so much trouble; to say nothing of taking on giants, elementals and other beasties who deal damage well into the thousands of points.  The new elements like hirelings, new classes and skills add quite a bit to the experience too, and the fact that you can import your party from the first game and watch them go from mundane D&D-level characters to unstoppable titans is a thrill in itself.   The puzzle-oriented quests remain, though, so this isn't a game you can simply power-level and get through - there is still a significant cerebral element to its design.  A worthy followup to a solid RPG. 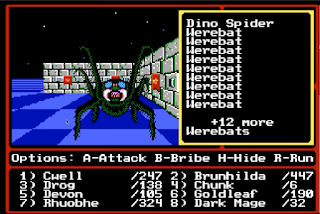 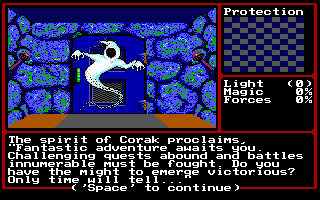