After two low-key cult classics on the SNES, Breath of Fire, like many other Capcom franchises, made the jump to the Playstation platform in 1998.  But does it provide enough of the series' unique charm to help it stand out in a sea of other huge RPG names, or does it just get pushed into the background and forgotten once again? 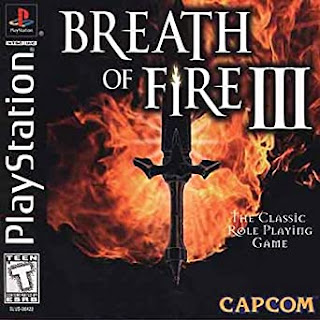 Breath of Fire as a series has always had a dedicated following for its traditional yet imaginative design, but unfortunately that never really translated into raw sales.  Developers for the series have even gone on record as saying that while they enjoyed making the games and they've almost always gotten a positive reception, they've also never really been profitable for Capcom; hence why the franchise has been virtually unheard of since the turn of the millennium.  Probably the closest it ever came to mainstream success was in the Playstation era, where it was among many RPGs to ride the genre's newfound wave of popularity kickstarted by Final Fantasy VII.

Sure enough, Breath of Fire III's first outing on the system really strove to set itself apart from its 16-bit counterparts in a number of ways.  While still set in the same world as the first two games and retaining many of its key themes, the game saw a definite visual upgrade, utilizing an isometric perspective with 2D sprites on 3D-rendered backgrounds, and quite a lot of animations for each of its characters - Ryu in particular has a nice touch in that he gradually grows more confident over the course of the adventure, starting with a weak failing sword swing and gradually moving his way up to becoming a real swordsman after some story beats.   Surprisingly, it also did not utilize a separate "combat screen", instead having the map screen shift slightly with all of the players' characters and enemies becoming visible on the map itself, making the game feel a bit more realistic and immersive.  It did of course play a bit more slowly than the first two games, with noticeable loading times for many special moves and transitions to and from combat, as well as a frequent encounter rate in general; not the worst example of such in this era of gaming, but it definitely feels slower than many other RPGs on the platform.

Breath of Fire always sold itself on having a distinct and memorable cast of characters and abilities thereof, and 3 certainly is no different there.  Each character has their own ability that are used in various puzzles and opening hidden paths.  Rei can pick open locks, for example, while Garr, being by far the largest character, can push heavy objects the others cannot.  Each also plays very differently in combat, getting a variety of spells and vastly different stats; for example, Momo has a powerful bazooka weapon, but it tends to miss a lot, so equipping her with items to boost her accuracy is generally a good idea.  Rei is speedy but not particularly strong, while Ryu is a well-balanced character physically but has relatively low MP.  Throughout the game, one can offset many of these weaknesses (or accent a character's strengths) by training under a Master.  Masters are found throughout the game and will influence your characters' stats as they level up, and can even grant some extra abilities they wouldn't learn normally; using them wisely throughout your journey is key to success, especially early on.

Another interesting addition are "Skills".  Essentially, these work like blue magic or Enemy Skills in the Final Fantasy series, allowing you to learn moves when you're hit by them while using the Defend command.  Also like blue magic, many of these skills are built on specific stipulations like dealing more damage to specific enemy types or having extra effects based on the user's stats (such as having damage based on the Agility stat, rather than Strength).  A lot of these end up being surprisingly useful, so it's worth it to feel out what new enemy types can do (and take the occasional turn to defend so that you can attempt to learn their skills for yourself) rather than mindlessly blasting through everything in your path.

Another iconic element of the series - Ryu's dragon morphs - returns as well, and like many other things in the game, it has seen a substantial overhaul and puts emphasis on player customization (perhaps an apology for the very watered-down version from Breath of Fire 2).  Throughout the game, one will find a plethora of "Dragon Genes".   Up to three of these can be mixed and matched when the Morph command is used, and the result will be a dragon with the properties of all three.  Some affect stats, generally raising some while lowering others, while some change the dragon's elemental property to one of the five elements in the game (Fire, Ice, Electricity, Shadow, Light).  Certain combinations will also unlock larger and more powerful forms that get big-time stat multipliers, so it's well worth it to experiment with combinations of genes throughout the game.  Interestingly, one gene in particular (the Fusion gene) even retains some elements of the Fusion mechanic from the first Breath of Fire, allowing Ryu to combine with one or more party members to create a powerful new hybrid form.  This definitely ends up being one of the game's most interesting mechanics due to the sheer number of forms you can create, and as mentioned, it's a massive improvement over the first game and especially the second's dragon mechanics.

Of course, Breath of Fire III also doesn't skimp on side-content.  A small management sim exists in the game in the form the Faerie Village, where the player can assign tasks to faeries in order to influence the growth of their town, unlocking benefits like shops that stock rare items, minigames and a sound test.  Fishing returns as well, letting the player catch fish that have a number of different effects, as well as tracking the largest of any given type they've caught.  Saving outside of towns is now possible too via the "Camp" option, which opens up a screen allowing the player to interact with party members and rest at their leisure.
The game does have some glaring weaknesses, though.  The soundtrack is one; it's not painful to listen to by any means, but it feels bizarrely out of place - less like something you'd hear in an epic world-spanning fantasy RPG and more like something out of a Windows 95 desktop game.  The whole time I played my mind went racing back to various casino/card games I played on my PC in the '90s, and a few tracks in particular sound like they'd be more at home in a casual "software toy" game like Simcity or SimAnt.  A definite contrast to the first two, especially the hard-rock sound that Breath of Fire II brought to the table.  Still, it doesn't ever ruin the mood, so I can't say it's a serious flaw - just a very bizarre choice.
More serious problems fall on the game's overall pacing and generally asinine design elements.  The game feels oddly restrictive at times, roping you from one locale to the next with no real opportunity to break away and explore freely - not really a good thing with the aforementioned Master system and you wanting to maximize your characters' abilities.  Dungeons get very tedious before long owing to the frequent encounter rate and significant loading associated with attack animations.  You're also presented with a lot of instances of just having to stop and talk to everyone and search everything before you're allowed to progress, and even then, if you don't have the right character in your party you may not be able to - you'll have to exit town, swap them in, then come back to advance.  Minigames - none particularly fun other than fishing - also pervade the experience and are often necessary to progress, with two in particular being especially annoying - having to time a button press to the exact moment a meter peaks (slightly off and you waste an item; run out and you have to go back to town to buy more) and a particularly irritating rope-pulling minigame where you have to mash a button when prompted and stop exactly when told; one mistake on your part (or your computer controlled partner's part) and you get to restart the whole thing.  They clearly wanted to take a page from Final Fantasy VII here, and while FF7's minigames generally weren't amazing, they at least weren't aggravating to endure like these.

Breath of Fire III was the game that put the series on the map for most fans, and I can certainly see why.  It brought the franchise into a new console generation in style, keeping its interesting mechanics, characters and overall setting intact while taking advantage of the extra CD space to provide a good-looking game with some innovative elements.  Being able to customize one's party via Masters, Skill learning and a huge pool of Dragon morphs are pretty cool innovations, while its story and a plethora of hidden secrets and optional content keep die-hard players coming back for more.  It was one of many RPG franchises playing second fiddle to the juggernaut that was Square, but that didn't stop Breath of Fire III from doing its best to stand out.  Or being the only game in the series to get a port to the PSP platform years later.  It's got some uneven difficulty and pacing problems and its overall slower, more methodical design makes it feel a bit more dated than most prominent PS1 RPGs, but an interesting piece of history nonetheless; worth a look if you can track it down. 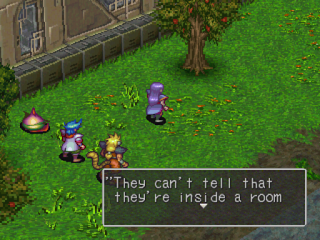 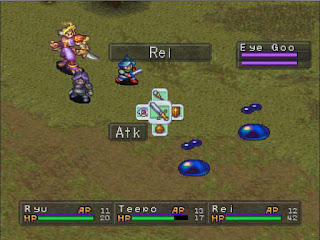 Developer: Capcom
Publisher: Capcom, Infogrames
Platform: Playstation 1, Playstation Portable, PSN
Released: 1998, 2006, 2016
Recommended Version: Both the PS1 and PSP versions seem to be more or less the same, though the latter is presented in a wider aspect ratio and has slightly tuned up visuals to match the more powerful hardware of the platform, though the tradeoff is slightly longer load times.  The PSP version also seems to have slightly higher odds for luck-based elements (stealing, learning skills, etc), but this may just be luck on my part.  The PSN version is a port of the PSP version.
Labels: ⭐½, 🎣, 1998, Full Reviews
Newer Post Older Post Home