The third game in the Wild Arms franchise and the first to hit the Playstation 2, it is also considered to be the best in the series by many fans.  But does it hold up to closer scrutiny today, or is it just a by-the-book entry and little else? 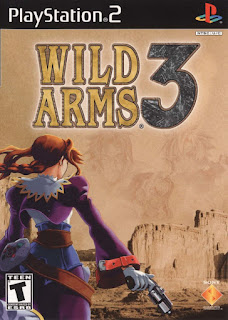 Wild Arms was a cult classic while 2 came out fairly late in the Playstation's life and proved to be a pretty good seller despite its relative unpopularity among fans of the first, so naturally, the series would soon make the leap to the Playstation 2.  2002 brought us Wild Arms 3, which kept most of the core feel of the series intact while taking advantage of the platform's capabilities to deliver a stronger aesthetic experience - stylized cel-shaded graphics, virtually no load times and a much smoother framerate than even 2 are immediately put on display.  Combat tries to be more visually interesting too, having friend and foe alike roam the field between actions (though as far as I can tell, this is purely a visual effect and doesn't play into the overall strategy at all).   But more than that, the game has much more of an "old west" feel than the earlier games.  The music, dusty desert setting, riding horses to quickly travel around the world map and character designs all fit this well, but it's also quite prominent in the intro, depicting a Mexican standoff between the four protagonists as a clever in-road to their introductory quests (which all explain what led them to that moment).

This is evident in the gameplay too, which puts much more emphasis on ARMs than the previous ones.  Each character has their own weapon - Virginia gets a pair of revolvers, Jet gets a machine gun that fires in six-shot bursts, Clive gets a powerful rifle that can only hold two shots by default, while Gallows gets a double-barreled shotgun.  Ammo management is a significant part of one's strategy as each normal attack consume ARM ammo; after you spend all of a weapon's shots they resort to a much weaker melee attack.  By using the Guard command you can reload your gun mid-fight, and many of the Force abilities are centered on gun use too - usually firing numerous rounds in a single turn for extra damage but burning your ammo more quickly.  Magic is also not limited to specific characters anymore, but now based on finding and equipping "Mediums" with predetermined stat bonuses and spell lists, slightly similar to the Materia system from Final Fantasy VII.

Another odd, but welcome mechanic is Inertia Cancel.  Once someone has at least 25 FP in their Force gauge, they have the option to cancel their action for a turn by spending 25 FP and can immediately input another one.  This does prove more handy than you'd think - for example, if another character gets taken out by an enemy before someone can heal them, they can Inertial Cancel that action and use a Revive Fruit instead, getting them back in the fight while avoiding wasting a Heal Berry.  Another option is to have someone use a Carrot to boost another character's FP, then cancel that character's action and have them use a Summon or other powerful attack instead of a weaker one.  Basically, meter management is a very important skill to master so you can get the most out of your resources.  One can also find an ability later in the game to "Power Cancel", which reduces the FP cost of Inertia Cancelling to 0 and opens up a whole new world of fun tactics.

Wild Arms 3 also compounds the "Wild West" feel by putting much more emphasis on exploration (requiring you to buy maps and follow clues to discover new areas on the world map), as well as conservation of resources.  HP-restoring items are not found in most shops and are relatively hard to come by in the wild, and upgrades are simply limited to boosting your ARMs' stats and character skills - there is no 'armor' per se.  Additionally, many rare and useful personal skill items can only be found in bulk by first finding one and selling it to the "Black Market", and even then, purchasing more is generally quite expensive (tens of thousands of Gella apiece).  The game does take a novel approach to the healing item conundrum, though - a major minigame is buying seeds and then tending to a garden to grow your own healing items.  Some items also have a very small chance of being successfully grown, which means you will have to "Breed" some crops to give them better chances to cultivate.  Eventually you can get all of them to 100% (and there is a special reward for doing so), though this takes quite a bit of work over the course of the game.

Because of this, the game does give you some options to conserve your health and be less reliant on healing items.  Each character now has a vitality gauge; after each battle, this gauge will be depleted to restore their HP, with every 1% of the meter restoring that amount of their health.  Resting at an inn will restore the bar to full, while picking up orange gems in a dungeon will restore it by 5% for each gem, so it is important to focus on making progress in a relatively efficient fashion.  Encounter cancelling returns from Wild Arms 2 as well, though in a slightly more limited form - this now operates off a gauge of its own, which begins at 10 and depletes by one point for each encounter you skip (and can be refilled by one point for each battle you fight or each white gem you collect).  However, if your level is far above that of an enemy, you'll get a green exclamation point warning instead of a white one, which lets you skip that battle at no cost to the gauge.  Another small exploit I found is that one can quickly interact with some objects (like throwable crates) or exit the room to avoid a fight without spending any of the meter, so that can also help you to keep points in the gauge.  Gimel Coins - used for retrying battle - now have a secondary purpose as well, letting you save your prograss at any time instead of just at a pretermined save point, which can prove quite useful in the tougher areas of the game.

In short, Wild Arms 3 was a game that retained the same turn-based, puzzle-solving design of its predecessors, but also did its best to make it feel more like you were exploring a harsh and unforgiving frontier.  With a heavier emphasis on resource conservation than the earlier games, as well as introducing concepts like ammo and careful Force meter management to combat strategy, Wild Arms 3 was definitely the most challenging of the Wild Arms games in its time, which probably played no small part in making it a popular entry among fans.  Whether it's the best in the entire series or not is certainly up to debate, but if you enjoyed either of the first two games, it's another one you'll definitely want to play. 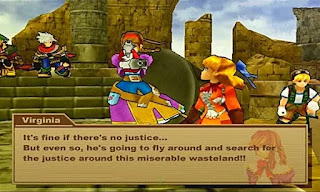 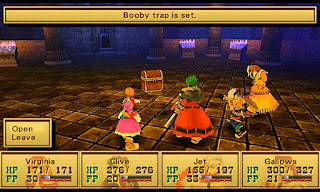