Wild Arms 2 came out three years after the first, expanding on the elements it established in just about every way it could.  But does it prove to be a worthwhile sequel, or just a disappointing followup to a cult classic? 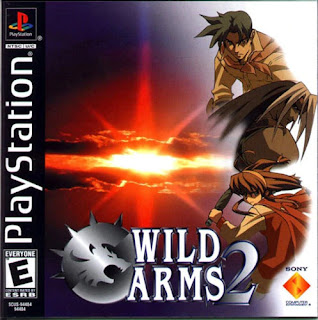 Wild Arms was a well-regarded early RPG for the Playstation, though it quickly faded from the limelight once Final Fantasy VII arrived and took the world by storm.  Wild Arms 2 was released at the height of Square and the Playstation 1's popularity and found itself struggling for attention among a sea of other high-profile RPG releases, which probably didn't do it any favors when it had a more traditional, 16-bit feel to its design.  Fans of the original were also quick to deride it for its perceived faults, most notably a poor-quality translation that resulted in a lot of meme-worthy dialog and muddied story points (famously, one element that got a lot of praise - depicting two characters in a positive gay relationship - was simply the result of poor wording and not actually intended by the game's writers).  Over time, however, people warmed up to the game, regarding it as a solid, if not outstanding, sequel to the first and a logical step forward for the series.

I'm actually in a bit of an odd middle ground there; while I didn't play Wild Arms 1 until many years after the fact, I did play through and enjoy Wild Arms 2 when it was relatively new (particularly as I was in the mood for an RPG modeled on the 16-bit style).  While it obviously took more inspiration from games like the SNES Final Fantasies and Zelda than it did from more modern, "Movie-like" RPGs, it nevertheless captivated me with its strong presentation, well-paced gameplay and smooth design.  Wild Arms 2 again melds 2D and 3D graphics in a creative way, with 3D environments throughout the game but 2D character sprites for smoother animations outside of battle.  The three-year technological leap is very evident too, with almost no grainy textures, a much smoother framerate overall.and some surprisingly good visual effects (like certain attacks being portrayed from multiple camera angles in split-screen).  Audio design is similarly updated, retaining the same high-quality music as the original but much fewer distracting stock sound effects in battles.

Wild Arms' gameplay is largely retained, though with a few twists made to prevent it from becoming too monotonous. A notable difference is that the combat system does away with MP for special attacks. Instead, these are now governed by the Force gauge - once it rises above the required amount, you can cast that spell as many times as you wish until it falls back below the threshold.  The spell-learning system also has some new quirks, with more powerful Crests available that can multiply a spell's power by 1.5 or halve their FP cost, and even some entirely new types of magic for two of the new characters.  Tim learns spells by equipping a medium and killing a certain number of enemies, for example, while Marivel works somewhat like the Blue Mage class from Final Fantasy, learning certain spells from enemies with her Skill Drain ability.  Gaining levels also proves more impactful now - one's Force bar at a total equal to their current level, and they now gain "Personal Points" that can be spent to gain permanent bonuses like resistance to status effects, more HP gain per level or having a higher chance to counter-attack.  Spending these wisely is another very important part of the game's strategy, as it can make a drastic difference in the game's overall difficulty.  Dungeons are also considerably more convoluted now owing to the 3D layout, but efforts are made to help prevent you getting lost - the game provides a compass to follow, and each dungeon is also littered with HP-restoring "gems" that help you to keep track of paths you've already taken.  The world map has some twists of its own - towns and secret items are not readily visible until you "scan" for them to reveal their whereabouts.  Some can be determined by deciphering clues given to you from story context and NPCs in towns, but others are simply a bonus for exploring around as much as possible.

As one would expect from a sequel, there are also many more playable characters this time - a total of six, in fact.  Ashley is a relatively balanced character who utilizes Arms, Brad also uses Arms and is a slower, but heavier-hitting powerhouse, while Lilka is a Crest magic caster who operates very similarly to Cecelia from the first game.  Tim is another caster, though with a heavier emphasis on summon magic (learning mundane spells from having them equipped and having the ability to get more mileage out of summons than most characters).  Kanon is a weaker but speedier fighter who utilizes cybernetics and learns new special moves based on random chance influenced by her current Luck, while Marivel learns spells from enemies and summons various robots to attack her foes.

As in the last game, each character also has their own set of Tools, which play a significant part in solving puzzles or just providing conveniences for the player (like finding treasures that aren't readily visible).  The puzzles are quite a bit more varied and involved than the first game's too, often requiring some creative thinking - for instance, Ashley's throwing knives will actually fall when they hit a wall or other solid object, which can be used to hit a switch beneath him that he couldn't otherwise get to.  One will also frequently have to revisit dungeons later on when they have a tool to clear a particular obstacle they couldn't before if they want to experience everything in the game.

Wild Arms 2 certainly didn't skimp on the extra features, either.  As in the first game, you can redesign the UI's windows and icons to your heart's content, and even enable a screensaver for when the game is left idle for more than a few minutes at a time.  One has the option to name almost every major character in the story, playable or not, which is a bit unusual for games of this type.  More usefully, one has the ability to cancel random encounters - if a weaker enemy is about to attack, the player will see an exclamation point appear about their character's head.  Pressing the cancel button during this moment (default Circle) will cause the fight to be skipped completely.  However, one will still have to fight a fair bit to get above the enemy's level to enable this option, and "surprise attacks" can still occur, forcing the player into a fight with no opportunity to cancel it.

So, despite a spotty translation, I think that Wild Arms 2 is a significant improvement over the first game.  It has a fun storyline with some interesting twists, an impressive presentation despite its simpler and cartoonier aesthetic than the norms of the time, and plenty of gameplay expansions from the first that help it come into its own unique niche.  Combat mechanics are given much more variety, and while still rather monotonous (nearly all normal enemies die in one hit while bosses rarely involve more strategy than "spam your most powerful attacks at them"), the fact that most mundane battles can now be skipped significantly improves the pacing.  I enjoyed playing through it at the time, and while it is a more fun experience than the original, it's still not one that's held up particularly well over time. 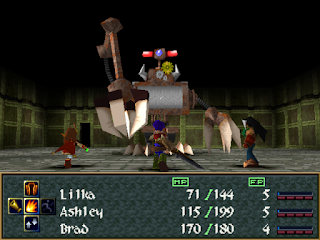 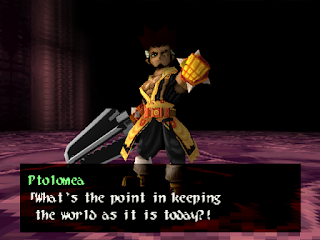