A Metroidvania action-RPG with a combat system inspired by Valkyrie Profile, which endured several delays and setbacks before its eventual release.  But is this another crowdfunding success story for 2019, or does Indivisible just prove to be a long-awaited letdown? 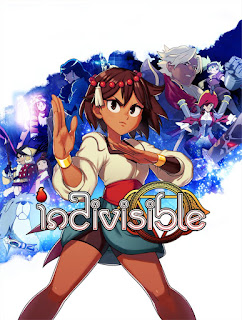 Lab Zero, despite having only one real title to their name (Skullgirls and its later iterations, Encore and Second Encore) has become an indie darling, combining high-quality animation and creative character designs with surprisingly polished, innovative gameplay. For those reasons, and the clear passion of its designers and community, Skullgirls is a game that has maintained a sizable following even years after its release - a rarity for a genre that seems to get new high-profile entries on an almost monthly basis.  However, the rights to the game itself are a bit of a snafu, being held by the company they spun from (Autumn Games) and ensuring that most profits from the game don't actually go to them.  So, with the backing of 505 games, they released a playable prototype of their next project, Indivisible, with a crowdfunding goal of 1.5 million dollars to expand it into a full game.  Eventually, this goal was met and surpassed (ultimately acquiring 1.9 million) and the game underwent development, being released four years later after a number of delays and setbacks.

I was one of those backers, and after playing the prototype and the backer-exclusive preview (which showed off a few more characters and some gameplay tweaks added in the interim), I only got more excited to play the final game.  But the day has finally come, and I can safely say that it did not let me down.

As was mentioned from the start, Indivisible's gameplay is very much inspired by that of Valkyrie Profile, combining platforming elements with an action-oriented combat system that places heavy emphasis on racking up combos to maximize damage, with each of the four party characters assigned to a single button and doing differing attacks depending upon the direction pressed on the D-pad or analog stick during their attack.  This operates on a time scale somewhat similar to the Active Time Battle from the Final Fantasy series, with a character able to perform an attack at any time they have a pip, and others on their team able to attack during their "turn" to create longer combos (which applies to both the player and enemies).  Any time a turn isn't happening, pips will steadily regenerate, with the exact rate depending upon the character.

However, Indivisible takes the idea and incorporates a lot of fighting game paradigms in as well - enemy attacks can be blocked by pressing a character's button, or a left shoulder button to have the entire party block at once.  Perfectly-timed blocks (pressing the button the instant an attack would connect) grant a number of benefits - at lower defense levels they will significantly reduce damage taken, build special meter and prevent KO even if a character would normally be reduced to 0 HP from an attack.   At higher levels they become even better, letting the player completely negate the attack and actually restore a small amount of health for each perfect block.   Meter, in turn, can be used as in a fighter, letting a character perform a powerful attack (with more bars spent generally resulting in a more powerful attack) or utilize Ajna's inherent ability to heal the party and revive fallen members.  Careful meter management quickly becomes a part of the overall strategy, especially as unblocked attacks can quickly devastate your party.

Indivisible does a great job diversifying its cast as well - there are a total of twenty-five playable characters, and each has unique mechanics and abilities to experiment with.  For example, Dhar's down-attack lets him store energy to power up his other two attacks (indicated by up to twelve rocks hovering around his person, which humorously persist even in cutscenes).  Razmi's down-attack can "Hex" enemies, slowing and causing them to take more damage for a short time, while Ginseng and Honey's main attack powers up their up-attack, which not only does damage but heals the party without having to spend meter.  A lot of the fun of the game is trying out each of the new characters you recruit, and as only a handful of them are strictly required, going searching for more is always a thrill in itself.

What sets Indivisible apart from other Metroidvania RPGs, though, is that it has some some of the most seamless gameplay I've seen in games of this type.  The shifts from platforming to combat and back again with no visible pause in most cases, and even shifting into Ajna's inner realm (where one can converse with other characters or power up) requires absolutely no loading - you just hold a button and press Up and you're there in an instant.  Health and iddhi meters are retained between battles, and traps in the environment will cause HP damage, putting the player at a disadvantage in the next fight. This even gets used to clever effect during boss encounters, with combat abruptly stopping to have the player evade projectiles and traverse obstacles on the way to the next phase of the fight, and popping the player right back into combat once they catch up.  Even viewing the map is worked into this philosophy - stop and hold Up for a moment to view your surroundings quickly. There's really never a dull moment in Indivisible's gameplay, and it almost completely avoids the stop-and-go feel most of RPGs.

The platforming element is masterfully done too.  Unlike Valkyrie Profile, where it was relatively generic (save for the need to tediously stack ice blocks to reach hidden treasures), here it feels just as dynamic and challenging as the combat.  Vanishing platforms, activating switches and utilizing one's expanding moveset - from hopping up walls with the axe to sliding through narrow gaps to breaking barriers down with a bomb arrow or a dash - quickly become a key part of the experience.  As in any Metroidvania style game, new abilities both grant access to new areas and let you backtrack to previous ones, clearing obstacles you couldn't get through before to find goodies.  Thankfully, Indivisible's levels are also well-designed enough that this never feels like a chore - once you have the ability you need to get every last item in an area, you're almost always afforded a quick way back out through it too.

Another joy of the game is its overall presentation.  There is little surprise that the animation and visuals are of exceptional quality - that being Lab Zero's hallmark since the days of Skullgirls - but it really can't be understated that Indivisible is a gorgeous game.  Each area you encounter is a thrill to see, with towering mountains, statues, light rays coming through cracks in the ceiling, and detailed architecture adding tremendously to the atmosphere.  Enemy and playable characters alike sport staggeringly large numbers of animation frames, and like any good fighter, recognizing exact ones in an attack can aid tremendously with parrying attacks and blocking.  The soundtrack is incredible, adding a lot of personality to the locales, though that's not surprising considering it's provided by none other than Hiroki Kikuta, probably best known for the soundtracks to Secret of Mana and Trials of Mana on the SNES.  The voiceover in the game is a treat too, with both well-known actors (Michael Dorn, Christina Vee, Stephanie Sheh) and a number of lesser-known names providing dialog, adding much to the characters' charm and humor with their unique talents.  Seeing the inner realm grow as more characters are added - not just playable characters, but NPCs who offer services like changing your character's "costumes" (color palettes) and allowing you to practice combos with a number of non-aggressive "dummy" enemies - is fun in its own right, though it's not taken to the same level as Suikoden, for example.

All of these things make Indivisible a quite fun experience, as does a relatively reasonable length by modern RPG standards (approximately 30 hours) that ensures it doesn't overstay its welcome and lends itself well to replayability and speedrunning.  However, its launch didn't go off completely without a hitch - some preorder bonus codes were faulty and had to be reissued, and two characters planned for the game were also left out at launch difficulty implementing their mechanics (Sangmu and Antoine).  More characters were planned as post-launch DLC too, including numerous guests from other indie games (Shantae, Red from Transistor and Shovel Knight to name a few), but sadly none of these are likely to be added; Lab Zero dissolved due to internal strife and the rights to the game remain with 505 Games, who have shown no desire to hand it off to another team (or even the same devs now at Future Club) to see it finished.  However, we did at least get an update that adds couch co-op for up to four players and a New Game Plus mode that makes the game significantly tougher.

So, when all is said and done, was Indivisible worth my backing and four years of waiting?  I think it was.  Its unique blend of mechanics and virtually seamless gameplay is captivating, it's a great experience for the eyes and ears, and as in any good Metroidvania, uncovering secrets and mastering the finer points of the mechanics to complete the game more and more efficiently is a constant thrill.  It stands out further with relatively unique southern Asia inspired setting, charming characters and telling a good story while maintaining a relatively jokey, irreverent mood throughout.  Its may not be the best of its kind at any one thing it does and knowing that it will likely never be finished owing to the amazing douchebaggery of its lead programmer is pretty tragic, but it's a fun tale with a great sense of humor and combines several solid gameplay elements together into a cohesive and memorable experience, which makes it worth playing in my book. 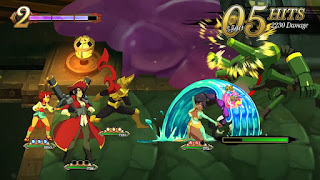 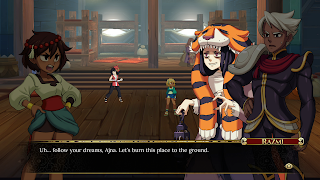